A Microbial Biorealm page on the genus Neoehrlichia mikurensis

A note on the conventional use of "Candidatus"

Generally, the Candidatus designation is italicized and the genus/species is in plain Roman type such that, "Candidatus Genus species". Candidatus can be abbreviated Ca. such that "Ca. G. species".[8]

Ca. N. mikurensis are gram negative cocci, generally 0.5-1.2μm in length. An obligate intracellular organism, it has been found in spleen tissue of rats infected with the bacterium. Ca. N. mikurensis is a pathogenic bacterium that has been found primarily in ticks and rodents in Europe and Asia. In 2007 three cases of confirmed human infection in and around Germany were reported, one of which was lethal. Based off of blood sample and 16S rRNA analyses from these cases, in 2010 it was determined that Ca. N. mikurensis was a novel human pathogen.[2] 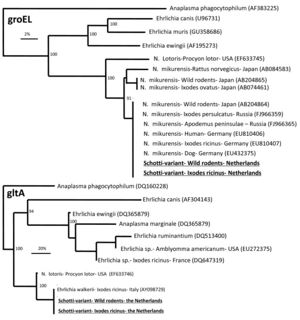 Phylogenetic tree of the GroEL (top) and gltA (bottom) genes of different Anaplasma and Ehrlichia species and their relation to N. mikurensis.[1]

Not much is known about the metabolism of Ca. N. mikurensis other than it is a facultative anaerobe. Blood samples of people infected with the bacterium have been gathered in aerobic and anaerobic flasks, and both scenarios presented the same 16S rRNA sequence. [4]

Ca. N. mikurensis tends to concentrate in the liver and spleen endothelium cells of small rodents and these small rodents transfer the bacterium to Ixodes ricinus tick larvae, as these rodents are their main food source. These central and eastern European I. ricinus ticks act as the vector for the microbe most commonly, which can infect humans via a tick bite. [1] Studies have suggested that approximately 8.1% of I. ricinus ticks may have the bacterium present. [5] 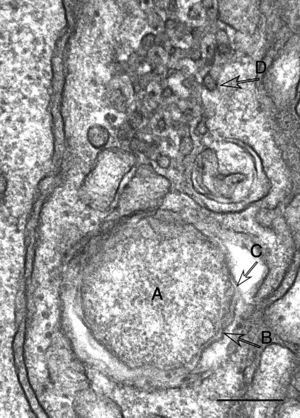 (A). The arrows indicate the thin, rippled, bileaflet outer membrane which is characteristic of Ca. N. mikurensis (B), the irregular, narrow periplasmic space between inner and outer membranes, also characteristic (C) and canalicular system of the endothelial cell (D). Bar, 0·3 μm.[1]

Transmission electron microscopy of spleen tissue from rats carrying Ca. N. mikurensis showed groups of small cocci surrounded by an inner membrane and a thin and rippled outer membrane. These colonies have been found primarily in membrane-bound inclusions within the cytoplasm of endothelial cells. [4] As cells haven’t been cultured in vitro yet, not much else is known about colony structure. [5]

Until recently the infection caused by Ca. N. mikurensis was unnamed, but after a slew of infections involving humans were diagnosed in 2010, the infection was dubbed “neoehrlichiosis” [7]. In most reported cases of neoehrlichiosis there persists a high and intermittent fever, with some ranging above 39˚C (102.2˚F). Other common symptoms in infections include anemia, unconsciousness and deep vein thrombosis. [4]

In one case from 2007, a 69 year old German man who had been suffering from an unknown illness for several months was diagnosed with what would come to be known as neoehrlichiosis. Symptoms included daily high fever (up to 39˚C), night sweats, a non-productive cough, hypochromic anemia, and occasional bouts of diarrhea. Blood and bone marrow analysis revealed the presence of Ca. N. mikurensis and a course of doxycycline was administered for three weeks. All symptoms alleviated quickly and within one month the patient tested negative for the presence of Ca. N. mikurensis.

Another case in 2008 involved a typically healthy 58 year old man. After a persistent three-day head ache the patient’s wife found him unconscious and he was brought into the ICU. He displayed far more severe symptoms including intracerebral and subarachnoid hemorrhaging as well as an aneurysm. Present again was the daily high fever (hovering just above 39˚C). Several drugs were administered but after eight days in the ICU the patient died due to septic multiple organ failure caused by the infection. A blood sample taken after death was analyzed and revealed an infection of Ca. N. mikurensis.

A specific mechanisms of infection has not yet been agreed upon, however the disease propagates strongly in the spleens of lab rats in membrane bound inclusions. [2][4] In 2010, eight cases of infection around Zurich were reported with high fevers, weight loss, and general malaise. All of the patients from the Zurich area presented compromised immune systems, but there have been cases of healthy individuals being infected with the disease in China via tick bite. [3] Infection may not be immediate as 20% of people who have pulled feeding and infected ticks off of themselves may prove to be asymptomatic. [5]