Difference between revisions of "Nitrosomonas" 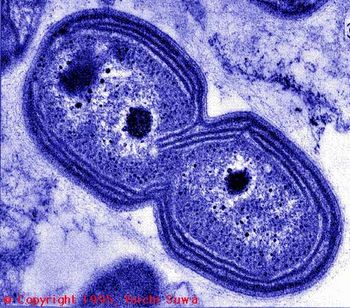 Nitrosomonas. Image from The Microbe Zoo (by Yuichi Suwa).

Nitrosomonas is a genus of ammonia-oxidizing proteobacteria. They are important players in wastewater treatment plants, where they get rid of excess ammonia by converting it to nitrite. One species, Nitrosomonas europaea, is especially interesting because of its unique metabolism (see Cell Structure and Metabolism). 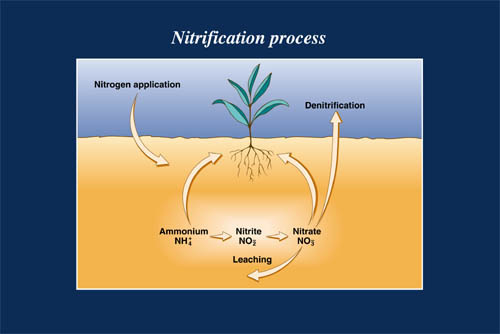 Image from College of Agricultural, Consumer, and Environmental Sciences--U of Illinois Urbana-Champaign.

Nitrosomonas are rod-shaped chemolithoautothrophs with an aerobic metabolism. While they do not grow by photosynthesis, their unusual metabolic behavior involves burning ammonia with oxygen. Long, thin membranes inside the bacteria's cell use electrons from ammonia's nitrogen atom to produce energy. In order to complete cell division, Nitrosomonas must consume vast amounts of ammonia, making the division process last for several days. The cells grow either in pairs or short chains. In nitrification Nitrosomonas plays the role of oxidizing ammonia to nitrite, which is then converted to nitrate by other bacteria.

Nitrifying bacteria such as Nitrosomonas play an important role in providing nitrogen to plants and limiting carbon dioxide fixation. They are found widely distributed in soil or water, where there are large amounts of ammonia, such as lakes or streams into which treated and untreated sewage is pumped. Nitrosomonas does whatever it can to avoid light, and so may appear as clumps of slime in order to protect itself. It is often found on the walls of stone buildings or on the surface of monuments, where its production of nitric acid from the air may cause erosion of the stone beneath. While in some respects Nitrosomonas' effect on ammonia is positive, agriculturally it can pose a problem. Nitrification, the cycle in which Nitrosomonas acts as the initiator by oxidizing ammonia to nitrite, can leave the nitrate in the soil more susceptible to leaching and therefore less available to plants. There are some nitrification inhibitors which slow the nitrification process, making it less possible for the nitrate to be lost due to leaching.