Difference between revisions of "Nitrosopumilus maritimus" 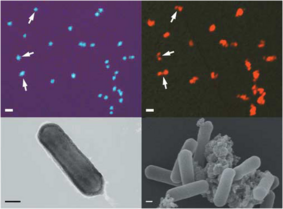 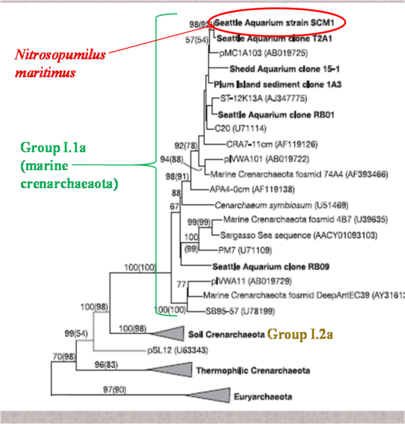 Figure 2. Phyllogenetic relationship of N. maritimus within the Crenarchaeota. From Könneke et al., 2005. 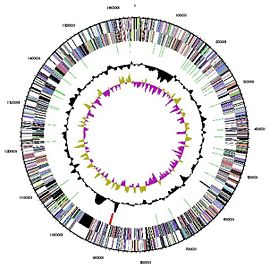 Globally, the group 1.1a (marine) crenarchaeota population is estimated at 1.3 x 1028 cells, or 20-30% of ocean picoplankton (Karner et al., 2001). Metagenomic, biomarker, process-rate, and PCR-based approaches have demonstrated that group 1 crenarchaeota function as nitrifiers in a variety of mesophilic aerobic environments. In the North Sea, ammonia oxidation corresponded to increasing cell number and amoA copies of crenarchaea sharing close sequence identity to N. maritimus, while bacterial amoA copies remained 1-2 orders of magnitude less than archaeal amoA during nitrification (Wuchter et al., 2006). Analysis of amoA and 16s-rRNA DGGE profiles of ammonia oxidizers in soil mesocosms showed that increases in the relative abundance of archaeal sequences most related to group 1.1a crenarchaeota paralleled the nitrification rate, while significant changes in the AOB community structure during nitrification were not found (Tourna et al., 2008). Although per cell rates of ammonia oxidation are less for AOA (2-4 x 10-15 mol NH3 cell-1∙day-1 (Wuchter et al, 2006)) than AOB (6-20 x 10-15 mol NH3∙cell-1∙day-1(Ward, 1987), findings of 1-3000x higher abundance of AOA compared to AOB in soil (Le Roux et al, 2008; He et al., 2007; Leininger et al., 2006) and marine (Karner et al., 2001; Wuchter et al., 2006) environments provides evidence that archaea, rather than bacteria, may be the most important nitrifiers on earth. Overlapping metabolic niches of AOA and AOB (Shauss et al., 2009) may explain the large variation of AOA:AOB in natural environments. Until more representatives of group 1.1a crenarchaeota are cultivated, use of N. maritimus as a model species could facilitate advances in understanding of the genetic and physiological basis of archaeal ammonia oxidation.

Since group 1 crenarchaeota are chemoautotrophic and often outnumber AOB in nitrifying environments, it is likely that they are key global intermediaries in C and N cycles. Putative genes coding for novel crenarchaeal metabolisms (e.g., denitrification, nitrogen fixation, or heterotrophy) have been recovered from environmental samples (Prosser and Nicol, 2008). N. maritimus cultures could be utilized to determine whether putative genes are functional (Martin-Cuadrado et al., 2008), similar to the approach used to confirm ammonia oxidation by N. maritimus (Könneke et al, 2005). If putative genes are operational, coupling of gene copies and/or expression with metabolic end products in situ would have implications for models of global C and N cycles (Prosser and Nicol, 2008). Continued research on AOA is necessary for advancing knowledge of biogeochemistry (Francis et al., 2007), and cultures of N. maritmus may prove useful for this purpose.

It has been estimated that pelagic crenarchaea fix 3.3 x 1013 mol∙C∙yr-1 (Wuchter et al., 2006). Genes coding for key enzymes in the 3-hydroxypropionate/4-hydroxybutryrate pathway have been amplified from naturally-occurring populations of mesophilic AOA, which implies that group 1 crenarchaea, including N. maritimus, may fix C by a different means than plants and cyanobacteria (Berg et al., 2007). By comparing 13C signatures of surface dissolved inorganic carbon and AOA GDHT in pelagic waters of the North Pacific Ocean, autotrophy was estimated to account for 83% of marine crenarchaeal biomass C, while remaining C was assimilated by populations of mixotrophic or co-occurring hetero- and autotrophic crenarchaea (Ingalls et al., 2006). This finding suggests that autotrophy predominates in mesophilic AOA. Future studies could investigate environmental and genetic factors in the occurrence of heterotrophy in pure cultures of N. maritimus and mixed populations of mesophilic AOA. 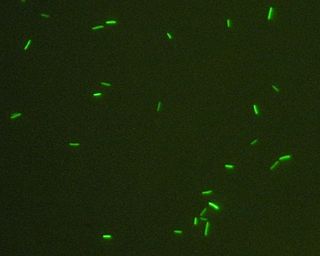 Genome sequencing of N. maritimus was completed in 2007 with funding from the US DOE Joint Genome Institute (JGI-PGF). Sequence data is available online, www.ncbi.nlm.nih.gov/sites/entrez?db=genomeprj&cmd=Retrieve&dopt=Overview&list_uids=19265, but a formal description has not been published in a peer-reviewed scientific journal. Its genome is circular, 1.65 x 106 Mb in length, codes for 1795 putative proteins, and has a GC content of 34.2% (Figure 3). The entire complement of genes required for ammonia oxidation (amoA, amoB, and amoC) are also present in the genome of N. maritimus (Könneke et al., 2005). Both frz and cdv genes are present in its genome, indicating that N. maritimus may fuse cell division characteristics of crenarchaeaota and euryarchaeatoa (Lindas et al., 2008). A study of 16s rRNA found that recombination, rather than mutation, is the primary mechanism for evolution in group 1.1.a crenarchaeota (Martin-Cuadrado et al., 2008).

This microorganism was isolated from the rocky substratum of a tropical marine tank at the Seattle Aquarium (Seattle, Washington, USA) (Figure 2). Although archaea were previously characterized as extremophiles, mesophilic archaea are now recognized to be an ubiquitous component of marine plankton (Francis et al., 2007).

Chemolithotrophy enables organisms to inhabit oligotrophic environments where they may function as important primary producers. In environments devoid of organic energy sources and sunlight, the oxidation of ammonia could contribute to primary productivity, and may explain the success of some marine Crenarchaeota in ecological niches such as deep-ocean and polar surface waters in winters. (Könneke et al, 2005) 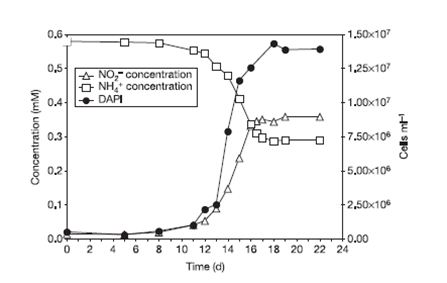 Figure 5. Near-stoichiometric conversion of ammonium to nitrite in a pure culture of N. maritimus. From Könneke et al. 2005.

Nitrosopumilis maritimus has straight rod shaped cells and are smaller than the cultivated bacterial ammonia oxidizers. These cells have a diameter of 0.17-0.22 μm and a length of 0.5-0.9 μm, and may occur individually or in loose aggregates (Figures 1 and 4). The size and morphology of these microorganisms were found similar to other marine Crenarchaeota (Könneke et al., 2005).

Cell membranes of N. maritimus are composed of glycerol dialkyl glycerol tetraethers (GDGTs) with hexose, dihexose, or phosphohexose headgroups. The membrane lipid profile of N. maritimus is dominated by crenarchaeol, a GDGT with a cyclohexyl moieties once thought to be a biomarker signature of non-extremophilic crenarchaeota, prior to its recovery from hot spring environment (Shouton et al., 2007).

It is the first reported chemolithoautotroph nitrifier in the domain archaea and the first mesophilic isolate within the phylum Crenarchaeota. The presence of 3-hydroxypropionate pathway suggests autotrophic metabolism by Nitrosopumilus (Berg et al., 2007). It grows chemolithoautotrophically by oxidizing ammonia to nitrite. This hypothesis is supported by the parallels between the depth of the marine nitrite maximum and the vertical distribution of Crenarchaeota in the ocean.

The researchers incubated enriched cultures of crenarchaeota with 1 μM of ammonium chloride and they observed that the increase in the abundance of the crenarchaeota was proportional to oxidation of ammonia to nitrite, indicating nitrification (Figure 5). The cultivation of this microorganism from a defined medium containing bicarbonate and ammonia as sole carbon and energy sources and a growth inhibition with addition of organic compounds confirm their autotrophy.

Bayer, K., Schmitt, S., and Hentschel, U. 2008. Physiology, phylogeny and in situ evidence for bacterial and archaeal nitrifiers in the marine sponge Aplysina aerophoba. Environmental Microbiology 10:2942-2955.

Prosser, J. I., and Nicol, G. W. 2008. Relative contributions of archaea and bacteria to aerobic ammonia oxidation in the environment. Environmental Microbiology 10:2931-2941.

Ward, B. B. 1987. Kinetic studies on ammonia and methane oxidation by Nitrosococcus oceanus. Archives of Microbiology 147:126:133.