Difference between revisions of "Nodularia Spumigena" 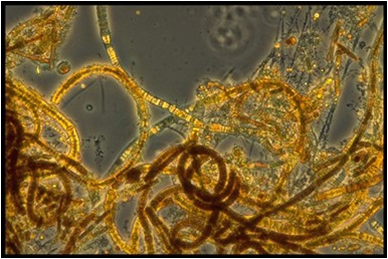 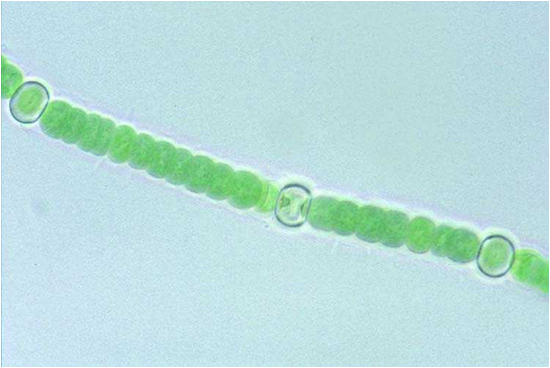 Nodularia spumigena is a filamentous, planktonic, photosynthetic, diazotrophic, bloom-forming cyanobacterium.It is usually found in salty or brackish waters. It is one of the dominating species during the extensive cyanobacterial blooms in the Baltic Sea, which are one of the largest in the world. It is also found in Lake Alexandrina, in the south-east of southern Australia. The first documented outbreak was recorded by Francis in 1878. It is commonly found near the surface of the water because is has a high tolerance of ultraviolet radiation.

The genome sequencing is currently underway at the Gordan and Betty Moore Foundation Microbial Genome Sequencing Project, but it not yet finished. The DNA length is 5,316,258 nt (5 Mb). The G-C content is 42.0%. There are 4860 genes coded for and 80% of the genome is coded. The number of chromosomes and shape of the genome is not yet known.

Nodularia spumigena has a photosynthetic metabolism. It has a filamentous structure including enlarged cells called heterocysts. These heterocysts are specialized cells for atmospheric nitrogen fixation. No photosynthesis occurs in these specialized cells. It is responsible for a large part of the new nitrogen input into the Baltic Sea. Mycosporine like amino acids (MAAs) are produced as a photo-productive strategy against ultraviolet radiation. This allows the organism to live closer to the surface of the water, while other cyanobacteria must live in deeper waters.

Nodularia spumigena produces the hepatoxin nodularin. Hepatoxins are toxins which affect the liver. Nodularin is a tumor promoter known to have killed wild and domestic animals by seriously affecting the liver. It is a liver carcinogen due to the inhibition of protein phosphataes. Research is focused on environmental factors affecting growth and toxin production. Higher salinity levels and lower ultraviolet radiation leads to more production of the nodularin toxin.

Vuorinen, Pekka. et al."Accumulation and Effects of Nodularin from a Single and Repeated Oral Doses of Cyanobacterium Nodularia spumigena on Flounder ( Platichthys flesus L.) ." Archives of Environmental Contamination and Toxicology (2008).