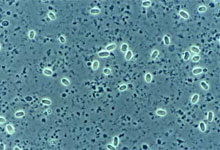 Nosema ceranae, a microsporidium fungi, is part a member of the Nosematidae family. N. ceranae is a spore forming, rod or oval shaped microbe that measures approximately 3.9-5.3 µm in length and 2.0-2.5 µm in width. Nosema ceranae has three developmental stages: Meronts, which is the earliest stage, and during this stage the plasma membrane of the microbe makes direct contact with the cytoplasm of the host. During sporont stage the microbe becomes elongated and oval and consists of a dense cytoplasm, yet there is no distinct internal structures. The third stage is the Sporoblast stage, the microbe is smaller during this stage than the sporont stage, and has a distinct cell wall as well as two nuclei [2]. A complete sequencing of N. ceranae's genome revealed a size of 7.86 MB with a strong AT bias [3]. 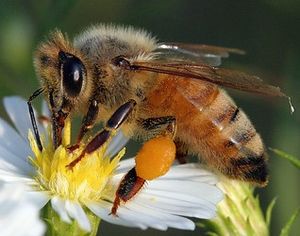 N. ceranae and the honeybee have a obligate parasitic relationship, meaning that the N. ceranae benefits while the honey bee is harmed throughout the process. N. ceranae forms spores which are then ingested by the honey bee through water or food. These spores then invade the gut epithelium immediately [3]. However, it is not until day six or seven that symptoms are visible such as ecoming less active, immobile, having an increase in appetite, and usually by day eight mortality has occurred [6,8]. The spores rapidly multiply in the gut and then are excreted and the spores are transferred to the other honeybees that live in the same colony through the cleaning and feeding activities [2]. Nosema ceranae decrease the ability of the honey bee to obtain nutrients from the environment which ultimately shortens their lifespan. Nosema ceranae can effect the overall colony growth and hinder winter survival [3].

There is no specific gene known to be disrupted or the cause of this infection. N. ceranae produces spores which then invade the cell, however molecular techniques such as Polymerase Chain Reaction (PCR), which amplifies a certain gene or part of a gene, allows us to see how the host cell is being effected. For example by using PCR and amplifying the 16S rRNA gene researchers are able to detect coinfection of the host by two different species [7].

This symbiont relationship between Nosema ceranae and Apis mellifera is a recent discovery, and new studies are continually done to uncover more about this parasitic relationship. Originally Nosema ceranae infected the Asian honey bee (Apis cerana), but has since then swtiched to the European honey bee (Apis mellifera). It is unknown when and how this switch occurred, and researchers are unsure if the predominant parasite of honey bees in Europe and North America still remains N. apis or if N. ceranae has taken over [3]. The biological cycle of Nosema ceranae relies on the temperature. Nosema ceranae effects more cells when kept at a constant temperature, but is a better adapter to conditions the other species such as Nosema apis. N. ceranae unlike N. apis can infect their host in all four seasons, while N. apis usually only infects their host in the milder seasons such as spring and autumn [5]. 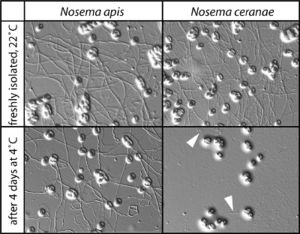 In past studies it was thought that N. ceranae was becoming the more prevalent parasite to the Honey bee, however recent studies have shown otherwise. N. apis in a 5 year long study showed to grow in greater quantity then N. ceranae except in one colony. However it was also found that N. ceranae is a more general infection, after displaying the ability to grow in other tissues then just the gut. In this five year long study N. ceranae was observed to grow in not only the gut, but the hypopharyneal glands, salivary glands, malpighian tubes, fat bodies, and the brain. This could account for the hypothesis that N. ceranae causes more deaths in honey bee colonies then N. apis. It was also found that N. ceranae during the germination process when exposed to low temperature decreased to less the 10 percent. The remaining spores that where able to germinate were unusually short and most likely did not complete the true germination process [4].