Difference between revisions of "Oomycota"

A Microbial Biorealm page on the Oomycota 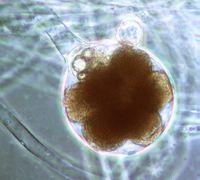 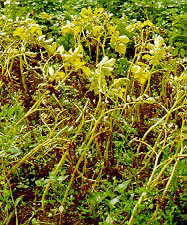 Oomycota is a phylum of filamentous protists containing over 500 species. The majority of these organisms are in the groups commonly known as water molds or downy mildew. "Oomycota" means "egg fungi", referring to the oversize oogonia which house the female gametes (eggs). Despite the name and their superficial appearance, oomycetes are not fungi. While some members of Oomycota are relatively harmless, some species are parasitic and negatively affect aquatic plants or organisms. Members of the genus Saprolegnia are examples of these parasites, which grow on fish scales or eggs and cause problems in places where there is a high population of fish, such as fish farms or spawning ground. Some parasitic oomycetes have affected the history of human populations through the infection of certain terrestrial plants. For instance, Phytophthora infestans, or late potato blight, spreads so rapidly through the leaves and tubors of potato plants that the disease destroyed almost the entire crop of potatoes in Ireland, leading to the Great Potato Famine of 1846. Other phytophthora species have been known to destroy tropical plants as well, such as eucalyptus and pineapple. Another native American parasitic oomycete, Plasmopara viticola, was transported to France in 1870 on grapevines which were used to stimulate the struggling French grape industry. The parasite made swift work of the remaining French plants, and was unstoppable until the discovery of the Bordeaux mixture. When applied to the leaves of the grapevines, this combination of lime and copper sulfate brought the disease to a halt. The use of the Bordeaux mixture is the first instance of the utilization of a chemical to destory plant parasites.

Sporangia of an Oomycete. Image from General Mycology, UArizona

Oomycete cells differ from those of true fungi in that they have walls of cellulose and the amino acid hydroxyproline. They are heterotophic, either saphropytic or parasitic. Oomycetes can reproduce asexually, by forming a structure called a sporangium or zoosporangium. Inside these sporangia, zoospores are produced, first the primary zoospore and then the secondary zoospore, which is laterally flagellated. Their flagellum allow the zoospores to move rapidly through water. This type of germination is most common among aquatic and soil-dwelling species. Oomycetes may also germinate directly on the host plant by way of a germ tube. Organisms of Oomycota may also reproduce sexually, by direct injection of the male nuclei (sperm) into the oogonium. This type of reproduction is known as "gametangical copulation".

Oomycota is responsible for the decomposition and recycling of waste in their ecosystem, which tends to be moist, cool areas such as damp soil and freshwater habitats. Parasitic species cause the destruction of crops in many parts of the world, and have wreaked havoc on agriculture throughout history. The most famous example of this destruction is Ireland's Great Potato Famine in 1845-48, when the oomycete Phytophthora infestans, accompanied its vegetable host to the British Isles. While the disease is controllable, the zoospores produced asexually are able to move at such a fast rate that they can overtake an entire potato field in a remarkably short amount of time. Species of Oomycota can be found the world over, including Europe, parts of Russia, Mexico, some South American countries, the United States, Canada, Japan, and Korea.

Introduction to the Oomycota . Museum of Palentology, UC Berkeley.