A Microbial Biorealm page on the genus Opalinids 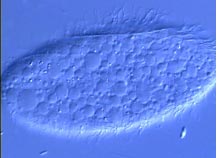 Opalinids are a oblonged protozoan which superficially looks like a ciliate because of its many flagella, which surround the body in parallel rows called kineties. There are over 150 different species of Opalinids. They are a endocommensal that lives inside the cloacal area of amphibians, but primarily in forgs and toads.

All attempted genome projects have failed, except for one which showed that Opalinids are part of the stramenopiles and are related to Proteromonas. Another study has shown that the specie Z. intermedia has 12 pairs of chromosomes which are all different shapes and sizes. 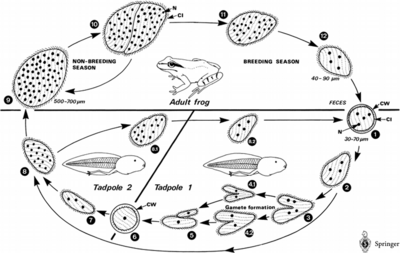 Opalinids reproduce both asexually and sexually. Asexually they reproduce by binary fission, which occurs by longitudinal-oblique binary fission. They reproduce this way for most of the year until mid-February to mid-April, but two weeks before this "mating season" the rate at which they reproduce asexually inceases rapidly. Sexually they reproduce by syngamy, which is anisogamous. The adults will go through plasmotomy to make themselves smaller and with fewer nuclei. They then encyst with 2-12 nuclei in each that pass out of the feces of the frog. They are then eaten by a tadpole in the water and excyst inside of it. Then two types of gemetes are produced, some larger macrogametes and some smaller microgametes. The anisogamous gametes then fuse and create a zygote. This zygote will divde often and then encyst and exit with the feces. It is eaten by a new tadpole and the process is repeated. Eventually it will stop and develop inside the tadpole until the next breading season (see diagram above).

Opalinids are a multinucleated (no macro or micro nucleus) protozoa with many flagella which are in a pattern called kineties. These kineties form parallel folds that allows interference of reflected light and opalescence. The cells can be either cylindrical, or flattened. Opalinids do not have a mouth, so they get the nutrition through picocytosis which involves using microfibrils for "cellular drinking". To do this the cell will engulf some protien-sized particles and dissolved solutes by creating an invagination and surrounding the food.

Opalinds always live inside another animal, almost always inside of amphibians. The only time they are outside the animal are during their reproductive cycle (see above), and if they are expelled form the animal in its feces. It does feed on the amphibian that it lives in, and the waste within it, but it doesn't harm it.