Difference between revisions of "Orthomyxoviridae"

A Viral Biorealm page on the family Orthomyxoviridae 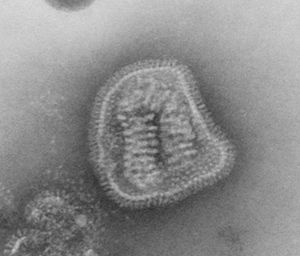 The orthomyxovirus gets its name from the Greek word 'myxa' that means mucus.

Influenza virus types A and B are both common causes of acute respiratory illnesses. Both virus types may cause epidemics of considerable morbidity and mortality but influenza B infections are often limited to localized outbreaks whereas influenza A viruses are the principal cause of larger epidemics including worldwide pandemics. Influenza occurs in winter epidemics that affect 1-5% of the population in temparate regions. Influenza can be contracted throughout the year in tropical regions and its contribution to overall morbidity and mortality is less well defined. (source: World Health Organization: Immunization, Vaccines and Biologicals)

Virion Structure of an Orthomyxovirus

The virions of an orthomyxovirus consist of an envelope, a matrix protein, a nucleoprotein complex, a nucleocapsid, and a polymerase complex. The virus capsid is enveloped. The virions are spherical to pleomorphic and filamentous forms occur. The virions are 80-120 nm in diameter and 200-300(-3000) nm long. The surface projections are densely dispersed distinctive hemagglitinin-esterase (HEF) spikes, or spaced widely apart hemagglutinin (HA) spikes. Clusters of neuramidase (NA) irregularly inerpose the major glycoprotein in a ratio of HA to NA about 4-5 to 1. There are about 500 spikes evenly dispersed or clustered and are covering the surface comprising hemagglutinin, or neuraminidase, or esterase-esterase. The surface projections are composed of one type of protein or different types of proteins and are 10-14 nm long and 4-6 nm in diameter. The nucleocapsid is elongated with helical symmetry and is segmented with loops at one end. The segments have different sized classes with clear predominate lengths with a length of 50-130 nm (in differnent class sizes) and a width of 9-15 nm. (source: ICTV dB Descriptions)

Reproductive Cycle of an Orthomyxovirus in a Host Cell

It takes about 6 hours for the replication of the orthomyxovirus, killing the host cell in the process. The virus attaches to the permissive cells via the hemagglutinin subunit, which binds to cell membrane glycolipids or glycoproteins containing N-acetylneuraminic acid, the receptor for virus adsorption. The virus is then engulfed by pinocytosis into endosomes. The acid environemnt of the endosome causes the virus envelope to fuse with the plasma membrane of the endosome, uncoating the nucleocapsid and releasing it into the cytoplasm. A transmembrane protein derived from the matrix gene (M2) forms an ion channel for protons to enter the virion and destabilize protein binding, allowing the nucleocapsid to be transported to the nucleus, where the genome is transcribed by vital enzymes to yield viral mRNA. Orthomyxovirus replication depends on the presence of active host cell DNA, unlike the replication of other RNA viruses. The virus scavenges cap sequences from the nascent mRNA generated in the nucleus by transcription of the host DNA and attaches them to its own mRNA. These cap sequences allow the viral mRNA to be transported to the cytoplasm, where it is translated by host ribosomes. The nucleocapsid is assembled in the nucleus.

Virions acquire an envelope and undergo maturation as they bud through the host cell membrane. The viral envelope hemagglutinin is subjected to proteolytic cleavage by host enzymes during budding. This process is necessary for the released particles to be infectious. Newly synthesized virions have surface glycoproteins that contain N acetylneuraminic acid as a part of their carbohydrate structure, and this are vulnurable to self-agglutination by the hemagglutinin. A major function of the viral neuraminidase is to remove these residues. (source: Medical Microbiology)

Influenza virus is transmitted from person to person primarily in droplets released by sneezing and coughing. Some of the inhaled virus lands in the lower respiratory tract, and the primary site of the disease is the tracheobronchial tree, although the nasopharynx is also involved. The neuraminidase of the viral envelope may act on the N-acetylneuraminic acid residues in mucus to produce liquefaction. This liquified mucus may help spread the virus through the respiratory tract in concert with the mucociliary transport. The superficial mucosa suffers cellular destrcution and desquamation because of the infection of the mucosal cells. Nonproductive cough, sore throat and nasal discharge are some sysmptoms that result from the endema and mononuclear cell infiltration of the involved areas. The cough may be persistent but the most prominent symptoms of influenza are systemic-- fever, muscle aches and general prostration. These systemic symptoms are not caused directly by the virus because viremia is rare. A possible cause is circulating interferon, as administration of theraupetic interferon causes systemic symptoms resembling those of influenza.

The evidence so far indicates that the extent of virus-induced cellular destruction is the prime factor determining the occurence, severity and duration of clinical illness. It is possible to recover virus from respiratory secretions for 3 to 8 days in an uncomplicated case. At times of maximal illness, peak quantities of 104 to 107 infectious units/ml are detected. The titer begis to drop in concert with the progressive abatement of disease after 1 to 4 days of peak shedding

The infection may extensively involve the alveoli, particularly in patients with underlying heart or lung disease. This may result in interstitial pneumonia, sometimes with marked accumulation of lung hemorrhage and endema. Pure viral pneumonia of this type is a severe illness with a high mortality. Virus titers in secretions are high, and viral shedding is prolonged. However, in most cases, bacteria is the causative agent of pneumonia associated with influenza. Examples include pneumococci, staphylococci, and Gram-negative bacteria. The preceding viral infection damages the normal defenses of the lung, setting the stage for the bacteria to invade and cause disease. (source: Medical Microbiology)