Oxalobacter formigenes is a nonmotile, non-spore-forming, gram negative beta-proteobacterium that colonizes the human large intestine (colon) [5] This organism has also been isolated from the gut of ruminant and other non-ruminant herbivores [2]. O. formigenes is a strict anaerobe and is thought to be largely important in the metabolism of oxalate in the large intestine that may be remaining from the diet or a byproduct of host metabolism [5]. The absence of O. formigenes is thought to be a cause of hyperoxaluria and the formation of calcium oxalate stones in the kidney [6], and it is thought that O. formigenes may be useful as a probiotic agent for the treatment of these conditions [5].

Two separate shotgun sequencing projects are currently under way to sequence the genome of O. formigenes, Neither of these projects are complete (and they each have many unresolved contigs). The length of genetic material currently sequenced is approximately 2.4 MB for both projects, and the GC content of this sequence approximately 50%. The currently available sequence likely does not encompass the entire genome due to toxic or unstable (unable to be cloned) portions of the genome. The genome has not yet been annotated, and the number of chromosomes and characteristics of the genome (such as circularity or linearity) are unknown [7].

Oxalobacter formigenes is a rod-shaped, gram negative obligate anaerobe. This organism requires oxalate as a source of carbon and energy in order to survive [4,5]. Most anaerobes that metabolize oxalate produce carbon dioxide and formate, and the formate is then further oxidized by dehydrogenases. O. formigenes is unique in that it produces formate as an end product. The oxalate taken in by the cell can be decarboxylated to regenerate formate for export, or further metabolized for the production of glycerate (See Figure 1) [1]. Additionally, O. formigenes has not been documented to utilize glycolytic pathways, and is thus unable to grow on sugars [5] O. formigenes utilizes an oxalate/formate antiporter system to generates a proton motive force for the production of ATP (energy) [5]. The antiporter system creates an electric potential (negative inside) by the inward transportation of oxalate and the outward flow of formate. Decarboxylation of oxalate consumes a proton that 'virtual' proton gradient, which is used for the synthesis of ATP [3]. Due to the unique oxalate pathways that produce formate and carbon dioxide, the growth yield for O. formigenes is low (only producing 1.0-1.1 grams of cells per mole of oxalate degraded). [2] 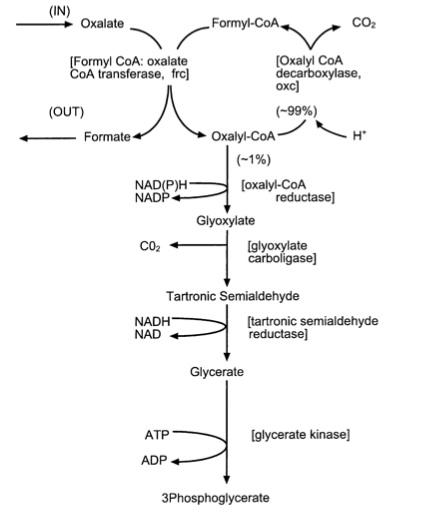 The habitat of this organism is the large intestine of the human gut, and although it is not initially found in the gut at birth, O. formigenes quickly is established in the gut microflora [4]. O. formigenes plays a unique role in the gut microflora in that it is capable of metabolizing 70 to 100 mg per day of oxalate. [4]. Although soluble dietary oxalate is absorbed in the human small intestine, O. formigenes fulfills the role of metabolizing the remaining dietary oxalate and oxalate produced by the host's metabolism, which can otherwise accumulate, leading to hyperoxaluria and the formation of calcium oxalate stones, which are harmful to the human host [6]. This can be considered a symbiosis, in that the organism, a strict anaerobe, is given a safe environment to live and reproduce, along with a steady supply of oxalate to consume. In addition, O. formigenes confers a benefit to its human host in the sense that it degrades the otherwise toxic excess oxalate in the large intestine. O. formigenes is not explicitly pathogenic.