A Microbial Biorealm page on the Oxymonads 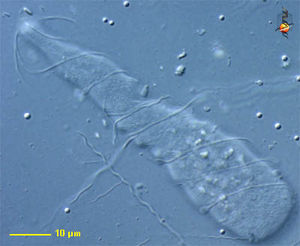 Oxymonads are a group of eukaryotic protists which live almost exclusively in the guts of wood-eating insects such as termites. They appear to play a role in the digestion of wood, although their exact function within the host is unknown. In turn, the oxymonads also play host to certain kinds of bacteria, which also probably play a role in wood digestion, although the part they play is not certain. There is some question about the oxymonads' taxonomy, and whether it is possible that they are the living relatives of the earliest protists. The oxymonads' lack of certain organelles (see cell structure) has led some scientists to place them fairly low on the Eukaryotic tree. Recent studies performed on the ssu rDNA from species of oxymonads and a similar group, the Trimastix, reveal that the two groups are closely related. This result necessitates a revamping of many theories on the eukaryotic phylogenic tree.

Little is known about oxymonad genetics. One study compares oxymonads with Trimastix. As reported by Dacks et al. in 2001, the small-subunit ribosomal RNA genes of three isolates of Trimastix and an oxymonad were sequenced, and found to be similar enough to conclude that these are sister groups. Although there is little or no evidence demonstrating a similar connection with any other eukaryotic groups, this conclusion has yet to be confirmed. For more information on the method and analysis of this study, as well as evolutionary implications, click here. 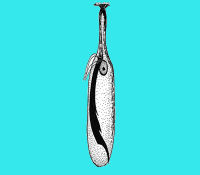 Oxymonads are flagellated cells. They are club-shaped and are anywhere from 5-165 microns in size. They possess four flagella used for locomotion in the free-swimming cells and the nucleus is generally located anteriorly. There is a covering called the pelta which encases the anterior end. Ectosymbiotic bacteria line the cell's outer covering.

Oxymonad nutrition is commensal within their insect host. The non-motile cells are attached to the intestines of their wood-eating insect hosts by way of a terminal nodule at one end.

The cell's cytoskeleton is composed of two pairs of basal bodies separated by a preaxostyle. These basal bodies give rise to the flagella and to an organelle called the axostyle, which in some species may be able to undulate.

Mitochondria and Golgi apparatus are absent in these cells, which has contributed to their primitive placement in eukaryotic taxonomy.

Reproduction is poorly understood, but involves a sexual cycle.

Oxymonads are symbionts within the intestines of termite and other wood-eating insect hosts, and in turn host symbiotic bacteria. While both of these commensalistic relationships are recognized, their exact nature remains unknown. It is generally accepted that oxymonads (and the bacteria on their cell coverings) play a role in the breakdown of wood consumed by the insect host.

White, Toby. Oxymonadida. Palaeos: The Trace of Life On Earth.