A Microbial Biorealm page on the genus Paracoccus denitrificans 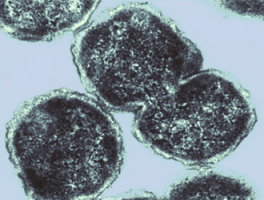 Image taken by Richard Evans-Gowing at the University of East Anglia, Norwich, UK.

The genome of Paracoccus denitrificans consists of two circular chromosomes and one plasmid. The first chromosome has 2,852,282 base pairs. The second chromosome has 1,730,097 base pairs and the plasmid has 653,815 base pairs. The plasmid encodes 611 known proteins such as Formyltetrahydrofolate deformylase and TonB-dependent siderophore receptor precursor. These proteins are not essential for the survival of the bacterium; however, the proteins transcribed and translated from the plasmid allow the bacterium to perform many of its metabolic functions. It is what gives Paracoccus denitrificans its unique features, such as the ability to metabolize ammonium to nitrogen gas.

The cell structures of Paracoccus denitrificans is similar to those in an eukaryotic mitochondria. It is a gram-negative bacteria and therefore has all the properties typical of a gram-negative bacteria. This includes a double membrane with a cell wall. During the exponential growth phase, it is mainly rod-shaped; however, nearly spherical cells are observed when in the stationary phase. They are able to obtain energy from both organic, such as methanol and methylamine, and inorganic compounds, such as hydrogen and sulfur. A feature of this bacteria is its ability to single-handedly convert nitrate to dinitrogen in a process called denitrification.

Paracoccus denitrificans live primarily in the soil. They produce nitric oxide and nitrous oxide, which gives rise to atmospheric damage. They are also responsible for the loss of nitrogen fertilizer in agricultural soil. They do so by single-handedly converting nitrate into nitrogen gas.

There are no known pathological effects of this bacterium on humans.

A research study conducted in 2007 looked at the complex formed between cytochrome c and cytochrome c oxidase. The lab used multi-frequency pulse electron paramagnetic resonance spectroscopy to study the complex. It was concluded that there was no set orientation or distance between the two proteins that made up the complex. Another study, conducted in 2007, used Fourier transform infrared spectroscopy to study the effects of pH on the reduced-minus-oxidized FTIR spectra. This research study found two pH dependent processes. A third study on Paracoccus denitrificans, published in 2007, studied the mechanism that reduces NO to N2O. The study concluded that the protons used in these reactions are taken up from the periplasm and not due to a proton electrochemical gradient.