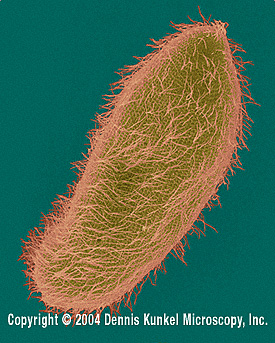 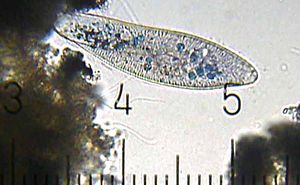 Paramecium are members of the phylum Ciliophora. They share many common characteristics with the rest of their phylum, but are also unique. For example, their shape is quite different from that of many other Ciliophora. They are also famous for their predator-prey relationship with Didinium. Paramecium are known for their avoidance behavior. If an encounters a negative stimiulus, it is capable of rotating up to 360 degrees to find an escape route.

Paramecium are ciliated unicellular organisms. The cilia cover the entire body. Like other ciliates, they are multinucleated. Paramecium may eject trichocyts when they detect food, in order to better capture their prey. These trichocyts are filled with proteins. Trichocysts can also be deployed for self-defense.

Paramecium are capable of both sexual and asexual reproduction. Asexual reproduction is the most common, and this is accomplished by the organism dividing transversely. The macronucleus elongates and splits. Under ideal conditions, Paramecium can reproduce asexually two or three tiems a day. Normally, Paramecium only reproduce sexually under stressful conditions. This occurs via conjugation, a process of gamete agglutination and fusion. Two Paramecium join together, forming a conjugation bridge. Each Paramecium has a diploid (2n) micronucleus that undergoes meiosis creating four haploid (1n) micronuclei Three of the resulting nuceli disintegrate, the fourth undergoes mitosis. Daughter nuclei fuse and the cells separate. The old macronucleus disintegrates and a new one is formed. This process is usually followed by asexual reproduction. 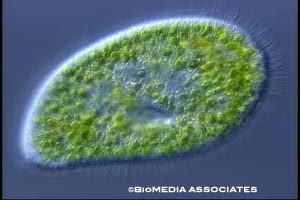 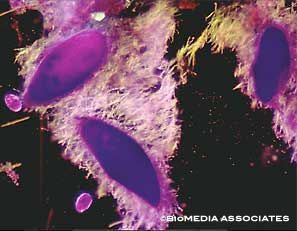