Difference between revisions of "Pelagibacterales (SAR11)" 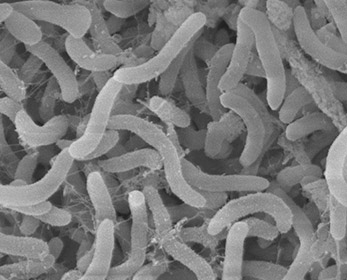 Pelagibacterales (SAR11) is an order in the Alphaproteobacteria composed of free-living planktonic oligotrophic facultative photochemotroph bacteria. (4)(5) They are most abundant group of planktonic cells in marine systems and possibly the most numerous bacterium in the world. Typically accounting for ~25% of prokaryotic cells in seawater worldwide, SAR11 bacteria play an important role in the global carbon cycle.(3) SAR11 bacteria oxidize organic compounds from primary production into CO2.

The order was originally named SAR11 following its discovery in the Sargasso Sea in 1990 by Professor Stephen Giovannoni and colleagues, from Oregon State University.(2)(5) It was first placed in the order of Rickettsiales, but after rRNA gene-based phyogenetic analysis, in 2013 it was raised to the rank of order, and then placed as sister order to the Rickettsiales in the subclass Rickettsidae. They are most closely related to the their sister order, the Rickettsiales. (5)

These gram negative, rod shaped bacteria are one of the smallest free cell living organisms (<0.7 um), with a cell volume less than 1/500th the volume of E.coli. They have a high surface to volume ratio to better absorb nutrients from its oligotrophic environment. These organisms are difficult to grow in pure culture due to their environmental adaptation to such low nutrients and slow growth. Unsurprisingly, it is also known to have one of the smallest genomes of free living cells.(7) The genome of the SAR11 clade has been generated by the DOE Joint Genome Institute. It was found that the isolates formed three micro clusters, closely related groupings within the clade. They were surprised to find that unlike marine SAR11 bacteria, the freshwater bacteria were much less genetically diverse, when measured based on the ratio of recombination to mutation in their genes.(9) It was also found that the bacteria have the complete biosynthetic pathway for all 20 amino acids and all but a few cofactors. There are also no pseudogenes, introns, transposons, or extrachromosomal elements yet observed for any cell. It is the most genetically efficient order of bacteria.

Currently the SAR11 clade is divided into five subgroups (8): 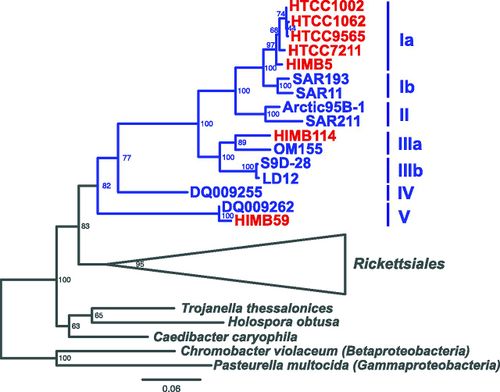 SAR11 clade possesses many unusual features for a free-living organism, including an extremely small, streamlined genome with few paralogs, no pseudogenes, and many missing genes and pathways that are otherwise common in bacteria(8). However, the SAR11 clade is phylogenetically diverse, spanning 18% 16S rRNA gene divergence. They have greater genomic rearrangement at operon boundaries than within operons, as well as hyper variable regions, possibly allowing these organisms to acquire new genetic material with adaptive significance (8).