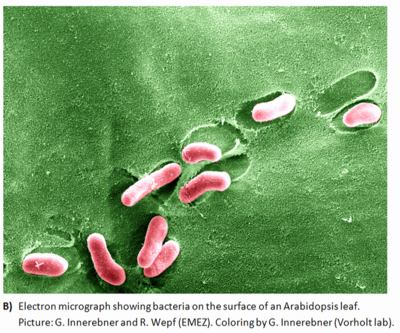 The need for control of pathogens during the manufacture of food is reflected by the incidence of foodborne bacterial infections. The number of cases of Listeriosis, for example, has been stabilized or is on the rise in many countries, especially in Europe, after having undergone a steep decline in the first part of the last 20 years. Similar trends can be observed for other foodborne infections, and new orally transmitted bacterial diseases are emerging (1). Studies have also shown evidence that antibiotic resistance traits have entered the microflora of farm animals and the food produced (5).

Phage therapy is the application of bacteriophages to bacterial infections of humans or animals with the goal of reducing bacterial load (2). Bacteriophages are a bacterial parasite, ubiquitous in environment, and can infect over 140 bacterial species (4). They are host specific and can only infect and replicate within specific bacteria. This allows them to target pathogens commonly found in food without reducing the number of commensal bacteria. Phage mediated biocontrol of food borne bacteria is not only an effective means treating pathogenic infections, it is also a solution to the fast-emerging antibiotic resistant bacterial strains.

Phages are widely distributed in the environment and represent part of the natural microbiological flora of foods [9]. A study used to identify Salmonella-specific phages isolated a total of 232 phages from 26 sampling sites which included broiler farms, poultry abattoirs, and wastewater plants (3). Bacteriophages which target Escherichia. coli are commonly present in sewage, hospital waste water, polluted rivers and fecal samples (7). E. coli phages have been recovered from fresh chicken, pork, ground beef, mushrooms, lettuce and other raw vegetables (1). Listeria monocytogenes, the bacteria which causes listeriosis is also found on various retail foods and is ubiquitous in the environment (6). 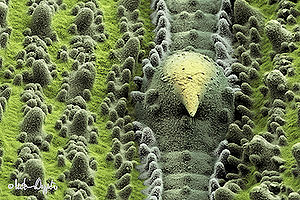 Most food treated is solid and therefore the treatment of phages cannot diffuse to bacterial sites, unlike in a liquid medium. Simply based on kinetics, thermal motion-driven particle diffusion and mixing due to fluid flow or bacterial swimming will result in a higher rate of phage and bacterium encounters (1). When treating solid food, a sufficiently high number of phages is required to infect low numbers of bacteria due to the unlikelihood that they will come into contact. This was made evident by a study which showed the mean % of surviving Salmonella cells in a nutrient broth decreased significantly with an increase in phage concentration. After 120 minutes, 90.3 % of cells remained when 1.8x10^4 PFU/mL of phage was added, compared to the 1.9% of cells that survived when 1.1x10^7 PFU/mL of phage was added [10]. On a solid matrix, the concentration of the bacterial host is not important once the concentration threshold of phage numbers enable it to cover the entire space (1). Another point to consider is the doubling time of the specific bacteria at a particular environment. However, if the number of target bacteria falls below a minimum number, the large number of phage required may render phage therapy impractical (3).

L. monocytogenes is an opportunistic food borne pathogen that affects the young, the old, immunocompromised and the pregnant women population (1). It causes a serious disease called Listeriosis, with ill-effects ranging from gastroenteritis to septicemia [11]. It is a unique and important food-associated pathogen because it can tolerate high levels of salt content, can grow at acidic pH values and can still replicate at temperatures below 1 degrees celsius [9]. L. monocytogenes is usually killed during pasteurization or other heat treatments (1), however it has been isolated from ready-to-eat foods such as milk, cheese, cold-cut meats, smoked fish, seafood and vegetables [9]. No clear reservoir has been identified, but contaminations can occur via ingredients, factory workers and equipment (1).