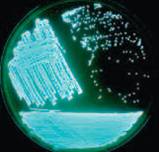 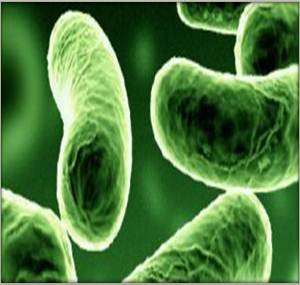 Like many other Photobacteria P. leiognathi genetic material is found in two circular chromosomes. The 16S RNA Currently the highest level of assembly is scaffold only, 4,598,918 total bases with nucleotide sequence of 7.3 kbp. [11, 12, 7, 3]. A key component of its genome is the lux-rib operon which includes the following genes: luxR (repressor), luxI (inducer), luxA, luxB (luciferase), luxC, luxD luxE (aldehyde), and luxG (not known) which are responsible for the bioluminescence properties of the bacteria. It is worth noting that P. leiognathi lacks the luxF gene whose functions and role are not clearly identified yet. [10] Due to the recent applications of the16S rRNA many species, including this one have occasionally been shifted in and out of the genus, from genus Photobacterium to genus Vibrio. Some genomic polymorphism has been seen within the species depending on the type of host they form a symbiotic relationship with. Currently 11 subspecies of P. leiognathi are known. [1, 3, 4, 7, 9, 10, 19]

P. leiognathi is a gram negative bacterium with coccobacillus shaped cells. The cells can be straight or plump rods. The rods have a diameter of about ~0.8 -1.6 µm and a length of ~1.8-2.4 µm. P. leiognathi can contains 1-3 polar flagella, but some cells found in symbiotic relationship with fish have shown to be non-motile. The individual cells contain no pigmentation and appear white or colorless [1, 7, 11, 17]. Interestingly when the bacterium forms colonies they exhibit luminescent properties, can emit bluish-green light (~490nm). Luminescence is only exhibited when the bacteria is found in colonies because a high concentration of an autoinducer released by the bacteria is necessary to activate the lux gene. It is believed that P. leiognathi, like many other Photobacteria, utilizes the quorum sensing mechanism to detect the right concentration of the auto-inducing enzymes and trigger luciferase production. Luciferase is then responsible for controlling the oxidation reaction of luciferin in which riboflavin mononucleotide (FMNH2) and a long chain aldehydeare reduced [8, 18, 20]. The reaction produces luminescence, a continuous glow.

P. leiognathi is a marine, organism, therefore it requires sodium for growth. P. leiognathi is a chemoorganotrophic microorganism that obtains its energy from the oxidation of organic compounds like glucose, mannose, fructose, or glycerol. P. leiognathi is a facultative anaerobe which means it can perform both fermentation in the absence of oxygen and respiratory metabolic functions in the presence of oxygen. Like many other Photobacteria, P. leiognathi prefers an environment with oxygen, because oxygen plays a key role in the production of luminescence [11, 17]