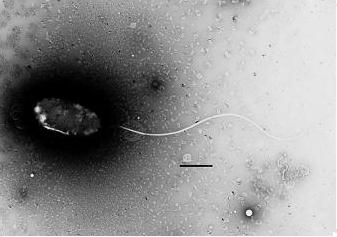 Members of the genus Photobacterium are bacteria in marine surroundings. Photobacterium profundum is a newly discovered species that was isolated from sediment of the Ryukya trench off of Japan. It is barophillic and can survive under high pressures. It is a Gram-negative rod that can potentially grow at temperature between 4oC and 18oC (optimal at 10oC) under atmospheric pressure, and at pressures between 0.1MPa and 70MPa (optimal at 10MPa) at 10oC. [1] 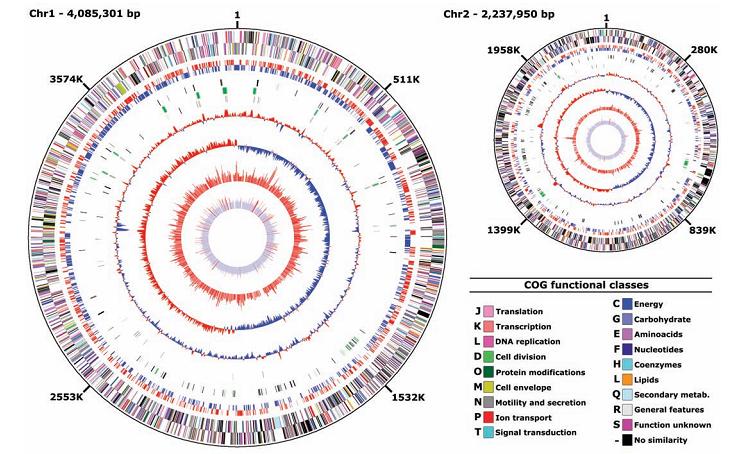 The genome of Photobacterium profundum is consisted of a 4.1-Mbp major circular chromosome, a 2.2-Mbp minor circular chromosome, and a 80-kbp circular plasmid. SS9 has 14 ribosomal RNA (rRNA) operons on chromosome 1, and 1 on chromosome 2; it has the maximal number of rRNA so far identified in a bacterial genome. This may implies its characteristic as an extremophile that responds to extreme growth conditions differently than the majority of the terrestrial mesophile organisms. Various operons could have evolved to operate under particular physiological conditions. [2]

Strain DSJ4 is an anaerobic chemoorganotroph, with two types of metabolism – respiratory and fermentative types. Its microbial ability to use respiratory metabolism is proven with its positive result in catalase and cytochrome oxidase test. It uses nitrate as an proton acceptor which will be reduced to nitrite. This organism does not produce H2S as the fermentation product. Photobacterium profundum utilizes glycogen, Tween 40, Tween 80, D-galactose, D-glucose, maltose, D-mannitol, D-mannose, D-trehalose and glycerol as the sole carbon and energy sources. The presence of NaCl in the medium, the temperature between 4oC and 18oC, and the pressures between 0.1MPa and 70MPa are essential for strain DSJ4 to grow. [3] The fatty acid in DSJ4 is primarily consisted of hexadecenoic acid, and significant amounts of 14-methylpentadecanoic acid, octadecenoic acid, and icosapentaenoic acid. [1]

Several stress-response genes are activated at atmospheric pressure for SS9. Four genes, naming the htpG, dnaK, dnaJ, and groEL, up-regulated at 0.1MPa are involved in protein folding and in response to stress conditions. There is transcriptional induction of the glycolytic pathway and trehalose phosphotransferase system to be up-regulated under stress conditions.

The phylogenetic analyses of the 16S rRNA gene sequence reveals that Photobacterium profundum is closely related to Hyphomicrobium indicum. gyrB, a DNA gyrase gene, is also employed as another phylogenetic marker to provide more reliable information of the evolutionary position of Photoprofundum and H. indicum. In comparison, Photobacterium profundum has a unique signature nucleotide sequence (5’-TTCATTACGAGCGG-3’) at positions 345-359, according to the E. coli numbering system. [5] These closely related organism is differentiated by their various phenotypic characteristics, namely the optimum growth environment, morphology, catalase, oxidase, metabolic pathways, sucrose utilization and H2S production.

The sequencing of Photobacterium profundum is possible and completed by the use of molecular methodologies. Molecular methodologies, the technique of extracting DNA from a sample, amplifying the interested gene using the polymerase chain reaction (PCR), and cloning and sequencing the resulting product, can help better understand the physiological and evolutionary diversity within the marine microbial community. Genome sequence of this unicellular marine organism provides example of how species with similar marine habitats can have evolved different gene complements that allow them to coexist with non-competitive, complementary functions. [4] This simple organism also provides a potential to discover hidden genetic and physiological complexity that might be applicable to future biotechnology.

Researchers at Scripps Institution of Oceanography at the University of California, San Diego has stated in their genomic research that these deep sea life forms, including Photobacterium profundum, “may help lay the groundwork for a variety of research outside of the deep ocean, including the application of deep sea bacterial genes for improving human nutrition and degrading pollutants, and calculating possibility for life in pressurized environments elsewhere in the solar system.” [6]