Phytophtora infestans is an oomycete protist. P. infestans was originally thought to be a fungal species due to its filamentous structure and metabolic strategies, but recent biochemical and phylogenetic analyses has revealed that P. infestans is only remotely related to fungi and is more closely related to heterokont algae (12, 16). P. infestans growth structure is fungal-like, with the mycelium usually coenocytic and consisting of hyphae 5 to 8 µm in diameter (6). P. insfestans cell walls are primarily composed of cellulose and β-glucans and lack chitin (3). P. infestans is the causal agent of late blight in potatoes, lead to the Great Irish Famine in the mid nineteenth century, and causes approximately US $3 billion dollars worth damage annually world-wide (4). P. infestans is distributed worldwide, including major potato growing regions in Europe, North America, and South America (6).

In 2009 the Phytophthora infestans genome was sequenced (7). The genome size is estimated to be 237 Mb consisting of a high G-C content, about 52% (15, 13). Microscopic analysis showed that there are 8-10 chromosomes (13). It is a diploid organism, meaning there are two sets of the chromosomes present within each cell (2). 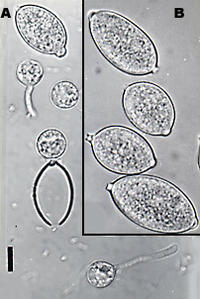 Figure 2. Phytophthora infestans. A, zoospores produced within the lemon-shaped sporangia (B). Source: [2]

Life Cycle
Phytophthora have two kinds of resting or survival spores that they produce, both of which have thick cell walls that allow them to survive in suboptimal environments for long time periods. The two kinds of spores are oospores, formed from sexual recombination and chlamydospores, asexual survival spores(8).

Under cool wet conditions, Phytophthora oospores or chlamydospores which will germinate to form hyphae or directly produce sporangia. The sporangia are able to detach and travel in the air(6). The sporangia then release free swimming zoospores that have two flagella, one tinsel and one flagellate. The flagella allow the zoospore to travel in water on the surface of leaves as well as in the soil (6). Once a zoospore reaches the plants root or leaf surface it forms a cyst. The encysted zoospore then germinates and forms hyphae on the host surface. The tube like hyphae invades the plant leaf or root and allows the cell to get food (8). After the Phytophthora infects the plant, it can produce sporangia and zoospores to further infect other tissues of the same plant or nearby plants. The Phytophthora will then produce more survival structures, oospores or chlamydospores, to overwinter and provide a source of inoculum for the following year’s life cycle(9).
Metabolism
Once the plant host has been infected the hyphae are used to take up nutrients. Nutrients required for growth are organic carbon source, oxygen, phosphorus, nitrogen, hydrogen, sulfur, calcium, magnesium, and iron(10).
Cell Structure:
The cell wall is composed mostly of (1-3) β-D-glucans, (1-6) β-D-glucans, and cellulous(3).

As previously discussed, P. infestans is an economically significant plant pathogen and is most infamous because of the Great Irish Famine of the mid nineteenth century. The pathogen may be found in foliar regions of host plants and in soil. P. infestans inoculum survival and pathogenicity in soils may be attributed to a number of factors including soil texture, moisture content, and pH. P. infestans sporangia survival and pathogenicity is maximized in soils with increasing amounts of clay or loam, high amounts of moisture (20% moisture capacity), and generally decreases as soils become more acidic (ph of 3.8-4.2). (11, 1).

According to Erwin and Ribeiro (6), late blight epidemics caused by P. infestans are preceded by the following environmental coniditions: “1) night temperatures below the dew point for at least 4 hours; 2) low night temperature that does not drop below 10C; 3) the mean period of cloudiness not less than 0.8 of a day; and 4) rainfall of at least 0.1 mm on the following day.”

1)Andrivon, D. (1994), “Dynamics of the survival and infectivity to potato tubers of sporangia of Phytophthora infestans in three different soils.” Soil Biology Biochemistry, 26, 945-952.