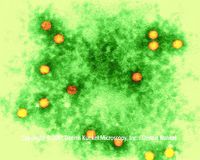 The name "picornavirus" means " little RNA virus" (pico means "very small" in Greek; pico + RNA virus). Picornaviruses are among the oldest viruses, dating back to 1400 B.C., when a temple record tells of poliovirus infections in ancient Egypt. Picornaviruses are also among the most diverse viruses, with over 200 serotypes causing infections such as Polio, Hepatitis A, and the common cold. Foot-and-Mouth Disease Virus (genus: Apthovirus), which causes infections in livestock, was one of the first viruses to be recognized; it was discovered by Loeffler and Frosch in 1898.

The picornavirus genome consists of a single molecule of linear, postitive(+)-sense, single-strand RNA. It is non-segmented. The complete genome is 7000-8500 nucleotides long. At the 5'-terminus of the genome has a long untranslated region 600-1200 bases in length, which is important in translation, virulence, and possibly encapsidation. There is a shorter untranslated region (50-100 bases in length) on the 3'-terminus, which is important in (-)strand-synthesis. The 5'-terminus untranslated region also has a "clover leaf" secondary structure known as the Internal Ribosome Entry Site (IRES), which distinguishes picornaviruses from other RNA viruses; this structure is important in translation and replication. The 5'-terminus is modified by a covalently-attached VPg protein (which takes the place of a cap), while the 3'-terminus is modified by polyadenylation.

Picornavirus virions consist of a non-enveloped, icosahedrally symmetric capsid. The capsid consists of 12 capsomers and has a diameter of 27-30nm, which makes it one of the smallest of all viruses (thus the name "picornavirus"). The genome is tightly packed into the capsid. The capsid has four unique proteins: VP1, 2, 3, and 4.

Using different cellular receptors (depending on the picornavirus), a picornavirus virion attaches to a host cell. Uncoating occurs, and the virus' RNA is released into the cytoplasm of the host cell through a membrane channel. Virus replication occurs entirely in the cytoplasm. The host cell's transcription processes are shut off to a degree that varies with different picornaviruses, while the IRES helps to make sure the virus' transcription is left untouched. Replication occurs. RNA is packaged into preformed capsids. Release of the virus occurs when cell lysis occurs (with the exception of Hepatits A, which is non-lytic and thus creates a more persistent infection).

A more detailed description of virus reproduction can be found at Microbiology @ Leicester: Virology: Picornaviruses.