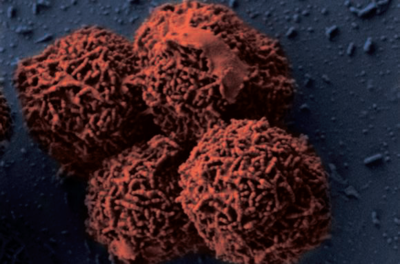 Planococcus halocryophilus is an aerobic, gram-positive bacterium that is found in arctic permafrost. This extremophile is characterized as both halophilic and psychrophilic, thriving in an environment of high salinity as well as an extremely low temperature. This bacterium's reproduction capability is measured at the lowest recorded temperature, measured at -15ºC. Planococcus halocryophilus continues to preserve itself at temperatures as low as -25ºC. The bacterium is accountable for effects of global warming, bringing about sizable CO2 emissions concurrent to melting permafrost. Astrobiological research towards this extremophile is resonant owing to its similitude of potential target environments for life on Mars.
Bacterium Planococcus Halocryophilus Offers Clues about Microbial Life on Enceladus, Mars. www.sci-news.com/space/article01105-planococcus-halocryophilus-bacterium.html.

Planococcus halocryophilus (OR1) cells are non-spore forming motile cocci that occur individually or in pairs, with a diameter of 0.8-1.2 micrometers. In colonies, P. halocryophilus appears an opaque, shiny orange color in clusters measured between 2.0-3.0 mm. As stated before, they are gram-positive, aerobic, and both psychrotolerant as well as halotolerant. They can grow at temperatures between -15 and 37ºC, however their optimal temperature of growth is approximately 25ºC. 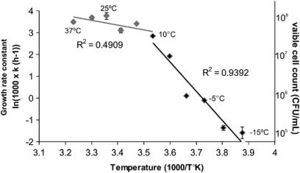 Figure 1 exhibits an Arrhenius plot of log transformed growth rate constants for OR1. Individual measurements come from viable cell count in relation to temperature. Here, the optimal temperature of growth is projected at 25ºC with a maximum 10^8 colony forming units per mL, and a significant drop in growth rate when temperature falls below 10ºC. At <10ºC, the R2 value (slope) increases from approximately 0.49 to approximately 0.94. Growth rate seems to negate below -10ºC.

P. halocryophilus are capable of growth in liquid water of high salinity, up to 19% NaCl, but maintain the ability to grow in conditions of 0% NaCl. When compared to other strains of Planococcus, P. halocryophilus was the only species with a growth temperature range below zero. OR1 also measured out to be the most tolerant to NaCl (ahead of P. maritimus at 17% NaCl). A major physiological feature that distinguishes P. halocryophilus is its transformation of the cellular envelope at temperatures below zero. OR1 cells grown at subzero temperature gain winding nodular sheet encrustations around each individual cell. Its hypothesized that the purpose of this cellular envelope addition is to provide extra protection to the interior of the cell during low-temperature replication.

Figure 2 shows three electron microscopic images of P. halocryophilus, (a) and (b) under scanning EM and (c) under transmission EM. Images (a) and (c) show comparison of cell division planes, for cells replicating at 25ºC (a), versus dividing cells at -15ºC (c). The images show dramatic contrast by the nodular cell envelope, showing a 3-dimensional representation of the encrustation in image (c).

In conditions of cold-specific stress, energy metabolism carries on through increased abundance of substrate shuttling genes and components of the electron transport chain. In subzero conditions (-15ºC), while most metabolic enzymes are repressed, the tricarboxylic cycle and ATP synthase keep the cell alive. In conditions of salt-specific stress, carbohydrate metabolism is extricated by glycogen synthesis, stores induced by specific genes that are activated only under nutrient limited conditions. P. halocryophilus proves its unique resourcefulness from specific response methods through fastidious induction and regulation of metabolic activity. 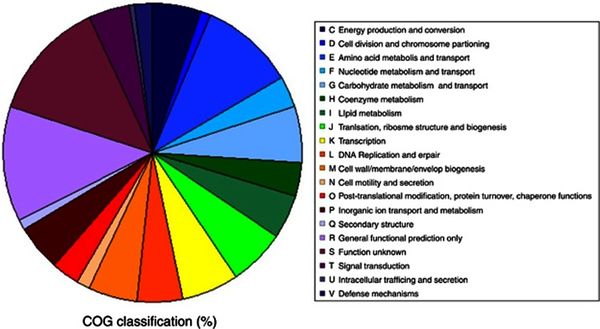 Figure 3 presents a pie chart for the distribution of genes in correspondence to specific functions. The orthologous groups presented that are related to cellular metabolism show a balanced distribution of about 5% of the total genome. The discernable exception comes from amino acid transport and metabolism, a functional category which makes up roughly 10% of the total genome, the largest orthologous group cluster accounted for with known function. The ratios from Figure 3 present closely comparable results to the genomic classifications of other cryophiles such as P. ingrahamii, E. sibiricum, and P. arcticus.

The phylogenetic position of P. halocryophilus was determined by a 16S rRNA gene sequence (amounting to 1550 base pairs) amplified by PCR. This determined that OR1 would be designated with the genus Planococcus and affiliated with the Planomicrobium clade. The P. halocryophilus strain’s location was identified by homologous signature nucleotides to the Planococcus genus, however the strain showed slight varying of clustering patterns compared to that of the Planomicrobium clade. The 16S rRNA genome sequence showed greatest relation to P. dorghaensis (99.6%) and P. antarcticus (98.8%) out of all the Planococcus species, and the greatest separation from P. columbae (96.4%). In order for two organisms to be defined as part of the same species, the threshold of comparison is designated as greater than or equal to 70% similarity by DNA-DNA comparison. Upon comparing DNA sequences of P. halocryophilus to that of P. dorghaensis, the similarity was measured at 46%, and for P. antarcticus at 18.2% similarity. These DNA similarity measurements provided concrete evidence that OR1 was an independent species from other Planococcus strains. Figure 4 shows a phylogenetic tree related to 16S RNA gene sequences among related taxa of Planococcus and Planomicrobium.

In order to maintain critical functions within transcription, translation, and regulation, P. halocryophilus contains specific cold-adapted proteins, observed in many cryophiles and mesophiles, that are able to provide essential functions under both cold and osmotic stress. In DNA/RNA replication, specialized helicases and recombination factors are dependable to drive replication in subzero conditions. Other specialized transcription and translation factor proteins have been observed to maintain functions at low temperature or in osmotic stress, including for transcription termination, translation initiation, elongation, and termination. As an alternative under extreme osmotic and subzero stress conditions, specialized sigma factors can be appointed to maintain signal transduction.

Planococcus halocryophilus is found in active surface layers of the Canadian high arctic permafrost (Eureka, Ellesmere Island), existing in brine veins between ice crystals, which reach subzero temperatures. These veins provide liquid water below freezing point on account of the high saline content that keeps the water from freezing. Liquid water channels act as critical accommodations for P. halocryophilus on account of their motile conduits for nutrients to reach the bacterial colonies.

Figure 5 highlights the microscale habitat of P. halocryophilus through (a), an enhanced photo of bordering ice crystals, focused on the brine vein spaces in between. In (b), the photo is enlarged to reveal a brine pocket within the vein, a likely candidate for major microbiological activity, where (c) shows the same brine pocket but under epifluorescence to provide evidence of the inhabiting cryophilic bacteria.

P. halocryophilus only accounts for a small fraction of the flourishing microbiota in arctic environments, and contributes to the large-scale emission of stored carbon dioxide that occurs alongside the melting of the permafrost. This disruption of the global carbon cycle has been shown to accelerate melting effects of global warming.

Astrobiology involves the study of life on Earth in order to predict the conditions of extraterrestrial life, ultimately to explore origins of life in the universe. The most important foundational question of astrobiology is what factors constitute habitat suitability, in other words, what must an environment require to be habitable. The most basic way to answer this question is to identify a presence of life; this provides a proxy for what makes that specific environment able to sustain life. In order to actually measure habitat suitability (to what degree is the environment suitable to life), three basic constituents must be taken into account. First, the environment in question; the physical, chemical and biological facets that make that environment unique. Second, the life form in question; how can the organism be classified and what components are distinctive of its ability to survive. Third, the relationship between the life and the environment that allow for the organism to grow, reproduce, and interact with that environment.

P. halocryophilus plays a key role in Astrobiological research on account of its comparable habitat to that on Mars. Pockets of shallow ice have been discovered on the surface of Mars, and the permafrost habitats on Earth are used as comparable exemplary environments. The idea is that patterns of life in Earths harshest environments (of those that can be compared to environments on other planets and moons) are the best way to determine what traits life would need to survive in those environments, and accordingly, what degree of evolution would it take for similar life to possibly inhabit these extraterrestrial environments in question. From the brine veins that would exist between ice crystals on Mars’ surface, the most likely lifeforms to exist would need to contain many analogous traits to that of a cryophile such as P. halocryophilus. OR1 acts as the best test subject for the study of cryoenvironments because it is capable of growth at the lowest recorded temperatures, and is therefore the most extreme example of a cryophile.