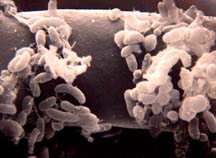 The rhizosphere is a narrow region of soil that is directly influenced by root secretions and associated microbial activity [7]. Plant growth-promoting bacteria (PGPB) occupy the rhizosphere of many plant species and have beneficial effects on the host plant. They may influence the plant in a direct or indirect manner. A direct mechanism would be to increase plant growth by supplying the plant with nutrients and hormones; Indirect mechanisms on the otherhand, include, reduced susceptibility to diseases, and activating a form of defense referred to as induced systematic resistance (ISR) [5]. Examples of bacteria which have been found to enhance plant growth, include Pseudomonas, Enterobacter, and Arthrobacter [6]. 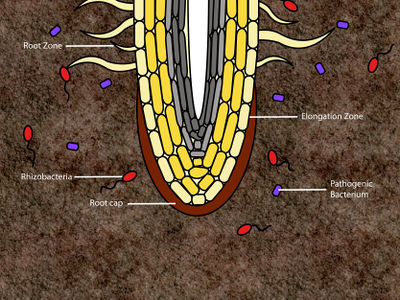 Longitudinal cross section of a root and the surrounding rhizosphere.

Rhizobacteria have the ability to enhance plant growth in the absence of potentially pathogenic microorganisms. One way in which they can enhance plant growth is by solubilizing normally poorly soluble nutrients with either bacteria siderophores or lowering the pH by secreting acidic organic compounds [3]. Phosphorous is a major macronutrient needed for plants, but is not easily up taken due to it’s reactive nature with iron, aluminum, and calcium; these common reactions result in the precipitation of phosphorous, thus making it unavailable to plants [5]. Some PGPR can convert phosphorous into a more plant attainable form, such as to orthophosphate [6]. Iron is also another essential nutrient, but it is scarce in soil. PGPB, can produce compounds called siderophores, which acquire ferric iron (Fe3+), root cells can then take this up by active transport mechanisms [6]. 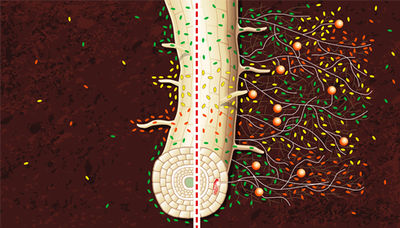 Plant growth promotion can also be regulated by the production of hormones and other compounds related to plant development. Auxin is a class of plant hormones important in the promotion of lateral root formation. Increased lateral root formation leads to an enhanced ability to take up nutrients for the plant [3]. Other classes of plant hormones includes Gibberellins and Cytokinins, which both stimulate shoot development, however their effects on root growth are less well researched [3].

Ethylene in low levels has been observed to promote growth, but at moderate to high levels it may inhibit root elongation. In plants, 1-aminocyclopropane-1-carboxylate (ACC) and 5’-deoxy-5’methylthioadenosine (MTA) is converted to ACC by ACC synthase [9]. A number of plant growth-promoting bacteria have been found to contain the enzyme ACC deaminase, which cleaves and sequesters the plant ethylene precursor ACC and thus lowers the level of ethylene in a developing or stressed plant [1]. The presence of plant growth-promoting bacteria thereby moderates concentration of ACC so that it does not reach a level where it begins to impair root growth.

Nitrogen availability has become one of the yield-limiting factors in plant growth due to rainfall and mineral leaching into ground water [8]. There are a number of PGPB, which are able to fix atmosphere nitrogen (N2) and make it more accessible to plants. Although PGPB have the ability to fix nitrogen, they are not able to provide a sufficient amount to sustain the plants. Due to their effect on shoot elongation and stimulation of nitrate (NO3-) transport systems, they are able to greatly increase the intake of nitrogen by the plants, despite not fixing enough nitrogen on its own for sustanence [8].

PGPB are able to control the number of pathogenic bacteria through microbial antagonism, which is achieved by competing with the pathogens for nutrients, producing antibiotics, and the production of anti-fungal metabolites [7]. Besides antagonism, certain bacteria-plant interactions can induce mechanisms in which the plant can better defend itself against pathogenic bacteria, fungi and viruses [2]. This is known as induced systemic resistance (ISR) and was first discovered in 1991 by Van Peer et al [3]. The inducing rhizobacteria triggers a reaction in the roots that creates a signal that spreads throughout the plant which results in the activation of defense mechanisms, such as, reinforcement of plant cell wall, production of anti-microbial phytoalexins, and the synthesis of pathogen related proteins [3]. Components of bacteria that can activate ISR includes lipopolysaccharides (LPS), flagella, salicylic acid, and sideophores [2].

Agriculturally, the beneficial bacteria can be used as inoculants for crops and plants [4]. They are given the term biofertilizer, which is a substance that contains living microorganisms and when they are applied to seeds, plant surfaces, or soil, it promotes growth by increasing the supply or availability of primary nutrients to the host plant [4]. Biofertilizer is different from organic fertilizers, which contains organic compounds that increase soil fertility either directly or as a result of their decay. Not all plant-growth promoting bacteria are considered a biofertilizer; if they control plant growth by control of deleterious organisms, they are instead regarded as biopesticides. Biofertilizers must contain living microoganisms that promote plant growth by improving the nutrient status of the plant.

PGPB has become increasingly important in the agricultural production of certain crops. However the commercialization and utilization of PGPB has been currently limited due to the fact that there have not been consistent responses in different host cultivars and at different field sites [4]. Additionally, their effects have been used in environmental application, such as promoting re-vegetation in eroded deserts [10]. Although the use of plant growth-promoting bacteria in agriculture and solving environmental problems seems promising, there is not enough knowledge about these bacteria for them to be put into use. A lot more research needs to be done before they can be proven useful to mankind.