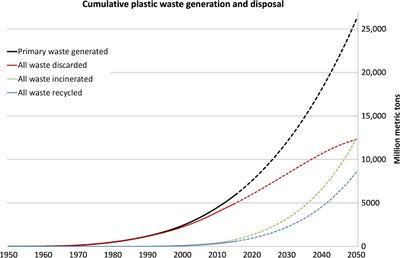 Ideonella sakeasis was first discovered in 2016 by Japanese researchers who isolated the novel species from outside a bottle-recycling plant.Cite error: Closing </ref> missing for <ref> tag At the time, it was the first and only known bacteria species that had naturally evolved to be capable of breaking down and digesting plastic as a carbon and energy source.[12] Earlier work had shown that the mesophilic fungus Fusarium oxysporum could also produce an enzyme that is able to break down PET into its constituent monomers.[13] The discovery of I. Sakeasis was more exciting, however, as bacteria are much easier to harness for industrial uses compared with fungi and other eukaryotes.[14] Furthermore, it was shown that the enzyme involved in hydrolyzing PET in I. Sakeasis had as much as 88 times more activity compared to the enzyme found in F. oxysporum.[8] A hydrolase enzyme isolated from the actinomycete Thermobifida fusca was also shown to effectively depolymerize PET.(14) But T. Fusca bacteria do not use this enzyme to catabolize PET and the activity of this enzyme is about 120 times lower.[8]


I. sakeasis stain Gram-negative and are aerobic bacteria belonging to the phylum Proteobacteria. (10) The cells are non-spore forming and rod-shaped. (10) The genus Ideonella belongs to the family Comamonadaceae of the class Betaproteobacteria. (10) I. Sakeasis was identified as a representative of a novel species in the genus Ideonella on the basis of its physiological, biochemical and phylogenetic data, including DNA–DNA relatedness. (10) The DNA–DNA relatedness of I. sakeasis with its closest phylogenetic neighbours was well below the 70 % cut-off point recommended for the assignment of the strains to the same genomic species. (10) The bacteria grows within the pH range 5.5–9.0 (optimally between pH 7–7.5) and temperature range 15–42 ºC (optimally between 30–37 ºC) and cannot grow with 3% NaCl. (10) The cells of the species are motile and use a polar flagellum to move. (10) They attach to PET films using appendages which can also grow longer to connect the cells to each other. (8) Appendages connecting the cell to PET films might assist in the delivery of secreted enzymes into the film. (8) I. Sakeasis can degrade and assimilate PET as a sole carbon source. (8)(12)


The researchers who discovered I. sakeasis identified two enzymes produced by the bacteria involved in PET degradation - PETase and MHETase (MHET stands for mono(2-hydroxyethyl) terephthalic acid, the monoester of tetraphtalic acid and ethylene glycol) - which catabolized PET into its monomers tetraphthalic acid and ethylene glycol. (8) These monomers are then used for bacterial metabolism.(17)(8) Although the PETase enzyme has been described in other bacterial species (mostly belonging to the phylum Actinobacteria), MHETase seems to be unique to the genome of I. sakeasis. (17) Originally, the degradation of PET by I. sakeasis was relatively slow; complete degradation of a small PET film took 6 weeks. (8)(12) Recently, researchers were able to genetically modify I. sakeasis to break down PET faster and also degrade PEF( polyethylene-2,5-furandicarboxylate) which is an emerging bioderived PET replacement with improved properties. (9)(15) The newly modified PETase enzyme is active on the aromatic polyesters (PET and PEF), but not aliphatic polyesters. (15) The researchers who engineered this new enzyme concluded that it is likely that significant potential remains for improving its activity further. (15)

PET was only patented roughly 80 years ago and put into widespread use in the 1970s. (15) It is likely that the enzyme system for PET degradation and catabolism in I. sakaiensis appeared only recently, demonstrating the remarkable speed at which microbes adapt and evolve to exploit new substrates. (15) In this case, the new substrate was waste from an industrial PET recycling facility. (15) It is thought that a limited number of mutations in a hydrolase, such as PET hydrolytic cutinase, that inherently targets the natural aliphatic polymer cutin (waxy polymer that is one of two main components of the plant cuticle) may have resulted in enhanced selectivity for PET and led to the evolution of the PET degradation pathway in I. sakeasis. Genomic analysis has shown that a genomic basis to support the metabolism of MHET analogs was established much earlier than when ancestral PETase proteins were incorporated into the pathway. PET enrichment in the habitat of I. sakeasis is thought to have potentially promoted the selection of a bacterium that might have obtained the necessary set of genes through lateral gene transfer. [8]