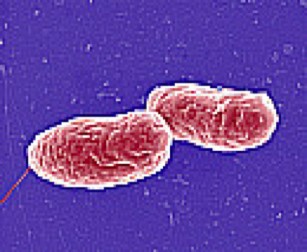 Plesiomonas shigelloides is a facultatively anaerobic chemo-organotrophic Gram-negative bacterium. Being that this organism is faculatively anaerobic means that it can use oxygen as a terminal electron acceptor when it is present, but also flawlessly switches to fermentation as a means of producing ATP when oxygen is absent. One study has shown that like many organisms, Plesiomonas shigelloides utilizes glucose as a source of carbon as well as energy source. However, what is somewhat odd, is that these particular organisms have a membrane bound mannose permease. It is unknown as to why this organism has the ability to take in mannose, but lacks the ability to use it constructively as a carbon or energy source. The lack of mannose isomerase (coverts mannose to its 2 epimer glucose) causes a build up of mannose 6-phosphate and subsequent death (Rager et al).

It is usually found in topical or subtropical areas, with a high amount in Japan, Thailand, and China. However, it still is found globally, including areas as diverse as Africa and the Polar Circle (Ciznar et al). While it thrives best in warm and wet climates, it can survive in a wide variety of habitats including water, soil, cold blooded animals, and warm blooded animals.

Little was found on specifics of the chromosome but we can assume it is circular. Some research as listed below helps to give an idea of this along with how the microbe compares to others.

In one study, using multilocus sequence typing (MLST) with five genes from unrelated strains from different countries and ecological sources, results showed that there was a great amount of nucleotide and genotypic diversity, with no salient internal phylogenetic structure. It was determined that “homologous recombination in housekeeping genes affects P. shigelloides alleles and nucleotides 7 and 77 times more frequently than mutation, respectively” (Salerno et al). P. shigelloides is unique in the Enterobacteriaceae family because of the higher recombination rate. The bacteria is usually identified by antibiotic sensitivity testing, serotyping, and bacteriological analysis.

Plesiomonas shigelloides is a short gram-negative rod. It is oxidase-positive and catalase-positive. The organism moves by polar flagella which are lophotrichous, meaning they have multiple flagella in the same area. Because of this, the bacteria generally move in one direction. (Adams and Moss)

It is a free living cell in aquatic environments (Levin). When living inside of cold blooded and warm blooded animals, symbiosis is sometimes expected, especially in fish intestinal tracts. 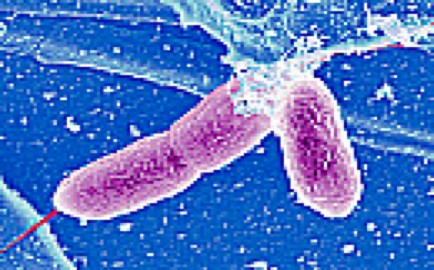 Plesiomonas shigelloides is an organism that is commonly found in fresh and brackish water (brackish water meaning water that has a noticeable amount of salinity but less than salt water or ocean water). This ubiquitous bacteria is commonly found living cold-blooded animals such as snakes, frogs, turtles and fish. It has also been found, less frequently, in cattle, poultry, pigs, sheep, cats and dogs. All of these host/inhabitant relationships are said to be a form of commensalism. This bacteria is said to thrive in warmer aquatic environments of temperatures of 35-38 degrees Celcius. The ways in which Plesiomonas shigelloides gains energy by the fermentation of sugars with little or no gas production. Most strains grow between a pH of 4 and 9, and few can survive below a pH of 4 (Levin). An interesting controversy surrounds this organism. This controversy is based around the assumption whether or not Plesiomonas shigelloides is harmful to human hosts. This controversy stems from inconclusive results regarding many outbreaks of gastroenteritis and diarrhea around the globe. It is debatable whether this bacteria is an opportunistic pathogen, meaning that it will not cause ailments upon entry of health humans (pathogenesis occurs only in immunosuppresed individuals), or simply a non-pathogenic symbiont. If this organism is pathogenic, then it most likely produces an enterotoxin, which passes into the intestinal tract causing diarrhea (one study says it produces a cholera-like enterotoxin)(Brenden et al). Symptoms normally last only 1~7 days in patients. Eating raw oysters seems to be the most common form of Plesiomonas shigelloides incorporation to one’s system.

A study with P. Shigelloides was researched in five pond systems in Bangladesh over a years time. Seasonal patterns were documented. The population peaked in May in the hydrophyte and water samples of the lakes. Another peak in the population was in November in the sediment and phytoplankton. It existed in all areas of the ponds year round. (Islam et al.) This helps demonstrate the diversity of environments of which this microorganism can survive.

It is also known to reside in the intestinal tracts or tissues of healthy fish, including pike and other fish from the Gulf Coast. Populations of the microbe change seasonally and usually are highest from April to October and lowest in the winter. It is believed that Plesiomonas shigelloides could be a normal occupant in the intestines of warm water fish. (Austin et al)