Difference between revisions of "Pleurocapsa"

A Microbial Biorealm page on the genus Pleurocapsa 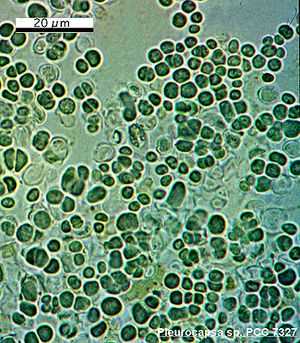 Pleurocapsa sp. From the Institute of Vegetal Biochemistry and Photosynthesis.

Pleurocapsa is a nitrogen-fixing, spore-forming cyanobacterium that can be found in many types of marine environments.

No Pleurocapsa genomes have been sequenced. 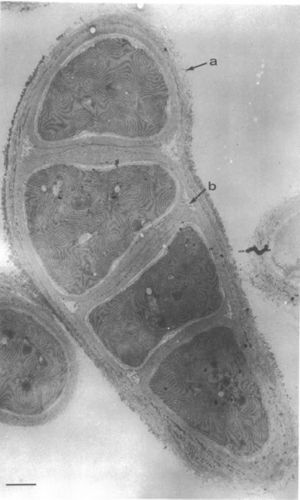 Electron micrograph of a cross-section of Pleurocapsa. The external F layers stretch (a) or tear (b) as the cells increase in volume. From Waterbury and Stanier.

Pleurocapsa bacteria can be found in unicellular or nonfilamentous aggregates and are capable of nitrogen fixation. All cyanobacteria have a distinctive cell wall structure: the inner wall is electron dense and is mostly composed of peptidoglycan (PG layer); the surrounding layer is thicker, has a lower electron density, and contains lipopolysaccharides similar to the outer membrane of Gram-negative bacteria (OM layer); and the external layer has a fibrous structure and is closely pressed to the outer surface of the OM layer (F). When a Pleurocapsa vegetative cell enlarges, the PG and OM layers remain at a constant width. The F layer, though, increases in thickness continually throughout the time that the cells enlarge (Waterbury and Stanier 1978).

Pleurocapsa cells contain the compound scytonemin, which is a UVR-screening compound. This compound along with mycosporine-like amino acids, reactive oxygen metabolite "quenchers" (carotenoids, superoxide dismutase, catalase or peroxidases), and DNA repair processes such as excision repair and photoreactivation protect the cells from UVB (280-320 nm) and UVA (320-400 nm). This is important because UVB and UVA harm photosynthesis by "direct lesions of molecular targets or indirectly by production of reactive oxygen metabolites" (Whitton and Potts 2000).

Pleurocapsa can grow in freshwater or in saline environments. Since it can occasionally calcify, it sometimes plays a part in forming calcified stromatolitic structures at the bottom of alkaline freshwater lakes. Studies of cyanobacterial communities inhabiting costal hypersaline environments found that Pleurocaspa inhabits gypsum nodules. Pleurocapsa sp. can also be found growing in intertwined communities with Calothrix sp. - the communities consist of tapered filaments of Calothrix embedded in an amorphous mass of Pleurocapsa cells. These communities, which exist in microbial mats in hot spring environments, are generally grazer-resistant. One grazer, the herbivorous ostracod Potamocypris sp., eliminates Oscillatoria trichomes rapidly but does not eliminate Pleurocapsa sp. and Calothrix sp. communities. In fact, a comparison of springs with and without Potamocypris and other ostracods, found that Pleurocapsa/ Calothrix were dependent on grazers - the springs without ostracods were overgrown with Oscillatoria (Whitton and Potts 2000). 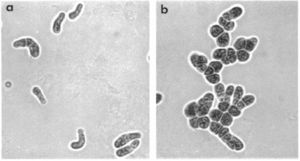 Light micrographs of Pleurocapsa a) asymmetric outgrowth of baeocytes and b) cell aggregates with filamentous appendages. From Waterbury and Stanier. 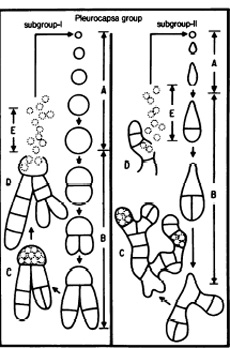 Different strains of Pleurocapsa divide in different ways; however, they begin with baeocyte enlargement that can be symmetric into a spherical vegetative cell or asymmetrically into an elongated vegetiative cell. Cell aggregates are then formed from binary fission in irregular planes - the size and complexity of this binary fission is different for individual strains. Some strains result in small, compact bundles of cells while others result in larger, more intricate structures with several pseudofilamentous growths extending from a central mass of cells. (Prokaryotes)

Waterbury, John B. The Prokaryotes: An Evolving Electronic Resource for the Mircobiological Community: The Cyanobacteria-Isolation, Purification, and Identification. (Release 3.0, 5/21/1999). 2004. Springer-Verlag New York, LLC.

Waterbury, John B. and Roger Y. Stanier. 1978. "Patterns of growth and development in pleurocapsalean cyanobacteria." Microbiological Reviews, vol. 42, no. 1. American Society for Microbiology. (2-44).