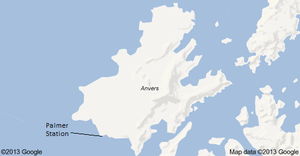 Palmer Station, where the organism was first found, is located on the south end of Anvers Island.

First discovered in 1986 off the coast of Anvers Island, near the U.S. Palmer Station. It is a chemoorganoheterotrophic, extremely psychrophillic gas vacuolate bacterium. It is an encapsulated, cigar-shaped, gram negative rod. It is aerobic as well as catalase and oxidase positive. When discovered, 16S ribosomal DNA sequencing showed that it was unique, which led to the establishment of the Polaromonas genus. It is the first reported gas vacuolate member of the beta subgroup of the Proteobacteria. [1] 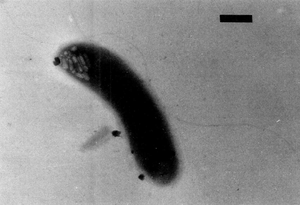 A micrograph of the organism, note the gas vacuoles at the top. [1]

The bacteria which were studied were short, unicellular, gram-negative rods(0.8 by 2 to 3 µm) that typically produced gas vacuoles which appeared as bright refractile areas within the cells. [1] While the cells were non-motile when cultured, the appearance of flagella suggests that they are capable of self-propulsion.

Colonies are snowy white, circular, and convex with smooth surfaces and entire edges. The more gas vesicles within the cells, the whiter the colony. [1]

The bacteria grew when the tryptone, yeast extract, beef extract, and vitamins of SWC-m were replaced with vitamin-free Casamino Acids, indicating that vitamins are not required for growth. [1]

The carbon sources that the bacteria was found to be able to utilize were lactate, glutamate, arginine, succinate, alanine, malate, ornithine, and fumarate. [2]

Fatty acid analysis revealed an interesting finding. 74 to 79% of the fatty acid content was found to be 16:1 w7c. This predominance of a single fatty acid is highly unusual in bacteria, and is the highest level of 16:1 w7c that has been seen. [1] High levels of saturated fatty acids can be expected in psychrophiles as it is a mechanism utilized to prevent freezing. P. vacoulata's high concentration of 16:1 w7c may well be a strong indicator that this fatty acid is particularly adept at protecting the bacteria in this specific environment.

To date Polaromonas vacuolata has only been isolated in water samples taken from beneath the sea ice in Antarctica off the Palmer Peninsula near Anvers Island. It has been speculated that they may be unique to regions with vertical stratification such as those occuring within and beneath the marine ice around Antarctica and that this limited habitat kept them from being discovered prior a 1986 expedition. [2]

No P. vacuolata bacteria were isolated in samples collected from depths below 25m. [2]

In 2004 another organism was proposed for the genus Polaromonas, Polaramonas Napthalenivorans CJ2, which is an aquatic gram-negative, non-spore forming, non-motile coccus. It is capable of growth with naphthalene as its sole carbon and energy source. [3]

The two most closely related species when the organism was first discovered were Rhodoferax fermentans, a nonsulfur purple bacterium, and V. paradoxus, a chemoorganotroph and facultative lithoautotroph. [1] This relationship was found through analysis of the 16S rDNA sequences of the bacteria by simple sequence homology, although phenotypically the organisms are not similar.

At this time, there are no diseases related to this organism have been observed.