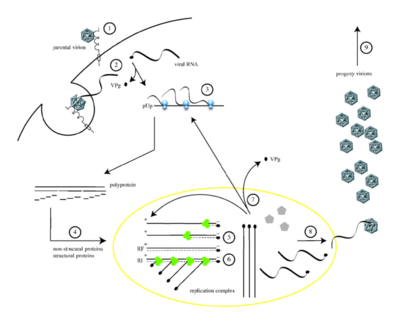 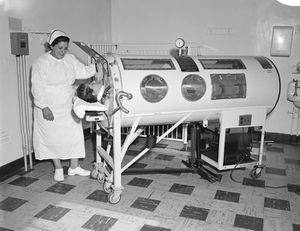 Specialized intervention is required when bulbar polio damages the phrenic nerve, which innervates the diaphragm, and significantly affects a patient’s ability to breathe. This life-threatening complication prompted research scientists in the 1920s to research resuscitation techniques leading to the emergence of a negative-pressure ventilator that would come to be known as the iron lung. Phillip Drinker and Louis Agassiz Shaw showed that pressure could be controlled in a closed container to induce inhalation and exhalation in a cat whose diaphragm had been paralyzed with South American arrow-poison curare. Drinker and Shaw’s research led them to modify their design to accommodate a wide range of patients while addressing the problems of earlier resuscitation techniques. The 1929 Drinker respirator consisted of a cylindrical, metal tank, which encased the patient, and a rubber gasket that provided a seal around the patient’s neck in order to maintain internal pressure. Improvements to the design cut the price in half to about $1,500, and by 1959, 1,200 tanks were in use in the United States. Treatment for respiratory failure has vastly improved since the creation of the iron lung, but 40 of the respirators were still in use as of 2004.