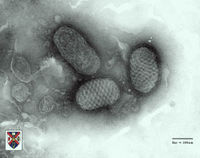 The virions of poxviruses consist of a surface membrane, a core, and lateral bodies, or a surface membrane, a core and lateral bodies. They may or may not have an envelope. They produce extracellular and intracellular particles during their life cycle and can occur in two phenotypes. They may be enveloped during their extracellular phase. Extracellular virions intiate the infection. The virus may be sequestered within inclusion bodies that are not occluded and typically contain one nucleocapsid. The virion capsid is enveloped. The virions are generally ovoid and brick shaped, or phlemorphic. The ovoid virion is 140-260nm in diameter, 140-260nm in height and220-450nm in length while the pleomorphic virion is 160-190nm in diameter and 250-330nm in length.The virion is composed of an external coat containing lipid and tubular or globular protein structures enclosing one or two lateral bodies and a core, which contains the genome, displaying tubular units, or globular units, or regular spiral filaments. The core is unilaterally concave, or is biconcave, or is cylindrical with one lateral body, or two lateral bodies. Lateral bodies are usually lens-shaped and nested between the core membrane, or between the surface membrane.