The genome of the poxvirus is unsegmented and contains a single molecule of linear double-stranded DNA. The complete genome is 130000-375000 nucleotides long. The genome has a guanine-cytosine of 35-64% but only 20% for Entomopoxviruses. The genome has terminally redundant sequences that have reiterated inverted terminal sequences which are tandemly repeated. The genome sequence is repeated at both ends. The double-stranded DNA is covalently bonded and is cross-linked at both ends. (source ICTV dB Descriptions)

The virions of poxviruses consist of a surface membrane, a core, and lateral bodies, or a surface membrane, a core and lateral bodies. They may or may not have an envelope. They produce extracellular and intracellular particles during their life cycle and can occur in two phenotypes. They may be enveloped during their extracellular phase. Extracellular virions intiate the infection. The virus may be sequestered within inclusion bodies that are not occluded and typically contain one nucleocapsid. The virion capsid is enveloped. The virions are generally ovoid and brick shaped, or phlemorphic. The ovoid virion is 140-260nm in diameter, 140-260nm in height and220-450nm in length while the pleomorphic virion is 160-190nm in diameter and 250-330nm in length.The virion is composed of an external coat containing lipid and tubular or globular protein structures enclosing one or two lateral bodies and a core, which contains the genome, displaying tubular units, or globular units, or regular spiral filaments. The core is unilaterally concave, or is biconcave, or is cylindrical with one lateral body, or two lateral bodies. Lateral bodies are usually lens-shaped and nested between the core membrane, or between the surface membrane. (source ICTV dB Descriptions) 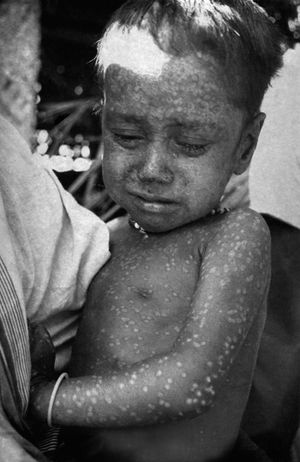 Smallpox had already been eradicated from most countries in Europe and the US by 1940s but it still posed a serious threat in the Indian subcontinent and much of Africa in the 1960s. The World Health Organization (WHO) decided to take strong actions for the eradication of the disease and listed smallpox on the top of the list for eradication in 1967. The WHO smallpox eradication unit was set up in the same year.

Smallpox has been eradicated globally but there are concerns about the potential use of variola virus as a weapon of terror. As a result, destruction of the last official remaining smallpox stocks held in Russia and USA has now been postponed indefinitely. The possibility of the emerging or re-emerging of variola, monkeypox, camelpox, taterapox or any other orthopoxvirus as a threat to human health increases as the proportion of the world population that is immunologically naïve for orthopoxviruses increases. The possibility of rat to human transmission of cowpox infection, or other forms of OVPs jumping species and adapting to mankind, increases because of the parallel increase in immunosuppression due to AIDS. These possibilities justify the retention of adequate stocks of vaccinia, which can be used as vaccine, to combat poxvirus infections.

It is also unclear whether one single difference, a few differences or all differences between the genomes of viruses such as camelpox and smallpox are responsible for the inability of camelpox to cause human diseases. Hence, genetic modification of camelpox to delete genes that are present in camelpox but absent in smallpox might be higly dangerous. Genetic changes to cowpox could trigger reactions that might make humans susceptible to cowpox. Poxviruses could still pose serious threats to humans.