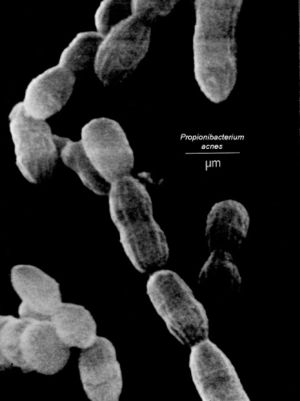 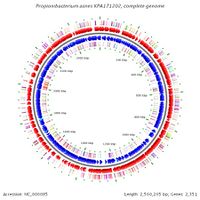 The genome of P. acnes has been sequenced in its entirety and has been shown to consists of a single 2.56026 Mbp circular DNA plasmid containing 2351 putative genes coding for 2297 known protein products and constituing a 60% G-C (guanine-cytosine) content. [2] (from National Center for Biotechnology Information Database)

P. acnes shares its environment with a variety of different bacteria including Pityrosporum ovale, Staphylococcus areus, Corynebacterium aenes, and Staphylococcus epidermidis among others. These bacteria share some metabolic similarities with P. acnes and some of which have been studied as possible contributors to various human pathologies.

The role of P. acnes in human pathology is complex. It has been associated with a wealth of human pathologies including pulmonary angitis, endocarditis, sarcoidosis, corneal ulcers, hyperostosis, cholesterol gallstones, allergic alveolitis and synovitis, pustulosis and most commonly acne vulgaris. Acne vulgaris is the most widely studied of these associated illnesses characterized by red inflammatored lesions on the skin. These lesions are thought to be caused by the join effects of degradative enzymes like the lipases utilized by P. acnes which damage host tissue, and surface proteins or more specifically heat shock proteins which stimulate immune infiltration. Others include: pilosebaceous unit androgen sensitivity, linoleic acid-deficient sebum, P. acnes and inflammation. P. acnes is thought to be the major contributor to this dermatological problem because antibotic therapy has shown to reduce the population density. Research in this area is ongoing and it is still not known why the presentation of acne goes away despite the presence of high levels of P. acnes colonies in the pilosebaceous units, persistence of androgens, persistently amounts of sebum production and why P. acnes colonies are found in both inflammed acne lesions and normal sebaceous tissue at all.

P. acnes' production of a fatty acid isomerase has been investigated as possible canidadate for use in a dietary enrichment program which would help produce large quantities of supposed beneficial conjugated linoleic acids (CLAs) which might be theraputic applications in the treatment of cancer, obesity and diabetes.