Difference between revisions of "Providencia stuartii"

Providencia stuartii is a gram-negative bacteria.

In laboratory settings,it is best cultured in Nutrient Agar or Columbia agar, with growth best at 37C and a mesophilic temperature range. It is of risk group 2 on the biosafety level[5].

P. stuartii is ubiquitous, being commonly found in water, soil, and animal reservoirs [2].

It is responsible for many UTIs in patients under long term catheterization and has a high degree of antibiotic resistance, a major concern for hospitals and nursing homes where many patients are vulnerable to infection from this microbe. Treatment, once infected, is difficult.

It has two porins, Omp-Pst1 and Omp-Pst2. It primary expressed Omp-pst1 in a rich medium, which is mildly anion selective and more permissive of beta lactam antibiotics. In comparison, Omp-Pst2 has atypical voltage gating behavior and could play a role is charge distribution across the outer membrane. When Omp-Pst2 was knocked down, P. stuartii growth was retarded, indicating that this porin plays an important role in development[1].

Providencia stuartii has many of the characteristics common to gram-negative bacteria. Providencia stuartii has a cell envelope. This cell envelope is comprised of a thin peptidoglycan cell wall which lies between a cytoplasmic cell membrane and an outer membrane, as seen in Figure 4. The outer membrane contains lipopolysaccharides which consist of: lipid A, core polysaccharide, and O antigen in its outer leaflet and phospholipids in the inner leaflet (Salton, 1996.)Between the outer and cytoplasmic membrane, in what is known as the periplasmic space. Within the periplasmic space is a gel-like matrix called periplasm see Figure 4. Since it is a gram negative bacteria the S-layer is directly attached to the outer membrane rather than to the peptidoglycan (Salton 1996).Proteins known as porins also exist on the outer membrane which act as channels and allow small ions and molecules through the membrane (NCBI). P. stuartii are motile by peritrichous flagella.

P. stuartii is facultatively anaerobic and is a chemoorganotrophic. P. stuartii has both a fermentative and respiratory metabolism [6].

Figure 2: Urease acts as a catalyst for the transformation of urea into ammonia. From: European publication server

P. stuartii is a urease-positive species] [1]. This is significant because ureases are enzymes that catalyze the hydrolysis of urea into carbon dioxide and ammonia. This can have health implications for humans and animals, when P. stuartii live in the urinary tract. Urease activity is a known contributing factor to the development of urolithiasis, also known as kidney stones. 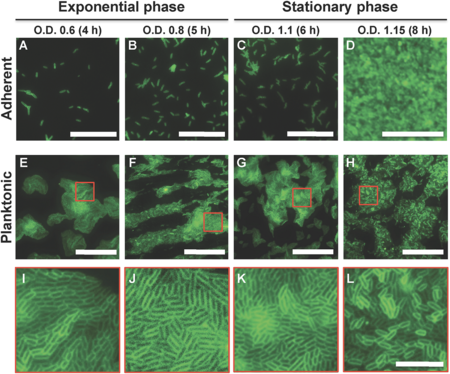 Figure 4: Example of leftover floating communities once planktonic cells had been washed away, giving evidence to the bacteria's highly social cell-to-cell interaction prior to biofilm formation [1

P. stuartii’s resistance to antibiotics also stems from its biofilm formation. It has a ‘highly social behaviour’, where cell to cell contact occurs prior to attachment of cells onto the surface. These floating communities precede biofilm formation and then coexist with it once a biofilm is created. These biofilms are majority living cells. It can form this biofilm over a large range of pH, from 6-9 and can consolidate at pH 5, showing great resistance to extreme environmental conditions. Biofilm genesis and attachment is favored at pH >8 and can attach directly to a urinary catheter. Biofilms can also resist high concentration of urea (500mM), calcium and magnesium (up to 50mM) and when presented with these stressors will consolidate. P. stuartii biofilm dispersion is also high and infections that were originally in the urinary tract can migrate to other organs and cause a variety of issues including meningitis and endocarditis [1].

It has also been proposed that the biofilm formation limits the diffusion of urea into the extracellular matrix of P. stuartii biofilms. Porins, an outer membrane protein of the biofilm, also likely play an effect in reducing urea accumulation in the periplasm (the gel-like matrix in the space between the inner cytoplasmic membrane and the bacterial outer membrane in gram negative bacteria) [1].

P. stuartii is an opportunistic pathogen, with those infected mainly the elderly under long-term catheterization. It is reported that it is found in 4 of 100,000 hospital admissions of the general population, but is responsible for 9% of UTIs in patients under long-term catheterization, with an inhospital mortality rate of ~30% [2]. It often co-infects with P. mirabilis, which is also urease positive, to sustain itself in the harsh urea environment of the urinary tract.

Though P. stuartii often does not cause serious disease, it has high intrinsic multidrug resistance (MDR) phenotype due to the inducible encoding of AmpC β-lactamase, an enzyme that can destroy the antimicrobial activity of antibiotics such as penicillin and cephalothin [5]. Though commonly causing UTIs, these can progress to bacteremia if not treated, which can be difficult due to the multidrug resistance mentioned above. To prevent the spread of Providencia drug resistance, infection control practices, such as hand-hygiene and disinfection of hospital equipment, are needed as a single antimicrobial agent to combat them is difficult to create and adaption comes quickly[2].