Difference between revisions of "Pseudomonas corrugata" 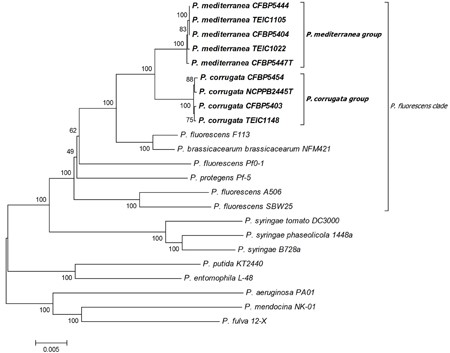 Pseudomonas corrugata consists of at least 87 different strains (Catara et al., 2002) and there are at least 25 more species in the Pseudomonas fluorescens group. In total there are at least 132 species within the genus. There are also a total of 7 groups within the genus. The Pcor species epithet “corrugata” refers to the typical morphology of bacterial colonies on NDA; slightly raised, with a wrinkled-rough surface and undulate margins that produce a yellow diffusible pigment (Scarlett et al., 1978). This bacterium is one of the non-fluorescent Pseudomonas species.

P. corrugata was discovered in 1978 by Roberts and Scarlett (Scarlett et al., 1978). This microbe is significant because uncontrolled outbreaks of it in agricultural communities can severely damage tomato crops for a season, having a huge economic impact. This bacteria attacks the pith of the tomato plant causing necrosis. Necrosis is rotting of the cell structure. P. corrugata produces wrinkled and, rarely, smooth colonies on yeast peptone glucose agar or nutrient dextrose agar; yellow to brown diffusible pigments are frequently produced. Disease symptoms include; typical symptom on tomato is necrosis and/or hollowing of the pith of the stem, the syndrome determines loss of turgidity of the plant, hydropic/necrotic areas, and long conspicuous adventitious roots on the stem. In vitro assessed against plant pathogenic fungi and bacteria, as well as the phytotoxin indicator microorganism Rhodotorula pilimanae and Bacillus megaterium: in vivo used against pre- and post-harvest plant pathogens (Catara, 2007).

The closest relative of P. corrugate is Pseudomonas brassicacearum with 97% similarity, based on NCBI BLAST search. 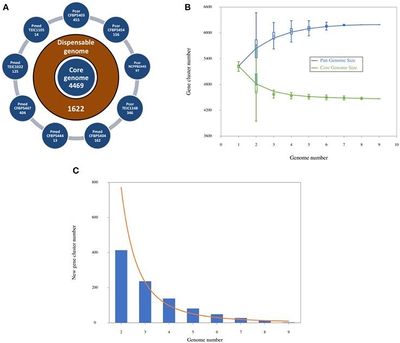 Figure 3: Taken from Trantus et. al. 2015. Part A shows the numbers of “shared and specific genes between Pseudomonas corrugata and P. mediterranea based on clusters”. The circles show singletons of each genome. The intermediate circle shows the number of dispensable genes, and the inner one shows the core genome size. Part B shows the “Core-genome and pan-genome sizes” . Part C shows the number of new genes after adding a new genomes into the dataset.

P. corrugata is a gram-negative, oxidase-positive, non-spore forming rod, and non-fluorescent on King's B medium (Catara et al., 2007). P. corrugata produces wrinkled and, rarely, smooth colonies on yeast peptone glucose agar or nutrient dextrose agar; yellow to brown diffusible pigments are frequently produced. Disease symptoms include: typical symptom on tomato is necrosis and/or hollowing of the pith of the stem, the syndrome determines loss of turgidity of the plant, hydropic/necrotic areas, and long conspicuous adventitious roots on the stem. Also, there is no production of fluorescent compounds, it builds up medium sized chains of poly(hydroxyalkanoates), and is incapable of producing levan (Catara et al., 2002).

Plant-pathogenic bacterium that causes pith necrosis in tomatoes (Anzai et al., 2000). The first case was reported in April of 2015 in two countries simultaneously in Georgia (Kůdela et al., 2010). A range of 10 to 15% of the crops were affected (Kůdela et al., 2010). Infections are more evident when the first trusses ripen on the tomato plants. Initially, only slight wilting in the hottest part of the day and at times chlorosis of the apex can be seen. The characteristic symptom of the disease, as shown by its name, is stem pith necrosis and the pith may appear as necrotic, dry and slightly disaggregated in the core, hydropic, white or dark but presenting a hard core and necrotic in the areas near the xylom. The disease starts from the base of the stem and works up to the leaf stems and bunches. Necrosis can also affect the taproot and, occasionally, the rootlets (Catara et al., 2002). Under test conditions P. corrugata was also able to infect peppers, tobacco, and chrysanthemum (Catara et al., 2002). 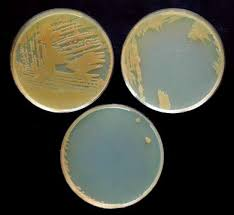 Figure 4:The image shown above shows the difference in P. corrugata populations depending on how far away the sample was taken from the stem. The top left shows the plate that was swabbed with the area closest to the infected area of the stem and the bottom agar plate shows the area that was the furthest from the pathogen’s origin.Image credit: (Krejzar 2010)

● “Association with the collapse of tomato plants in rockwool slab hydroponic culture” (Kůdela et al., 2010). This study is attempting to understand how pith occurs in tomato plants that could trigger an outbreak such as the Rockwool Slab Hydroponic incident in 2008.

● Suppression of damping-off in maize seedlings by P. corrugata (Pandey et al., 2001). This is a method that may be able to improve grain yields by introducing P. corrugata to corn seedlings.

● Pseudomonas corrugata (NRRL B-30409) This is another agricultural method that researchers are hoping will improve crop yields(Trivedi et al., 2007).