Psychromonas ingrahamii was monitored for steady growth in the Ordal’s sea water cytophaga medium (SWCm). The colonies on plates appeared to be circular, white and smooth. Phase contrast and transmission electron micrographs of cells revealed various features of organism including cell size, shape and structure.(3)

Psychromonas ingrahamii is a Gram-negative bacterium, rod-shaped and non-motile. It is facultatively aerobic, indicating its ability for both respiratory and fermentative metabolism. It is about 6-14 µm long and grows in a moderate salt concentration environment-lack of salt resulted in no growth whereas high concentration of salt showed weak growth rate. Psychromonas ingrahamii lives in neutral habitat with optimal pH range from 6.5 to 7.4. It reduces inorganic nitrate and is a heterotroph utilizing many organic compounds for carbon sources. However, interestingly, it does not hydrolyze starch or gelatin and seems to have no flagella unlike other organisms in its family.(2)

Psychromonas ingrahamii is found to grow at subfreezing temperature (lowest growth temperature of any organism studied so far) -12°C with 240 hours generation time. On the other hand, the organism shows 12 hours generation time at 5 °C, its optimum temperature. Cells were arranged in singles, pairs or in a short chain.(2,3) Under electron microscopy, two different shapes of gas vacuoles were found, which is unusual and only seen in Halobacterium halobium-a halophilic archaeon, a different type of prokaryotic microorganism from bacteria, that lives in an environment with high salt concentration.(9)

The study of Psychromoas ingrahamii is significant because it could spur the interest to discover and assess the diversity of psychrophilic organisms and to learn how they can sustain and grow at low temperatures. Also, study of psychrophiles may provide insight into whether other planets support such life at subfreezing temperatures.(3)

DNA purification reagent-hexadecyltrimethylammonium bromide miniprep protocol-was used to collect DNA to study base composition and the HPLC (high performance liquid chromatography). Psychromonas ingrahamii has a genome size of approximately 4.5 Mb. Among the four different bases, the base pair that forms three hydrogen bonds, G+C content was 40 mol%. Other members in its genus psychromonas have the range from 38.1 to 43.8 mol%.(2,3)

16S rRNA gene of Pychromonas ingrahamii was amplified by PCR (polymerase chain reaction) and was sequenced. The sequence was inserted into the National Center for Biotechnology Information (NCBI) web site (ncbi.nlm.nih.gov). One of the five organisms with high similarity sequences was Psychromonas antarcticus with 96.8% sequence similarity.(3) Although Psychromonas antarcticus was found to be the most closely related known species based on DNA sequence, interestingly they exhibit significant different phenotypic features. Pychromonas antarcticus is relatively small, motile and does not have gas vesicles. For further comparison, the sequences of E. coli and organisms from other groups within the Proteobacteria were aligned with Psychromonas ingrahamii to draw a phylogenetical relationship.(3,8)

Pychromonas ingrahamii are large rod-shaped, arranged in singles or pairs, sometimes in a short chain. Its length is about 6 to 14 µm, relatively large compared to the rest of the speceies within the same genus Psychromonas. Pychromonas ingrahamii is the only species producing gas vacuoles, non-motile, and able to hydrolyze polymers of neither starch nor gelatin unlike other members.(2,3)

Two different shapes of gas vacuoles were found in the organism. One was large in number, short, wide cylinder-shaped with conical tips and the other was seen rarely with longer length but narrow width with conical tips also. Within the gas vacuoles, there are small, rigid, protein-like subunit vesicles. These are permeable to gas and minimize the cell’s density and therefore, provide buoyancy. However, the exact function of these gas vacuoles in a particular polar sea ice environment is not known yet.(2)

When cultured in the media, the colonies looked white, smooth and convex. Pychromonas ingrahamii can utilize a variety of carbon sources including D-galactose, D-mannitol, N-acetylglucosamine, cellobiose, sucrose, fumarate, DL-lactate, and glycerol. Carbon sources fermented are D-glucose (gas), lactose, and Trehalose.(2)

The fact that Psychromonas ingrahamii can grow and reproduce with slow rate, 10 days generation time, at -12°C indicates possibly different physiological, metabolic activities from those at high temperatures. At low temperatures, protein denaturation is not likely to occur but instead, for the psychrophiles, the membrane transport and fluidity are the main concerns.(2,5)

When liquid water contains salt, its freezing point drops below 0°C. Organisms live in liquid water at subzero temperatures. Sea Ice microbial community (SIMCO) is the example inhabited by diatoms, protists and bacteria in cold environments. The SIMCO consists ~10% of the ocean surface. The sea ice in SIMCO environment ranges from -1.8°C to -30°C or lower.(3,10)

According to different seasons, the salinity, the temperature, and the availability of light and nutrients change in the sea ice environment. Approximately 10 to 20cm below the sea ice column from the ice-water interface, SIMCOs are prevalent where the nutrients from the water and surface light exist and where there is high chlorophyll a content. Recently, it was reported that the SIMCOs exhibit a great diversity of bacteria. Even though Psychromonas ingrahamii is the only species within the Psychromonas genus, there are many bacteria with gas vacuoles and they are phylogenetically diverse.(4,10)

In polar habitats, activities of numerous algae are accountable for the primary production. Algae dominate the SIMCOs population and heterotrophic bacteria are the secondary producers.(7,10) In 1980, Sullivan and Palmisano from University of Southern California found diverse bacterial community in McMurdo Sound, Antarctica and included various pictures of many different types of bacteria living in the sea ice. 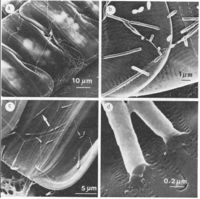 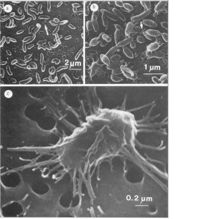 Psychrophilic organisms are interesting and noteworthy in the field of biotechnology because of their distinct physiology from other organisms. They must have adapted special mechanisms and metabolisms to thrive in such lower temperature environments. Many psychrophilic organisms including Psychromonas ingrahamii contain cold-adapted enzymes that are being studied with great interest. Since they must regulate their membrane fluidity and transport, many researches are studying psychrophilic organisms' enzymes to find more about how life is sustained at low temperature. Furthermore, cold-adapted enzymes may be considered in products and industries such as food processing (fermentation, bakery), cleaning agents, and degradation of xenobiotic compounds in cold climate.(1,5)

According to the recent research, protein folding is responsible for forming the ability to live in cold environments. Further discovery of metabolism and mechanisms of psychrophilic organisms’ cold adaptation would lead to our great advantage to understand protein function and structure more efficiently.(1,5)

One of the Earth’s pristine environements is Antarctica. There have been a few spills of fuel over the past and this spurred and initiated studies to find out the ability of Antarctic microorganisms to degrade hydrocarbon. Surprisingly, some Antarctic bacteria were found to degrade many hydrocarbons of fuel spills from experiment carried out in Eastern Antarctica.(1,6)

However, despite these great advantages and findings applicable to biotechnology, some difficulties reside in studying psychrophilic organisms particularly including Psychromonas ingrahamii. It is crucial to maintain the conditions in the growth medium to provide the environment for psychrophilic organisms to grow. Thus, consistent low-temperature conditions should be maintained throughout the growth experiments for many weeks.(3)

The discovery of the first psychrophilic organism by Forster in 1887 drew much attention and spurred the interest in microorganisms living in unexpected environments.(9) Since then many studies have been done to determine the physiology of the “cold-loving” organisms. 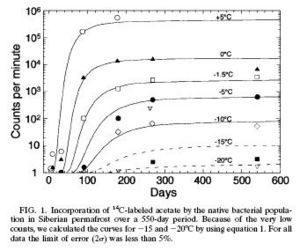 Since the discovery of the new species Psychromonas ingrahamii from Point Barrow, Alaska, this gas vacuolated bacterium was studied further in detail. In this research, the two different types of gas vacuoles, growth rate in different salt concentrations, fatty acid analysis, DNA base composition, and growth temperature range, list of carbon sources utilized and fermented were determined.(2)

Recent studies have found many novel psychrophilic organisms from cold habitats. This particular research was to discover what the Antarctic prokaryotes produce and how their enzymes show cold-adaptability. The ability to produce polyunsaturated fatty acids (PUFAs) is observed in recent Antarctic species. David Nichols and John Bowman from University of Tasmania, Australia further have researched the production of PUFAs, cold-adapted enzymes and physiology of Antarctic prokaryotes.(1,5)

"Metabolic Activity of Permafrost Bacteria below the Freezing Point."

In this particular research, metabolic activity was observed by incorporating 14C radioactively labeled acetate into lipids of a cultured population of Siberian permafrost bacteria. The metabolic activity pattern was measured and it resembled growth curves. Interestingly, the duration and how fast each species reached the stationary phase (nutrient depletion and buildup of waste products) depended on the temperature.(5)