Difference between revisions of "Pyrobaculum"

A Microbial Biorealm page on the genus Pyrobaculum 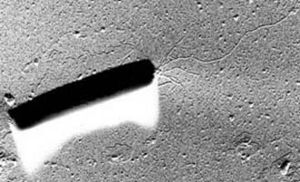 PyrobaculumImage by Reinhard Rachel, The Tree of Life Project.]

As its latin name, Pyrobaculum (the "fire stick") suggests, the archaeon is rod-shaped and isolated from locations with high temperatures. It is Gram-negative and its cells are surrounded by an S-layer of protein subunits.

P. aerophilum is a hyperthermophilic and metabolically versatile organism. Different from other hyperthermophiles, it can live in the presence of oxygen and grows efficiently in microaerobic conditions.

So far, only the genome of one species, P. aerophilum, has been sequenced. Its circular genome sequence is 2,222,430 Bp in length and contains 2605 protein-encoding sequences (CDS)

Under anaerobic conditions, the archaeon reduces nitrate to molecular nitrogen via the denitrification pathway. Most species grow either chemolithoautotrophically by sulfur reduction or organotrophically by sulfur respiration or by fermentation. Cells are rod-shaped with almost rectangular ends and are about 1.5-8 * 0.5-0.6 µm. Pyrobaculum is motile because of peritrichous or bipolar polytrichous flagellation, and its colonies are round and grey to greenish black. The species are either faculatively aerobic or strictly anaerobic. The growth was observed on yeast extract, peptone, extract of meat, but not on galactose, glucose, maltose, starch glycogen, ethanol, methanol, formamide, formate, malate, propionate, lactate, acetate, and casamino acids.

The first of the Pyrobaculum species to be genetically sequenced, P. aerophilum (rod-shaped, 3-8 * 0.6 µm), has a rare characteristic for an archaeon because it is capable of aerobic respiration (aerophilum = "air-loving"). This is evident from the fact that the archaeon grew only in the presence of oxygen when nitrate was absent. It produces colonies that are round and greyish yellow. It utilizes both organic (maximal cell densities were observed with complex organics such as yeast extract, meat extract, tryptone, and peptone as substrates) and inorganic compounds during aerobic and anaerobic respiration. Also, use of elemental sulfer for growth was observed. Further, P. aerophilum grows between 75 and 104°C with an optimal growth temperatrue at 100°C.

To this date, the strains of Pyrobaculum have been isolated from neutral to slightly alkaline boiling solfataric waters and shallow marine hydrothermal systems. P. aerophilum was isolated from a boiling marine water hole at Maronti Beach, Ischia, Italy. Further studies show that P. aerophilum grows under strictly anaerobic conditions with nitrate as the electron acceptor.