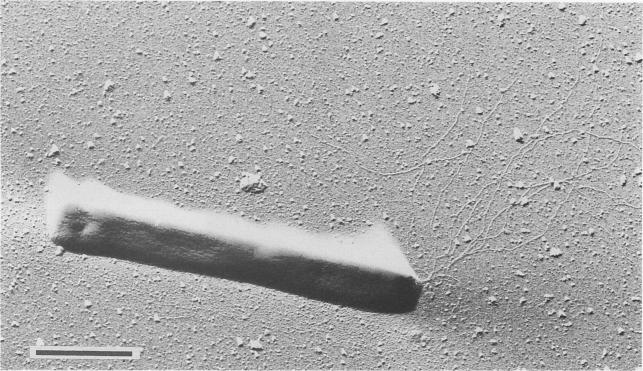 Pyrobaculum aerophilum cells were usually found to be 3 to 8 μm long and 0.6 μm wide. Very rarely, however, cells with a length of 20 μm appeared. Motility is achieved using monopolar flagellation with bundles of up to eight flagella. Each flagella averaged a diameter of 10 nm. Cells would transform into their terminal spherical phase mainly in the stationary-growth phase, at high nitrate concentrations, or pH values exceeding 8.0. Even in their terminal spherical phase, the cells can still enlarge or shrink depending on conditions. Colonies of Pyrobaculum aerophilum in their spherical phase exhibited greyish-yellow colonies with a harsh surface. Anaerobically conditioned cells in their normal rod-shaped phase exhibited a deep green color while aerobically grown cells in their normal rod-shaped phase exhibited a brownish yellow color. [2]

Pyrobaculum aerophilum grew in media ranging from temperatures of 75 and 104°C. At the optimum temperature of growth, 100°C, the optimal doubling rate of the cells was observed to be 180 minutes. At the extreme temperature range of 75°C, the doubling rate of the cells dropped to a rate of approximiately 5 days. There was no difference in growth rate when the archaeum was cultured either in aerobic and anaerobic conditions. When living conditions were observed in different pH conditions, life was observed from a range of pH 5.8 to 9.0. The optimum rate of growth was observed at pH 7.0. However, when Pyrobaculum aerophilum was introduced in an environment exceeding pH 8.0, no growth was observed. Also, when the pH was lowered to 5.5 or exceeded 9.0, rapid cell lysis occurred. Different salt conditions were also observed for growth and life. Optimal salt conditions were observed at 1.5% NaCl. Also, growth of cells was observed when there were no traces of NaCl in the solution; however, once NaCl concentrations exceeded 3.6%, no growth was observed. [2]

Pyrobaculum aerophilum is composed of a 2.2-megabase genome sequence. A whole genome analysis was computerized and experiments have confirmed that Pyrobaculum aerophilum and possibly all Crenarchaea lack 5’ untranslated regions in their mRNAs, and therefore do not appear to use a ribosome binding site. The lengths and dispersion of mononucleotide repeat-tracts uncovered that the Gs and Cs are highly precarious. This suggests that the archaeum could be lacking in a mismatch repair system. [1] 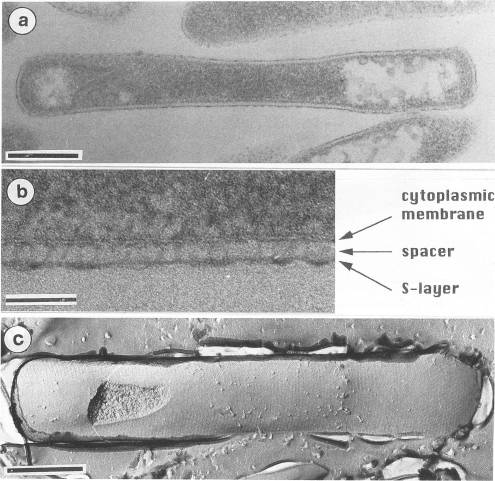 Pyrobaculum aerophilum has characteristics of both Thermoproteus and Pyrobaculum. The cylindrical rod-shape, the formation of terminal spheres, and the S-layer shows a close relationship to Thermoproteus and Pyrobaculum. However, the archaeum was unable to grow by sulfur respiration and growth was suppressed by the presence of elemental sulfur. The archaeum was also found to grow by dissimilatory nitrate reduction, organic compounds, and thiosulfate. Interestingly, nitrate reduction has only been observed within the heterotrophic extreme halophiles. [2]

Pyrobaculum aerophilum have a cell wall exhibiting a S-layer stationed on top of a cytoplasmic membrane. The S-layer was 5 nm in length on average and was anchored to the cytoplasmic membrane by a inner elongated domain (a spacer) that was 25 nm in length on average. The S-layer was consistent with other members of the genus Pyrobaculum including: P. islandicum, P. organotrophum, and T.tenax. [2]

Pyrobaculum aerophiluum is amazing in that it can utilize five different oxidants in respiration: nitrate, oxygen, arsenate, selenate, iron (III), and thiosulfate. During growth by nitrate respiration, nitrite and nitric oxide buildup was observed. However, no traces of ammonia was observed. When Pyrobaculum aerophilum was isolated with nitrite as an electron acceptor, no growth was obtained unless the nitrite was mixed with the presence of organic substrates. The products of nitrite reduction with the presence of organic substrates were nitrous oxide and nitric oxide. In conditions where both nitrate and nitrite were present, nitrate was completely consumed before nitrite was utilized. When growth with sulfur was diagnosed, an immediate inhibition of growth was observed and led to the eventual lysis of the cells. [2]

Pyrobaculum aerophilum is a hyperthermophilic microogranism and therefore resides in hot, anaerobic environments. Because of this, it is difficult to technically study and characterize the functions of hot microbial ecosystems. However, it is known fermentative microorganisms oxidize amino acids and sugars to carbon dioxide and short-chain acids (of which acetate is by far the most plentiful). Consequently, the successful dispensation of organic matter in these anaerobic environments requires the activity of acetate-degrading anaerobic microorganisms (Pyrobaculum aerophilum). [7]

Pyrobaculum aerophilum utilize amylomaltases, which are 4-alpha-glucanotransferases of glycoside hydrolase family 77 that transfer alpha-1,4-linked glucans to an alternative acceptor. The amylomaltase-encoding gene of Pyrobaculum aerophilum has been cloned and expressed in Escherichia coli. The gene product (PyAMase) was characterized and was found to display peak activity at 95°C and pH 6.5. Amylomaltase was discovered to act on gelatinized food-grade potato starch, producing a thermoreversible starch product with gelatin-like properties. This thermoreversible gel has potential applications in the food industry. [8]

Pyrobaculum aerophilum is being examined because of its ability to survive in extreme environments. Interestingly, Pyrobaculum aerophilum can grow aerobically, unlike most of its thermophilic relatives, making it acquiescent to a variety of experimental exploitations and a candidate as a model organism for studying archaeal and thermophilic microbiology. Projects have been initiated to extract and purify proteins for structure determination by NMR and x-ray diffraction. The resulting three-dimensional structure of Pyrobaculum aerophilum will provide the knowledge to understand and manipulate protein function. Additionally to being an ideal exemplary candidate, Pyrobaculuum aerophilum is heavily being analyzed because of its relationship to Crenarchaeaeocytes, which may be the eukaryote's closest prokaryotic kin. [9]

In one study, Pyrobaculum aerophilum was isolated to study how cellular proteins retain their natural folds under extreme living conditions. Recent studies using structural and computational tools have discovered that disulfide bonding is a crucial instrument for stabilizing proteins in many thermophilic organisms. Isolates of Pyrobaculum aerophilum reveal that the use of disulfide bonds include multiple protein-protein complexes, contrary to beliefs that individual protein complexes might be responsible for the composition of the native folds. In one complex, a citrate synthase homodimer contained two intramolecular disulfide bonds, which consequently led to a cyclization of each protein. This cyclization interlinked the two proteins and caused them to be inseparable. These protein interactions highlight the astonishing types of mechanisms created by evolution. [3]

Even today, a minute amount of molecular characteristics that are communal within all Archaea are recognized. In addition, many of the relationships between diverse groups within the Euryarchaeota are not openly understood. Thorough examinations on open reading frames in the genomes of 11 Archaea have been performed to explore proteins that are exclusive to all Archaea. The 11 archaea studied include: 3 Crenarchaeota - Aeropyrum pernix, Pyrobaculum aerophilum, and Sulfolobus acidocaldarius; 8 Euryarchaeota - Pyrococcus abyssi, Methanococcus maripaludis, Methanopyrus kandleri, Methanococcoides burtonii, Halobacterium sp. NCR-1, Haloquadratum walsbyi, Thermoplasma acidophilum, and Picrophilus torridus. The analyses of the open reading frames detected 1448 proteins that are unique to Archaea. Of the 1448 proteins, 6 of the proteins were unique to all Archaea, 10 others were missing only in Nanoarchaeum equitans, and a large number of other proteins were specific for various main groups within the Archaea. On the same note, 31 proteins were nearly present in all methanogens and 10 supplementary proteins were found only in select methanogens. The identified Archaea-specific proteins offer new molecular markers that are distinctive characteristics of Archaea and all of its main subgroups. The species distributions of these proteins provide new insights into the evolutionary relationships among different groups within Archaea, particularly regarding the origin of methanogenesis. [4]

4. Gao B, Gupta RS. "Phylogenomic analysis of proteins that are distinctive of Archaea and its main subgroups and the origin of methanogenesis." BMC Genomics. 2007 Mar 29;8:86.

Edited by a student of Rachel Larsen and Kit Pogliano.