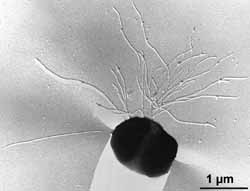 Pyrococcus has similar characteristics of other archaea such as Archaeoglobus, Thermoautotrophican, and Methanococcusin the respect that they are all thermophilic and anaerobic. Pyrococcus differs, however, because it's optimal growth temperature is nearly 100 oC and dwells at a greater sea depth than the other archaeons. Studying Pyrococcus helps give insight to possible mechanisms used to endure extreme environmental conditions like high temperatures and high pressure.

Pyrococcus species inhabit environments with extremely high temperatures such as undersea hot vents. Optimal growth conditions include a pH level of about 7, a salt concentration around 2.5%, and a temperature around 98oC. Growing in temperatures this high, it is easy to see why they are anaerobic since at these boiling temperatures hardly any oxygen will be available. In the example of undersea hot vents, where P. abyssi has been found, there is no sunlight and the pressure is around 200 atm in addition to the extremely high temperature. [[Image:pyrococcus_1.jpg|thumb|300px|right|A deep sea vent where P. abyssi has been located. Image courtesy of the BBC.