Pyrodictium abyssi is a gram negative, hyperthermophilic, anaerobic archaeon. This archaeon was first isolated in 1991 by Pley and Stetter. It was isolated from heat vents deep in the ocean called black smokers, which are formed as a result of volcanic activity deep beneath the ocean floor [8]. P. abyssi are capable of growing in temperatures ranging from 80-110oC but have maximum growth between 97-105oC and are capable of survival in an autoclave for up to an hour. Optimally, P. abyssi thrive at a pH of 5.5 but have been found to survive anywhere from 4.7-7.1. P. abyssi are capable of growing in NaCl concentrations ranging from .7-4.2% and are strictly anaerobic [3]. This archaeon is disc shaped and approximately .3-2.5µm in diameter and are .025-.05µm thick. P. abyssi grows in an extensive 3D network composed of cells and cannulae, which are hollow, extracellular tubules with a diameter of about 25nm. The cannulae bundle together to allow multiple cells to be connected [7]. This archaeon is a chemolithoautotroph and uses Hydrogen as an electron donor and Sulfur as an electron acceptor to perform inorganic redox reactions in extreme conditions. This archaeon could prove extremely useful in industrial biotechnology because it has been found to possess enzymes such as chaperone proteins and ATP synthase which are functional at high temperatures instead of denaturing [3].

The genome has not yet been sequenced, but using relationships between various hyperthermophiles with respect to their size, their structural organization and their phylogenetic relationship based on the content of the respectetive 16rDNA genes it is determined the entire genome of pyrodictium abyssi is a single circular chromosome and approximately 1.6Mb[1]. It is very similar to Hyperthermus butylicus (97% sequence coverage) and Pyrodictium occultum (96% sequence coverage), which is another sulfur reducing hyperthermophile belonging to the same genus. Both BLAST hits had E-values of 0 meaning there is essentially a zero chance to find a score as good.

Pyrodictium abyssi is a gram-negative bacteria that displays normal cell wall functions, but interesting features stem from the cell during cell growth. Pyrodictium abyssi grows in the form of a macroscopically visible network. It consists of cells entrapped in an extracellular matrix of hollow tubules, the “cannulae". One cannula penetrates the periplasmic space and the other cannula contacts the surface of the cell[6]. This indicates that the cannulae interconnect individual cells with each other on the level of their periplasmic space, but not into cytoplasmic membrane possibly attributing to its stability. Although the function of the cannulae still remains unknown, the linkage by cannulae therefore could enable cells to exchange metabolites, genetic information, or signal compounds[4]. 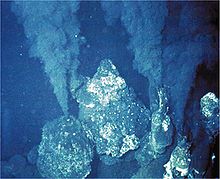