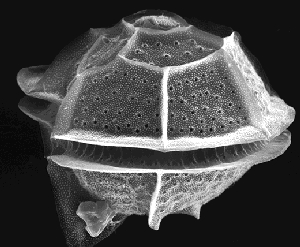 Pyrodinium bahamense can be found in the ocean near the shoreline of many countries throughout the world, though they are more common in the northern hemisphere. (8) Pyrodinium bahamense are spherical with armored plates surrounding it known as thecal. The thecal is covered with defensive pores known as trichocysts. (19) When agitated, they respond by glowing. (14) It has one horizontal spanning flagellum and one vertical propeller like one for locomotion.(19) In large numbers, these dinoflagellates bloom causing red tides also known as Harmful Algal Blooms (HABs). (8) They also produce neurotoxins that are especially potent during HABs. (8) When conditions become unfavorable, they become a cyst and stay like that until conditions improve. (20) Most literature mentions that serious studies of these organisms date back around the 1950’s, but does not include information regarding its originally isolation.

Very little of the genome for Pyrodinium bahamense has been sequenced so far. (1) The Amphiesma (the outer layer including the thecal) makes obtaining genetic data difficult, and may be why this has not been completed yet. (5) The DNA stored in the nucleus is in a compacted crystalline form, and they also do not have any histones to interact with their DNA. (2) The large amount and compacted form of the DNA is suggested to be the cause of their slow growth compared to other unicellular organisms. (2)

Pyrodinium bahamense foremost recognizable aspect would be the red coloring it gives tides during blooms. Its chlorophyll gives it the red coloring and the ability to photosynthesize. (3,14, 17) Mechanical stimulation (from breaking waves, etc.) will cause to organism to be visible from its glow. (14)

Aside from being consumed by larger plankton-feeding creatures, Pyrodinium bahamense is also preyed upon by another dinoflagellate, Noctiluca Scintillans. (7) The amphiesma on Pyrodinium bahamense integrate two protective mechanisms; the armor cellulose-like thecal plates, and the hundreds of protein-shooting trichocysts. (6) They also utilize bioluminescence as another defense when an agitating force is applied to them to scare the predator. (14) The final defensive mechanism they possess is the saxitoxins their endosymbiotic bacteria produce to kill off anything that eats them. (9) The sequestration of these toxins (most notably in shellfish) also affects the organisms that eat the shell fish, ranging from humans, to birds. (9)

Very large blooms of Pyrodinium bahamense are a consequence of weather patterns, sudden surplus of nutrients and predators not being able to keep them in check. Such blooms of these and other dinoflagellates can result in the widespread death of themselves and other organisms within the immediate area. (14) This is caused by Pyrodinium bahamense consuming much of the dissolved oxygen in the water. Once the oxygen runs out, the organisms die. (14) 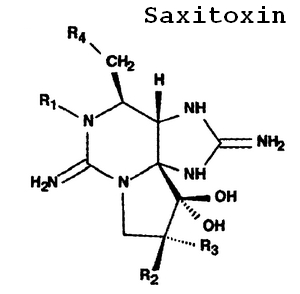 Pyrodinium bahamense, along with many other dinoflagellates, are known for secreting toxins that cause Paralytic Shellfish Poisoning (PSP). The group of toxins that are released by Pyrodinium bahamense are known as saxitoxins. While not particularly dangerous out in the open ocean, the toxin is sequestered in molluscian shellfish and is dangerous to mollusk consumers. PSP has a 15% mortality rate in the human population it effects. (8) Symptoms rapidly show up within an hour of eating contaminated shellfish, and consist of numbness, loss of motor function, incoherent, drowsiness and in the worst cases, respiratory paralysis. (8) More recent studies of PSP and Pyrodinium bahamense suggest that a variety of endosymbiotic bacteria are responsible for producing the saxitoxins.(9) Currently the FDA uses a testing kit known as MISTTM from Jellett Rapid Testing Ltd. to test PSP levels in shellfish. (10)

Luciferin and its enzyme Luciferase are the only compounds it produces of interest for its bioluminescence properties. The reduction reaction luciferase has on luciferin uses oxygen to produce the glow. (11, 12) The exact process of how mechanical stimulation can causes Pyrodinium bahamense (as well as other bioluminescent dinoflagellates) to glow is still unknown. (16) Once known, this could have potential use in research and military applications.

1) Michael Latz at the Scripps Institution of Oceanography was in charge of a research program in conjunction with the NAVOCEANO in order to assess the effect that bioluminescent dinoflagellates had on ship propellers for the navy’s references. The purpose of the project was to accumulate information to optimally navigate through bioluminescent bays to predict and detect other boats. Pyrodinium bahamense among other dinoflagellates were used in this study to predict the effect propellers will have in different areas in the world. (13)

2) In another project, M. Latz is visiting bioluminescent bays such as www.biobays.com in Puerto Rico to study what problems may exist in their ecosystems, using the bioluminescence levels of these bays as an indicator of change. This study can prompt the education of the local people in how to preserve their ecosystem and help maintain good tourism in the area. (14)

3) Sara Gasparich of Whitman College did a study at the same biobay M. Latz did. The purpose of the study was to measure the concentration of Pyrodinium bahamense in a few bays in the region. She concluded that the bay in Puerto Rico was a unique habitat that required protection from urbanization. (15)

20. Sarjeant, W., Lacalli, T., Gaines, G.. “The cysts and skeletal elements of dinoflagellates: speculations on the ecological causes for their morphology and development”. Accessed 24 Aug. 2007. <www.jstor.org>.