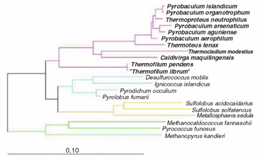 Based on 16s rRNA sequences, this phylogenetic tree was calculated using the maximum parsimony program (Huber 2006).

Pyrolobus fumarii are made up of cells that are regularly to irregularly lobed cocci. Chemolithoautotrophic growth by anaerobic and microaerophilic H2 oxidation with NO3-, S2O32-, and O2 as electron accepters. By doing so well at temperatures of 95ºC to 113ºC, our knowledge about the upper limits of life is expanded. (Huber et al. 2006)

The genome of P. fumarii is expected to contain many novel metabolic enzymes of commercial interest because it is able to survive on inorganic chemicals, carbon dioxide, and hydrogen. The genome is 1.85 million base pairs in length and contains approximately 2,000 genes. This organism, at first glance, seems to have an unusually high number of genes that have no obvious similarity to previously described genes from archaea and eubacteria (two major classifications of life). (Diversa 2001)

DNA Base composition Determined by a direct analysis of its mononucleosides and melting point analysis,Pyrolobus fumarii has a cytosine-guanine composition of 52.9mol% and 53.4mol% respectively. (Blöchl et al. 1997) 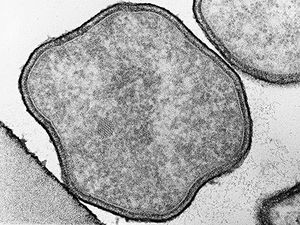 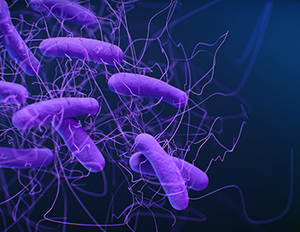 In addition, acetate, pyruvate, glucose, starch, or elemental sulfur are capable of inhibiting the growth of P. fumarii and these organic compounds do not contribute in growth stimulation. P. fumarii isolates elicited hydrogenase activity. It used methylene blue as the artificial electron acceptor and the process was membrane –associated. To allow existence in aggressive conditions, heat shock proteins were also detected in P. fumarii. Isolates were observed to have a chaperone-like heat shock protein. Recent study (Gonc¸alves et. al.) shows that the major organic solute composition of P. fumarii is DIP or Di-myo-inositol phosphate. The accumulation of DIP is considered to be one of the metabolic features of P. fumarii enabling it to survive as hyperthermophile living at the upper temperature and pressure limits for life. Metabolic features of Pyrolobus suggest its capability to exist in a pre-Earth condition with solely volcanic activity and liquid water conditions. (Diversa 2001)

Pyrolobus fumarii is an extreme hyperthermophile isolated in the wall of a black smoker, or a deep-sea hydrothermal vent formed by sulfur-bearing minerals from beneath the Earth's crust, located in the Mid-Atlantic Ridge. It thrives at temperature of superheated water with optimal temperature at 106ºC and will not grow below 90ºC. Its optimum pH is 5.5 and grew between 4.0 – 6.5 while salt concentration is between 1%-4% with 1.7% as its optimum. (Diversa 2001) 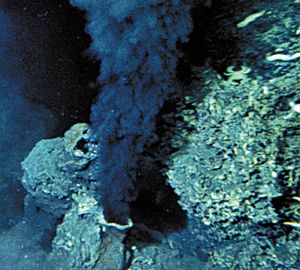