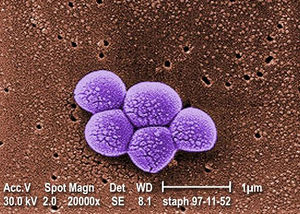 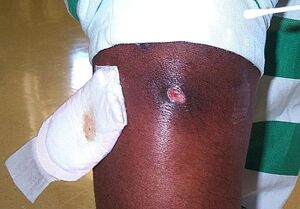 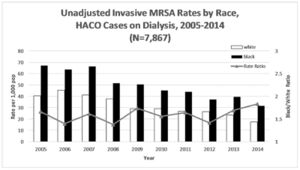 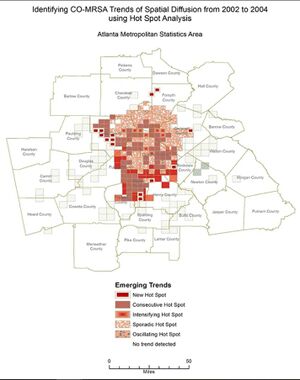 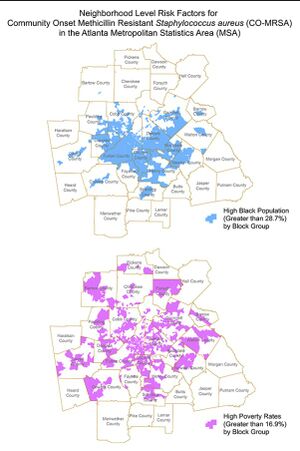 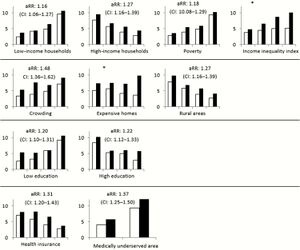 According to numerous studies as well as data from organizations such as the CDC, there are clear racial disparities in the incidence rates of MRSA infection in America. [15] [6] [7] In the cases of Hospital and Healthcare-acquired MRSA, these disparities have persisted despite overall declines in the number of MRSA cases nationally. [9] [7] [5] This signals that while efforts are being made to combat MRSA's prevalence in healthcare settings, nothing is being done to address the factors contributing to the disparities faced by Black Americans. [6] [7] In Figure 6, census data showing MRSA incidence of Black and White people of similar socioeconomic status (for specific categories) shows that when socioeconomic conditions are the same, the disparities between Black and White MRSA incidence rates are generally less drastic. [6] This lends credence to the notion that socioeconomic factors associated with race are a driving force between these inequities. [6] [16] Despite this, though, Black incidence rates for MRSA remain higher than those of White people even with similar socioeconomic factors at play. [6] A reason for this is that within the US, Black people that lack societal power and influence, live in urban areas and/or are below the poverty level in the USA are constantly challenged to access quality health care—free of discrimination. [16] Furthermore, these socioeconomic disadvantages and issues of inadequate healthcare access contribute to Black people having certain diseases and sicknesses at higher rates, which we now know places them at higher risk of MRSA infection as well. <ref name=ballukarirace> [13] In order for these racial disparities in incidence rates of MRSA infection to be quelled, there must be serious work done to ameliorate the pre-existing socio-economic disadvantages faced by Black people, as well as comprehensive reform to healthcare facilities such to eliminate the racial discrimination against that contributes to lower access to high-quality healthcare.