Difference between revisions of "Radiolaria" 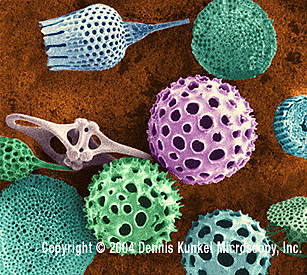 Radiolaria are planktonic protists. They are among the few protistan groups with comprehensive fossil records available for study. Radiolaria first appeared in the latter stages of the Pre-Cambrian period, one of the earliest microorganisms. It is believed that at first, these organisms only lived in shallow water. For the most part, Radiolaria are non-motile. The are mostly planktonic. Their name comes from the radial symmetry that their skeletons possess.

There are two major classifications of Radiolaria. The first, Polycystines, have simple skeletons that consist of simple opaline silica. The second, Phaeodarians, have more complex skeletons that consist of a siliceous composition. Phaeodarian skeletons are hollow, and are rarely preserved, as they dissolve in seawater. The Polycystines are further subdivided into Spumellaria, which have spherical shells, and Nassellaria, which have conical shells. Afanasieva et. al. (2005) have proposed a unification of these two classes, creating the superclass Polycystina. This superclass would be composed of six classes: Aculearia, Sphaerellaria, Spumellaria, Stauraxonaria, Nassellaria, and Collodaria.

Although genome research has been done on Radiolaria, there are many complications with it. For example, gene sequence variability is species dependent. Because of this, it is difficult to separated between species. Another complication is that genome structure differences can be illustrated in skeletal structure, but not always. This means that Genotypic variability is not necessarily correlated with Phenotypic variability. It is also difficult to study fossils of these organisms. In addition, genome studies are based on small samples of individual species, and it is unknown if these gene sequences are different in larger, more spread-out populations of the same species.

Radiolaria are unicellular organisms. They have mineral skeletons (tests) that are composed of silica. The tests are formed through the absorption of silicon compounds. This skeleton is covered with cytoplasm, which is withdrawn if the organism is disturbed. These skeletons do not meet at the center of the organism. Radiolaria also contain a central capsule which defines intracapsular and extracapsular regions. This capsule contains the nucleus, mitochondria, and Golgi bodies. It is also the site of reproduction. Radiolaria use pseudopodia such as rhizopodia and axopodia for capturing food. There are some species, however, that do not have these characteristics. For example, Collozoum inerme does not have the skeleton common to Radiolaria. Species in the Phaeodarian classification also have a mass of pigmented cells called phaeodium.

Radiolaria feed on phytoplankton, zooplankton, bacteria, and plant detritus. They are heterotrophic organisms.

Radiolaria live in marine environments. They can exist both as individuals or in colonies. There are no recorded benthic species. Instead, Radiolaria tend to be free-floating, planktic organisms. They act as both particle feeders and predators. Radiolaria species are most diverse at the equator, lowest at the poles. Radiolaria often form symbiotic relationships with algae and dinoflagellates.

Anderson OR. "Ultrastructure of a colonial radiolarian collozoum inerme and a cytochemical determination of the role of its zooxanthellae." Tissue Cell. 1976;8(2):195-208.