A Microbial Biorealm page on the genus Ralstonia eutropha 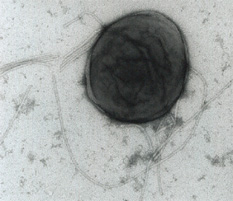 Photo courtesy of Dr. Bernardo Gonzalez and Danilo Perez-PantojaFrom The Regents of the University of California

Ralstonia eutropha can be found in both soil and water. This bacterium has great potential for use in bioremediation as it is able to degrade a great number of chlorinated aromatic (chloroaromatic) compounds and chemically related pollutants. R. eutropha H16 was formerly known as Alcaligenes eutrophus and was originally isolated from sludge. R. eutropha JMP 134 and other strains belonging to this species are models for studying microbial production of “polyhydroxyalkanoates (polyesters produced in nature by bacterial fermentation of sugar or lipids), and chemolithoautotrophic (organisms utilize inorganic compounds as energy sources) metabolism in aerobic heterotrophs.(JGI)”[1]

R. eutropha strains can utilize hydrogen, carbon dioxide and organic compounds for development and is a model organism for hydrogen oxidation because it can nurture on hydrogen as the sole energy source. R. eutropha JMP 134 was isolated due to its ability to degrade the herbicide 2,4-dichlorophenoxyacetic acid. The degradation abilities are encoded on a plasmid.

R. eutropha is Gram-negative bacterium and is non-spore forming. (Gram-negative means they have two membranes and have red or pink stain where as Gram-positive have only one membrane and have blue stain.) Many of the Gram-negative bacteria are pathogenic but this bacterium is not. They have motility and are facultative aerobes which can live in both aerobic and anaerobic environments. R. eutropha has two flagella and two membranes and are usually rod shape. R. eutropha JMP 134 have multiple habitats and Ralstonia eutropha H16 have a specialized habitat but both requires non-halophilic (not salty) environment. The optimal temperature is 30 degrees Celsius.

R. eutropha is able to degrade a large list of chloroaromatic compounds and chemically related pollutants. This bacteria can be used for the production of biodegradable thermoplastic by the characteristics of “polyhydroxyalkanoates (PHAs), and chemolithoautotrophic metabolism in aerobic heterotrophs.” Polyhydroxyalkanoates are a broad type of biodegrable polymer that can be used for biodegrable plastic. [1] R. eutropha is able to develop only with hydrogen and carbon dioxide as its only energy source and carbon source. When oxygen is not present it can use different metabolism to grow. It can obtain energy by denitrification anaerobically. As mentioned above this is why R. eutropha serves as a model organism for genetics and control of autotrophic carbon dioxide fixation and hydrogen fixation. R. eutropha also can metabolize heavy metals which makes it good candidate for studies into polymer production.

R. eutropha in general can be found in both soil and water. R. eutropha JMP134 lives in multiple habitats that are non-halophilic environments where as R. eutropha H16 lives in specialized habitat that is non-halophilic. R. eutropha does not require oxygen. Optimal temperature is 30 degree Celsius. R. eutropha thrives most successfully in the presence of millimolar concentrations of several heavy metal including Zinc, Cadmium, Cobalt, Lead, Mercury, Nickel and Chromium.

There is no known pathogen among different strains of Ralstonia eutropha.

This bacterium is able to degrade a large list of chloroaromatic compounds and chemically related pollutants. These species are models for study microbial production of polyhydroxyalkanoates and chemolithoautotrophic metabolism. Polyhydroxyalkanoates are a broad type of biodegrable polymer that can be used for biodegrable plastic. There is currently research about developing biodegrable plastics using R. eutropha H16’s capability to store large percent of poly[R-(–)-3-hydroxybutyrate] and other polyesters. There is another on-going research about protein purification using R. eutropha because it is about to produce its own “affinity matrix” [Research 4]. Its capability to develop on hydrogen only might help the future hydrogen based biotechnology for production of diverse, commercially, environmentally and medically valuable compounds, for example metabolites and polymers.

8.1 Integrated recombinant protein expression and purification platform based on Ralstonia eutropha - - Protein purification of recombinant proteins is very costly to do. Various ways are being develop to make it more efficient and less costly. This research paper talks about how protein purification can be obtained by using R. eutropha. In single step pure, active beta-galactosidase was obtained. This purification uses the advantage of “specific interaction of phasin proteins with granules of the intracellular polymer polyhydrosybutyrate (PHB)” in R. eutropha.

8.2 The R. eutropha H16 phasin PhaP1 is targeted to intracellular triacylglycerol inclusions in Rhodococcus opacus PD630 and Mycobacterium smegmatis mc2155, and provides an anchor to target other proteins - - The major phasin that binds to the surface of polyhydroxyalkanoates (PHA) is R. eutropha H16 phasin PhaP1. In this research they realized that PhaP1 was mainly located on the surface of intracellular triacylgycerol (TAG) inclusions and some at the plasma membrane. This is first reported incident where PhaP1 binding to lipid inclusions as well we PHA inclusions was demonstrated. And since this PhaP1 is non-specific, it can be utilized to mark other proteins.

8.4 Method for the continuous microbiological production of polyhydroxy butyric acid - - This article talks about the research of creating biodegradable plastic. Polyhydroxybutyric acid (PHB) is the gene that degenerate or degrades toxic objects. However plastics are still present instead of biodegradable plastics because their costs are definitely less. These researchers are trying to make more efficient and inexpensive ways to get PHB.

2. Process for the production of polyhydroxyoctanoate by streptomyces lividans [10]

3. Method for the continuous microbiological production of polyhydroxy butyric acid [11]

5. The Ralstonia eutropha H16 phasin PhaP1 is targeted to intracellular triacylglycerol inclusions in Rhodococcus opacus PD630 and Mycobacterium smegmatis mc2155, and provides an anchor to target other proteins [13]