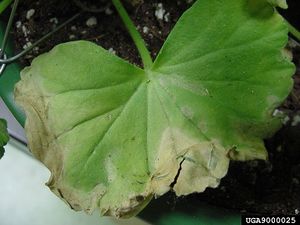 R. solanacearum genome is segregated into two circular molecules: a large replicon of 3,716,413 bp and a smaller 2,094,509-bp replicon, yielding a total genome size of 5,810,922 bp (5). The two molecules have an almost identical G+C content (67.04% and 66.86% for the large and small replicon, respectively)(5). The genome encodes many proteins potentially associated with pathogenicity. The complete genome sequence and its analysis of R. solanacearum strain GMI1000 shows that it possesses the 5.8-megabase (Mb) genome, which is organized into two replicons: a 3.7-Mb chromosome and a 2.1-Mb megaplasmid (5). The genes that are present on the megaplasmid suggests that this replicon has a significant function in overall fitness and adaptation of the bacterium to various environmental conditions (9). This validates that the megaplasmid carry all the information necessary for plant pathogenesis.

Ralstonia solanacearum is a Gram negative bacteria. It has an outer membrane and inner membrane. Its cell wall consists of peptidoglycan (6). The outer membrane allows more resistance to toxins that could damage the pathogen. Motility is accomplished by pili and flagella, allowing the invasion and colonization of the pathogens into their host. Once inside the host, they remain immobile (10).

R. solanacearum possesses hrp encoding the type III secretion system (T3SS), and its pathogenicity depends on interactions between the host plant and type III effectors (9). R. solanacearum invades intercellular spaces of roots through openings such as wounds then accumulates around the stele before breaking into and filling the xylem vessels (9). Upon invasion of the xylem vessels, the bacteria grow and travel rapidly to the upper parts of the plant. This results in extensive wilting because of reduced sap flow caused by the presence of a large number of bacteria cells and exopolysaccharide (EPS) slime produced by the bacteria in some xylem vessels (9). The main virulence factor of R. solanacearum is therefore thought to be EPS(9). 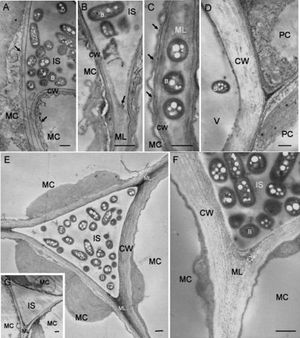 The proliferation of Ralstonia solanacearum in intercellular spaces is the quantitative determinant of its pathogenicity and is dependent on hrp genes. R. solanacearum secretes PopA, an extracellular Hrp protein and harpin, which contain high proportions of glycine and alanine (9). After proliferation in intercellular spaces, the bacteria systemically infect the host plants through xylem vessels and produce EPS, which is involved in quantitatively controlling virulence (9).

1) A current study was performed on Ralstonia solanacearum biovar 2 to study its survival in a variation of temperatures. The pathogen was recovered at low densities (10 to 80 CFU/ml) by direct plating on modified SMSA agar from water samples at 14°C or higher, but its isolation was usually unsuccessful at temperatures below 9°C (12). To study them in the winter, two liquid selective media for enrichment (at 29 and 35°C) were utilized and compared them by using spiked river water samples; Detection of R. solanacearum was carried out by a double-antibody-sandwich indirect enzyme-lined immunosorbent assay (DASI-ELISA) with modified Wilbrink broth (MWB) (12). The best detection results were obtained by the most-probable-number method after enrichment at 35°C with MWB (12). Overall, R. solanacearum is able to survive at low temperatures.

2) A recent study of Ralstonia solanacearum utilizing qualitative and quantitative chemotaxis assays revealed that this bacterium is specifically attracted to diverse amino acids and organic acids (13). R. solanacearum pathogens that lack flagellae and do not possess motility due to mutation is significantly reduced in virulence (13). Taxis makes its contribution to virulence in the early stages of host invasion and colonization because nontactic strains were as virulent as the wild-type strain was when bacteria were introduced directly into the plant stem (13). When inoculated individually by soaking the soil, both nontactic mutants reached the same population sizes as the wild type did in the stems of tomato plants just beginning to wilt. However, when tomato plants were coinoculated with a 1:1 mixture of a nontactic mutant and its wild-type parent, the wild-type strain outcompeted both nontactic mutants by 100-fold (13). These observations show that chemotaxis is an essential requirement for virulence and competitive, pathogenic fitness in Ralstonia solanacearum.