A Viral Biorealm page on the family Retroviridae 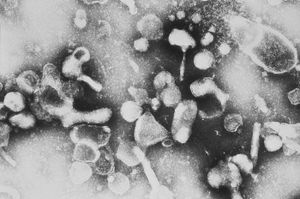 Electron micrograph image of Feline Leukemia Virus, a virus in the Retroviridae family. From the CDC.

Retroviruses are viruses that are remarkable for their use of reverse transcription of viral RNA into DNA during replication. Members of this family include Human immunodeficiency virus (the virus that causes AIDS), feline leukemia, and several cancer-causing viruses. Retroviruses were discovered in 1908 by Vilhelm Ellermann and Oluf Bang. The first sixty years of study of retroviruses focused exclusively on animal infection and disease. In the 1960s and 1970s, study focused on the viral replication cycle and pathogenic effects at the cellular level. Current study of retroviruses focuses on the diverse pathogenic effects of these viruses at the cellular and molecular levels. Retroviruses were the first viruses to be modified for gene therapy, and continue to be used in the majority of gene therapy clinical trials. (sources: Coffin et al., Hu and Pathak)

The genome of retroviridae is dimeric, unsegmented and contains a single molecule of linear. The genome is -RT and a positive-sense, single-stranded RNA. Minor species of non-genomic nucleic acid are also found in virions. The encapsidated nucleic acid is mainly of genomic origin but virions may also contain nucleic acid of host origin, including host RNA and fragments of host DNA believed to be incidental inclusions. The complete genome of one monomer is 7000-11000 nucleotides long. The 5'-end of the genome has a methylated nucleotide cap with a cap sequence type 1 m7G5ppp5'GmpNp. The 3'-terminus of each monomer has a poly (A) tract and the terminus has a tRNA-like structure. (source: ICTVdB)

Virion Structure of a Retroviridae

The virions of a retroviridae consist of an envelope, a nucleocapsid and a nucleoid. The virus capsid is enveloped. The virions are spherical to pleomorphic and measure 80-100 nm in diameter. The surface projections are small or distinctive glycoprotein spikes that cover the surface evenly. The projections are densely dispersed and 8 nm long. The nucleoid is concentric or eccentric while the core is spherical. (source: ICTVdB)

Reproduction Cycle of a Retroviridae in a Host Cell

Retrovirus virions enter host cells through interaction between a virally-encoded envelope protein and a cellular receptor. Viral RNA is transcribed into a DNA copy by the enzyme reverse transcriptase which is present in the virion. The viral DNA copy is integrated into, and becomes a permanent part of, the host genome. This integrated DNA is referred to as a provirus. The host cell's transcriptional and translational machinery expresses the viral genes. The host RNA polymerase II transcribes the provirus to create new viral RNA, which is then transported out of the nucleus by other cellular processes. A fraction of these new RNAs are spliced to allow expression of some genes, while others are left as full-length RNAs. Viral proteins are synthesized by the host cell's translational machinery. Virions are assembled and bud from the host cell.

This reproduction cycle applies to all of the members of Retroviridae except for spumaviruses. Spumaviruses complete reverse transcription in the virus-producing cells rather than infected target cells, and the infectious virus contains a DNA genome. (source: Hu and Pathak)

Retroviruses cause a wide variety of malignancies, immunodeficiencies, and neurological disorders affecting a wide variety of species. According to Coffin et al., "Some of these disorders have significant agricultural impact, crippling farm animals during their most productive years, whereas others have a devastating medical and economic impact on humans. Still others, particularly many of the retrovirus-induced malignancies of rodents, were found originally in laboratory settings and provide excellent model systems for probing the biological and molecular mechanisms of carcinogenesis." (source: Coffin et al.)

The failure of 'classical' vaccines to induce protection to the most important of all retroviruses, HIV, has led to the development of a huge variety of 'molecular vaccines', i.e. vaccines produced using modern molecular biological techniques. Such vaccines range from simple plasmid DNA coding for the genes of choice, through recombinant viruses carrying such genes to engineered bacteria designed to deliver HIV genes to the mucosal immune system. Evaluation of such vaccines in animal models has resulted in sporadic successes and many failures and the few human clinical trials have been, at best, negative. However, the relative success of molecular vaccines in combating other retroviral infections and the continuing refinement of HIV/SIV vaccines showing some efficacy suggests that a molecular AIDS vaccine may be achievable. (source: Kurth and Bannert)