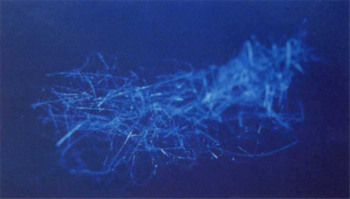 Figure: a diatom mat of Rhizosolenia, roughly 3 cm across.[1]

Rhizosolenia was discovered in 1843 floating in large very delicate mats in oceans of warm latitudes. Rhizosolenia is a cylindrical diatom with a silica shell. Rhizosolenia species can be found in marine and brackish water. Some species are also found in sediments. Rhizosolenia plays a significant role in the carbon, silica and nitrogen cycles in the oligotrophic seas.

The increases of some species of Rhizosolenia are responsible for lowering the numbers of good phytoplankton in certain seas due to competition of nutrients. Rhizosolenia can also cause fish kills by clogging the gills with their hard silica exterior and from post-bloom anoxia. At the same time, live and dead cells of Rhizosolenia are used by bacteria and benthic animals for nutrients. Invertebrates cannot use them directly for nutrients because of the morphological structure of the cells.

There has not been a genome project on Rhizosolenia spp. at this time.

Rhizosolenia is a unicellular rod shaped diatom and ranges in diameter size from 2.5-170 µm. The cell wall is made of a silica shell comprised of two separate valves, also known as a frustule. The cell can synthesize the biogenic silica needed for the construction of the frustules. Rhizosolenia reproduces asexually by dividing the frustule in half. With each asexual reproduction the cells are reduced in size until it undergoes sexual reproduction. After sexual reproduction, the original size of the Rhizosolenia is re-established and the process begins again. Reproduction time depends on the nutrients and silicon availability which can be 0.5-9.8 days. Rhizosolenia is mostly abundant in a mat formation containing communities of multiple Rhizosolenia species. The mats can be comprised of short chains of only a few cells or larger rigid chains ranging from 1-30cm wide.

The size of the large mat communities can be a disadvantage in survival when competing with nano and pico sized organisms in an oligotrophic aquatic environment. To overcome this disadvantage, Rhizosolenia mats photosynthesize at the surface and then undergo a vertical migration (>300m) to exploit nutrients. With the increase of carbohydrates in the cell from photosynthesis the cell becomes negatively buoyant and has a downward migration. As the carbohydrates are consumed and there is an uptake of nitrate a positively buoyant upward vertical migration takes place. The migration process can take 3.4-5.4 days. Nitrate uptake from Rhizosolenia mats is stored in internal pools. The nitrogen maybe utilized by the mats, released into surrounding waters as a way to dissipate excess energy or relieve stress, or to be remineralized by macro and microzooplankton. The excretion of nitrogen from Rhizosolenia can be in the forms on nitrate, nitrite and ammonium which all play an important role in the nitrogen cycle at the oceans photic zone.

Rhizosolenia species are found in marine and brackish water and are known to be a eurythermic species. Their geographic distribution is usually restricted to lower latitudes with warmer temperatures. However with globally increasing temperatures they are becoming more common in areas where 50 years ago they may have never been seen. Rhizosolenia migrate up to 300 m depths in order to get nutrients. Some of the nutrients are excreted in the photic zones of the oligotrophic seas and can be used by other aquatic organisms.

9-13 percent of the global silica production is from Rhizosolenia. Unlike nitrate, silicon metabolism is not linked to the migration of Rhizosolenia. Rhizosolenia species are known to form huge blooms of 400000 cells/L between May and June in the English Channel and in the Bay of Brest when silicic acid concentratrations are low. Several studies results show that ambient silicic acid is an important factor for shaping the diatom succession in temperate coastal ecosystems. This has helped understand the link between silicic acid availability, diatom blooms and coastal eutrophication.

There is no direct symbiosis with any other organism known even with Rhizosolenia's contributions to the environment in cycling new sources of nitrogen, silica, and carbon in the photic zones of the oligotrophic oceans. In addition Rhizosolenia has no pathogenic tendency, however, there is a RNA virus that infects Rhizosolenia setigera (RsTNAV).