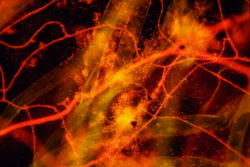 The rhizoplane is the root epidermis and outer cortex where soil particles, bacteria and fungal hyphae adhere (Singer, 2006; Sylvia, 2005). The functional definition is the remaining microorganisms and soil particles after the roots have been shaken vigorously in water. There are more microbes in the rhizoplane than in the more loosely assoicated rhizosphere. This is determined by counting the number of colony forming units (CFUs) which are determined by spreading extracted soil microorganisms across an agar and counting the number of independent clusters of microorganisms. Microbes are most abundant where the integrety of the root is compromised. For this reason, rhizoplane microorganisms tend to be found on older rather than younger roots. Bacteria and fungi that live within the cells of the root are not considered a part of the rhizoplane, but instead called endophytes (Sylvia, 2005).

The plant roots which the rhizosphere is associated with can effect the physical environment of the rhizosphere. As plants transpire water with more force during the day than during the night, they change the soil water potential immediately near their roots and so the rhizosphere undergoes fluctuations that the bulk soil avoids.

Movement of organic matter away from the root as well as bacteria colonizing new locations occurs more readily in sandy soils than clayey soils. Sand has larger pores between each granule allowing microorganisms and exudates can travel. Therefore, the larger the granule size, the further the rhizosphere and microorganisms associated with it will extend into the surrounding soil. (Sylvia, 2005)

Plant roots compact the soil on the short term as they grow, but once they die and decay, can actually leave soil more porous.

Several factors can lower the pH in the rhizosphere. Respiration leads to carbon dioxide (and eventually to bicarbonate/carbonic acid) generation. In addition to respiration of the roots themselves, the rhizosphere is very rich in carbon results in other organisms from prokaryotes to fungi to small animals living and respiring in the rhizosphere more than in the bulk soil.

The availible habitat that microbes are limited in part by pH of the soil. Fungi are found in more acidic soils than alkaline, and bacteria have a very broad pH spectrum where they can survive. The influincing effects of pH in the rhizosphere is critical in supporting a biologically diverse microbial community.

Plant-derived compounds are responsible for providing the additional carbon that allows the rhizosphere to host a large variety of organisms. These compounds fall into five categories: exudates, secretions, mucilages, mucigel, and lysates.

Exudates include surplus sugars, amino acids, and aeromatics that diffuse out of cells to the intercellular space and surrounding soil. Due to their diffusive nature, exudates are limited to compounds of low molecular weights. Secretions are byproducts of metabolic activity. Because they are actively released from the cell, secretions can be of both low and high molecular weight. When an epidermal root cell dies and is broken open, lysates from within the cell become available to the surrounding microbial community.

Mucilages are cells sloughed off the root cap as the root grows. Abrasive forces of the root against soil particulate matter is responsible for the removal of cells. These cells consist of cellulose, pectin, starch, and lignin. Mucigel is a slime coating the surface of a root that increases the connectivity between plant roots and the surrounding soil. It is more common on the main body of the root and root hairs than the tip. During dry spells, mucigels are responsible for allowing plants to continue to uptake water and nutrients. (Sylvia, 2005) 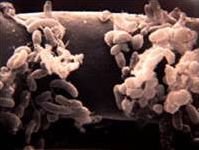 Bacteria are the most numerous organisms in the soil, averaging between 10^6 to 10^9 organisms per gram of rhizosphere soil. Due to their small mass, they only account for a small amount of the biomass of soil. Nonsporulating rods, pseudomonads, and acetinomycetes are the most common bacteria in the soil. (Sylvia, 2005)

Both pathogenic and symbiotic fungi associate with the rhizosphere. They average between 10^5 and 10^6 organisms per gram of rhizosphere soil. Zygomycetes and hyphomycetes establish the most readily in the rhizosphere because they metabolize simple sugars. (Sylvia, 2005)

In times of flooding, when too much moisture accumulates around the base of the tree, a bacterial pathogen Armillaria may infect and cause root rot.

Biotic Interactions in the Rhizosphere

Up to 15% of the root surface area is covered with rhizosphere-specific microorganisms - providing many sites for biological interactions. A range of interactions are present in the rhizosphere: from beneficial symbiotic relationships to detrimental pathogenic interactions. (Sylvia, 2005)

Microorganisms in the rhizosphere complete both chemical and physical modifications to the soil profile in and around the rhizosphere that affect plants. They can be beneficial to the plant (by pathogen suppression) or detrimental (by competition for nutrients).

Chemical changes occur as a result of humification of organic matter. The resultant mineralization of various organic compounds (phosphorous, sulfur, and nitrogen, for example) provides plants with forms of nutrition that are readily available for uptake. The turnover of microbial populations also results in the release of nutrients. The fixation of atmospheric dinitrogen by both asymbiotic and symbiotic bacteria results in increases to the available nitrogen pool that can be accessed by plants in and near the rhizosphere. Symbiotic mycorrhizae cause an increase in the effective rooting area of plants, thereby providing added nutrient mining capabilities to the plant. Rhizosphere microbes can also release plant growth regulators.

Physical changes occur primarily through the production of extracellular polymeric substances such as polysaccharides and glomalin, which improve soil aggregation and soil texture. The presence of mucigel in the rhizoplane is crucial to the water relations of plants, providing a bridge that prevents dessication by maintaining the water column during water stress events. (Sylvia, 2005)

Plants can also compete with rhizosphere microorganisms for resources like water and nutrients. (Sylvia, 2005)

In a relationship, the plant usually provides a source of carbon and the bacteria or fungus fills some other more specialized function. In many cases the association is not absolutely necessary for the survival of both members, but provides significant benefit.

The recently sequenced genome of Laccaria Bicolor (an ectomycorrhizal fungus) shows a excess of enzymes used in ammonia uptake, and a lack of enzymes that would be needed to degrade plant wall material. Thus, it is assumed the fungus is providing nitrogen (and perhaps other nutrients), and a guarantee not to attack to the tree in return for glucose. (Martin, 2008). As described below, fungi are also often an important source of phosphorous.

The microbial partner can also help the plant to survive in an otherwise inhospitable environment. For example, specific endophytes have been shown to confer heat resistance to grasses that grow in a hydrothermal area, or salt tolerance to costal grasses. (Rodreguez, 2008)

Over 80 percent of all land plants have a mutualistic relationship with one or more mycorrhizal fungi. Mycorrhizal fungi extend the effective root length by 100 fold or more. It would therefore seem appropiate that mycorrhiza means fungus-root in German. Not only do they increase the surface area over which nutrients and water can be taken up by the plant, but fungal hyphae can reach into smaller pores than roots can. The most valuable asset mycorrhizae provide is accessing immobile nutrients, such as phospherous. In return, the plant passes a significant amount of its carbon reserves to the fungi. (Sylvia, 2005)

Ectomycorrhizae Reference to Source of Image

Ectomycorrhizae interact with the plant root by producing a net-like structure called a Hartig net that weaves between the root cortical cells. A sheath or mantle of fungal tissue covering part or all of the root is responsible for most of the increase in surface area caused by mycorrhiaze. Some fungi, such as Boletus betulicola, have only a narrow range of plants they can associate with. Other fungi have a much larger range of host plants. One such fungus, Pisolithus tinctorius, associates with 46 tree species and eight genera. (Sylvia, 2005)

Image of Arbuscular MycorrhizaeReference to Source of Image

Arbuscular mycorrhiza is also referred to as endomycorrhiza because it has a branched arbuscule that grows within the root cortical cell. Direct connection between the plant and fungal cytoplasm allows the transfer of nutrients from the fungi to the plant and carbon from the plant to the fungi to be more efficient. Examples of mycorrhizal fungi include Glomus tenue and Scutellospora. (Sylvia, 2005) 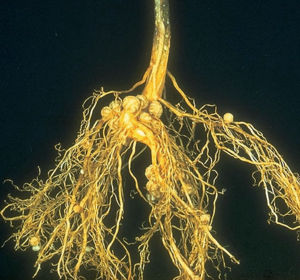 Image of N cycle Reference to Source of Image

Due to the high energetic cost of fixing dinitrogen, a significant part of nitrogen fixation occurs near the plant roots, where there is an influx of sugar to power the process. Some nitrogen fixation occurs in the rizosphere by free-living bacteria (the ability is found only in prokaryotes). When these otherwise free living bacteria form a close association with a plant they’re called “associative symbiotes”. An example of a free living nitrogen fixer is Azotobacter.

There are several drawbacks to this lifestyle: 1. Nitrogen fixing bacteria are sensitive to fluxuations in oxygen. Many are aerobes who use oxygen as a terminal electron acceptor, but on the other hand, oxygen can poison the nitrogenase enzyme. Hence free-living bacteria need to take energetically costly steps such as having extremely fast respiration or producing large amounts slime to protect nitrogenase. Another disadvantage Associative symbiotes have do deal with is that they are in direct competition with the rest of the rizosphere for the available carbon. Experiments indicate that carbon is a limiting factor in rhizosphere nitrogen fixation.

An alternate form of nitrogen-fixing lifestyle is to actually live in the plant root cells themselves. Bacteria who do this are called ”symbiotes” or “mutualistic symbiotes”, and an example of one such bacteria is Rhizobia. These bacteria form “nodules” on plants, which are huge masses of bacteria living inside plant cells which have been modified for the purpose. The process of forming a nodule requires recognition between bacteria and plant (usually very specific), and gene expression changes in both players. The plant provides carbon to the bacteria and the bacteria provide fixed nitrogen to the plant. The masses of bacteria produce leghemoglobin to protect nitrogenase from oxygen, and do not have to compete with other rhizosphere microbes for carbon (Sylvia, 2005).

Inoculation of fields with the soil from other fields has been practiced for centuries as a method of inoculation. Modern seed companies are dipping seeds in beneficial inoculants before sale. However, the specific conditions surrounding the seed at germination and the specific soil characteristics determining the ability of the soil to support a population of desirable rhizosphere microbes will be the ultimate determinants in the successful colonization of the desired inoculant. Carriers of inoculants are also being explored, such as peat and other potting media. The primary organisms being used for these products are mycorrhizal fungi, dinitrogen-fixing bacteria, and beneficial rhizobacteria. Some work has explored the possibility of using biological control organisms as inoculants on seeds or seedlings. (Sylvia, 2005)

A partial list rhizosphere microorganisms that have been used as inoculatns: