Difference between revisions of "Rhodanobacter denitrificans" 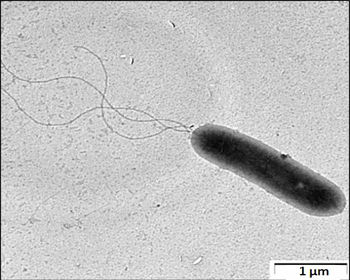 Rhodanobacter denitrificans is a yellow-pigmented, gram-negative, non-sporulating, motile,slow-growing, and facultatively anaerobic rod-shaped bacterium with the ability to perform complete denitrification [8]. For Rhodanobacter species, denitrification was not a characteristic until the discovery of R. denitrificans [6]. Denitrification is the conversion of nitrate to N2 through nitrite, nitric and nitrous oxide intermediates catalyzed by microbial enzymes [11]. Only two species of Rhodanobacter, one of them being Rhodanobacter denitrificans, is capable of this process [8]. In the absence of oxygen, growth is fueled by the use of nitrate, nitrite, and nitrous oxide as electron acceptors [8]. Rhodanobacter denitrificans has a salt tolerance up to 2% NaCl [8]. Growth was observed at pH 4-8 and 10-35ºC, optimally at pH 6.5 and 30ºC [8]. The two strains of R. denitrificans, 2APBS1 and 116-2, were found at Oak Ridge Integrated Field Research Challenge (ORIFRC) [8]. ORIFRC is a model nuclear legacy site with high levels of nitrate and acidity, with uranium and other heavy metal contaminants [8]. At ORIFRC, 2APBS1 was isolated from Area 2 (pH 6-7 and nitrate level <2 mM) and 116-2 was isolated from Area 3 (pH 3-4 and nitrate level 10s to 100s mM) [8]. The two strains are highly abundant and active in acidic, nitrate rich subsurface environments with high metal (e.g. uranium) concentrations [8]. The characteristic of survival in these harsh environments allow R. denitrificans to conduct bioremediation of the contamination sites by denitrification [8].

Microbes can reduce contaminants in the subsurface ecosystem, such as in ORIFRC [5]. Nitrate concentration is inversely proportional to pH [11]. High levels of nitrate inhibits most microbes, but R. denitrificans can thrive in a nitrate rich environment conducting denitrification, which is important in subsurface ecology [5]. Low pH, high nitrate, and other co-contaminants cause strong selective pressure on the bacterial community [5]. Selection minimizes microbial diversity and leads to the survival of dominant species such as R. denitrificans [1]. pH is the strongest determination factor of abundance for Rhodanobacter [5]. Rhodanobacter thrives in conditions of high nitrate and uranium, and low pH [5]. Also, electron donors are the limiting factors of denitrification; nitrate levels exceed the number of electron donors [5]. The deaths of other native bacteria in the acidic subsurface led to favoring of horizontal gene transfers, giving complete denitrification capability and acid tolerance to R. denitrificans [5]. R. denitrificans also have a flexible metabolism and able to grow on many organic substrates [5]. They grow extremely well on acetate (great carbon source and electron donor), used to stimulate denitrification and neutralize liquid waste at ORIFRC [5]. All in all, low pH groundwater and high nitrate levels created a specific niche for Rhodanobacter denitrificans [5].

Bioremediation is a cost effective process that microbes use to remove pollutants from the environment by enzymatically transforming the contaminants [2]. It is a natural solution to health and ecological impacts, and leads to nontoxic end-products such as N2 and precipitation of metals contaminants [2]. Contamination of aquifers is a major problem because clean water is an important resource for agriculture and industry [2]. For many countries, groundwater is a major source of drinking water [2]. Nitrate is one of the most widespread groundwater contaminants [2]. In ORIFRC, nitrate contamination is accompanied with uranium, which has no function biologically and is toxic to most bacteria and humans [12]. It has two oxidation states, one being the soluble U(VI) uranyl ion and the other is extremely insoluble U(IV) precipitate [12]. Uranium contamination is associated with the production of nuclear weapons, and is widespread across the world [1]. The growth of R. denitrificans at low pH is important because uranyl ion exists in the most toxic form at low pH [12]. Reductive immobilization of U(VI) is a currently favoured bioremediation process [9]. U(VI) contaminates aquifers and drinking water rapidly [9]. Nitrate is a competitive electron acceptor in the subsurface so U(VI) reduction is inhibited by its presence, and the ORIFRC research operation is used to test this correlation [11]. Therefore, uranium precipitation is most efficient when nitrate is depleted [10]. Rhodanobacter denitrificans effectively reduces nitrate in environments with low pH and high levels of nitrate and heavy metals. In ORIFRC, bioremediation of aquifers co-contaminated with nitrate and uranium can be stimulated by adding organic electron donors such as acetate [11]. Acetate facilitates the removal of U(VI) from contaminated aquifers [9], by U(VI) reduction which is strictly a biological reaction by microbes [3]. R. denitrificans are also able to reduce the emission of N2O from low pH soils, which is a strong greenhouse gas and a denitrification intermediate that depletes ozone and causes global warming [13]. This is due to their capability to undergo complete denitrification, therefore reducing nitrate and other harmful intermediates to N2 which is released into air [13].

The complete genome of R. denitrificans 2APBS1 is 4.23 Mb and 116-2 is 3.98 Mb [8]. 2APBS1 strain contains nitrate, nitrite, nitric oxide, and nitrous oxide reductase genes [4]. Comparing 16S rRNA gene sequences, the two strains have high sequence similarity to R. thiooxydans LCS2; 99.2% match for 2APBS1 and 98.7% match for 116-2 [8]. LCS2 is a thiosulfate-oxidizing bacterium with almost the same phenotype as Rhodanobacter denitrificans [7]. However, nitrate is reduced, but nitrite is not for this bacterium [7]. The highest rRNA sequence similarity is between the two strains, with a 99.4% match [8]. Using DNA-DNA hybridization, results show that 2APBS1 has the highest DNA similarity of 86% to 116-2, whereas the next two closest only have 56.7% (R. soli) and 41.1% (R. thiooxydans) similarity [8]. Overall, knowing that the DNA-DNA hybridization threshold is 70% for determining species, and with the genus-unique capability of denitrification, the two strains represent a novel species of Rhodanobacter with the proposed name Rhodanobacter denitrificans [8].