Difference between revisions of "Rhodococcus rhodochrous" 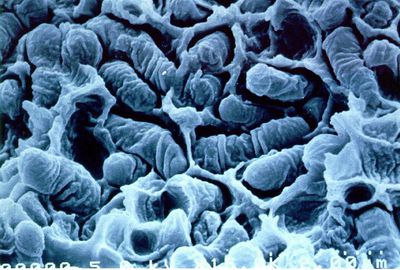 Rhodococcus rhodochrous is a species of aerobic, gram positive, and nonmotile bacteria [1]. The classification of genus Rhodococcus is mainly based on its distinctive composition of mycolic acids in the cell wall [2]. Members of the genus Rhodococcus inhabit in diverse niches and some of the strains cause pathogenesis in plants and mammals [2]. The species, Rhodococcus rhodochrous, is usually isolated from contaminated soil which does not contribute to any pathogenesis [2]. Many strains of Rhodococcus are considered as significant part of the soil microbial community because of their diverse biodegradation mechanisms [1]. Moreover, several strains of Rhodococcus are exploited in industrial production or pollutants degradation [3][10]. For example, Rhodococcus rhodochrous strain 11Y is isolated from explosives-contaminated land, which uses RDX as a sole nitrogen source for growth [10]. More examples of industrial usefulness of R. rhodochrous will be discussed in biotransformation section. 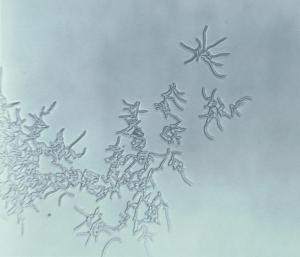 R. rhodochrous has a diverse array of organic compound degradation capabilities, which is contributed by its large genome size [2]. They store a massive number of catabolic or biodegraditive genes in their large linear plasmids[2]. Due to Rhodococcus’ diverse ability to biodegrade, revealing their commercial potential, attention to these bacteria has generally increased in scientific research; however, still very limited information about the their genome is known [2][3]. Recent research has shown that their genome size may be up to 9.7Mbp [2]. This is a relative sizable genome size compared too other bacteria. A larger genome size contributes to a greater capacity or diversity in catabolic enzymes and pathways to the organism. Moreover, the bacteria also have multiple smaller circular plasmids and large linear plasmids which further increase their substrate diversity and genome size variability [2].

Phylogeny and History of Rhodococcus Classification

By analysis of 16SrDNA sequences, Rhodococcus is known to be closely related Corynebacterium, Nocardia, and Mycobacterium [3]. Historically, classification of the genus Rhodococcus had been an impending task until recent years [2]. The difficulty of the classification can be contributed from both the genomics and morphology of the genus. The genomic difficulty is related to its genetic instability which is caused the high frequency of recombination [2]. Although Rhodococcus genomes are composed of many linear plasmids, not many transposition events have been observed; however, studies have shown that non-homologous recombination can occur in Rhodococcus fascians DNA [2]. It is suggested that Rhodococci DNA undergoes recombination easily with heterologous sequences which may as the reason for their genomic instability. Moreover, the immense genetic diversity also makes the selection of representative strains more difficult [8]. On the other hand, the morphology of the genus also gives the raise of classification problem; pleomorphism was one of the main problems for classification of Rhodococcus. Rhodococcus that are in exponential phase of growth exhibit filament or short rods morphology while those are in stationary phase tend to be in cocci [8]. Hence, the pleomorphism raises the problem because mutant may not being segregated during selection process [8]. Other than pleomorphism, Rhodococcus also shares many common features with Streptomycetes [8]. Rhodococcus also has recalcitrant cell walls, which make nucleic acids extraction difficult [2]. Although the technique of 16S ribosomal RNA sequencing has aids the systematics of Rhodococcus, the sequencing suggest that the genus is still heterogeneous; further studies of the classification methods are required [2] [7]. 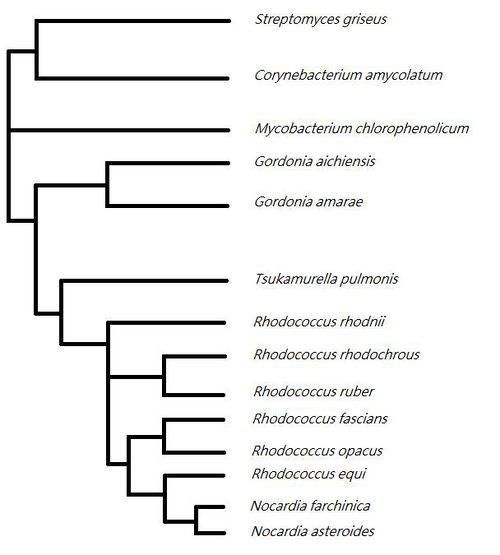 All strains of Rhodococcus begin their life cycle as coccus or short rod shape [9]. Upon the course of growth, their morphology change into various forms; short rods, filaments, and hyphae [9]. When reaching the end of exponential growth stage, formation of new generation occurs via fragmentation of the matured individuals [9]. Rhodococci are capable of using a wide range of organic compounds as sole sources of carbon and energy to support their growth [9].