Difference between revisions of "Rhodophyta"

A Microbial Biorealm page on the Rhodophyta

There are between 2,500 and 6,000 species of Rhodophyta; it is a moderately diverse classification. They are an ancient group of organisms; fossil records place them in the mid-proterozoic. It is believed that Rhodophyta were among the first multicellular organisms. In their research on single-celled apicomplexan parasites, Coppin et. al. (2005) show evidence that Toxoplasma gondii shares ancestry with red algae, possibly by ingesting it as an endosymbiont. Their evidence suggests that the two organisms evolved from cells with similar UDP-glucose-based metabolisms.

There are many different species within Rhodophyta, and all have different genome structures. The first plasmid genome from Rhodophyta that was sequenced was the species Gracilaria tenuistipitata var. liui. The sequencing was completed by Hagopian et. al. (2004). They found that this plasmid contained 238 predicted genes, as well as a copy of the ribosomal RNA operon. They noted that this species maintains an ancient gene content.

Most Rhodophyta are multicellular organisms, although a few are unicellular or colonial. Rhodophyta are pigmented with phycoerythrin, phycocyanin and allophycocyanins. These pigments are found in phycobilisomes. Rhydophyta do not have any flagella or centrioles. Nor do they have chloroplast endoplasmic reticulum. Rhodophyta have unstacked thylakoids in plastids. Some species have pit connections between cells. In their research on cell wall composition on certain species of Rhodophyta, Youngs et. al. (1998) found that the cell walls of freshwater organism Bostrychia moritziana were highly adaptive to osmotic and ionic changes in their environment. They believe this adaptation is partially facilitated through changes in cell wall chemistry.

Rhodophyta are autotrophic, obtaining and storing floridian starch from photosynthesis.

Rhodophyta tend to reproduce sexually. Life cycles tend to be diplohaplontic, with alternation between haploid and diploid stages. However, this is not the case with all species. Porphyra nereocystis, for example, has a heteromorphic alternation of generations. Sexual reproduction is oogamous; it involves non-motile spermatia and closed mitosis. Tetraspores are produced in the tetrasporangia during meiosis. If asexual reproduction occurs, it does so through aplanospores. 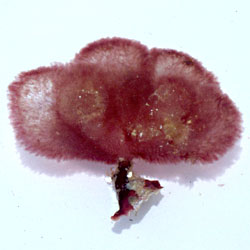 Rhodophyta are aquatic organisms that exist in both freshwater and marine habitats, although mostly marine. They are found in tropical, temperate, and cold-water environments. Rhodophyta tend to live at greater depths of water than Charophyta and Chlorophyta. This is because Rhodophyta pigments absorb blue light, which penetrates water to a greater depth than other wavelengths. Rhodophyta are primary producers. They provide habitats for other aquatic organisms. In addition, Rhodophyta play an important part in the establishment and maintenance of coral reefs. Those species found in coral reefs are called coralline algae; they secrete a shell of carbonite around themselves.

Rhodophyta are also farmed and harvested for use in food and gels. Sheets of red algae are toasted and used to wrap sushi. Rhodophyta are also used to make nori. Dried nori can be eaten alone, or used in sushi. Rodophyta are rich in protein and vitamins, which makes them especially useful for food. Cultivation of Rhodophyta is a fairly simple process which began in Japan over 300 years ago.

One of the ways in which Rhodophyta have to adapt to their aquatic environments is in terms of wave action. Previous research suggested that Rhodophyta are constant in strength when it comes to facing the drag caused by waves. In their examination of Mastocarpus papillatus, Kitzes and Denny (2005) showed that these responses are not uniform. Mastocarpus papillatus groups react based on whether or not their sites are exposed or protected. Rhodophyta do not all behave the same way; instead, they adjust their responses based on the immediate conditions of their environment.

Rhodophyta have medical purposes. Turhani et. al. (2005) studied hydroxyapatite ceramic granule, which was calcified from red algae, to see if it would have potential for bone tissue engineering. Their objective was to determine whether or not living cells would grow on the granule. The results of their experiment showed that the cells had high viability, meaning that this compound has capabilities for bone engineering. In addition, Rhodophyta are useful for the study of metabolic pathways, cell biological processes, and genetics. One species that is particularly useful for research is Galdieria sulphuraria because of its metabolic versatility. 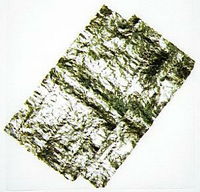 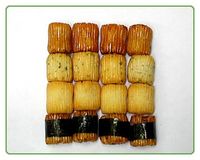 A mix of sushi and nori. Thai-Nichi Industries Company Limited.

Waggoner, Ben and Brian Speer. Introduction to the Rhodophyta.