Difference between revisions of "Rhodopseudomonas"

A Microbial Biorealm page on the genus Rhodopseudomonas

Rhodopseudomonas bacteria are purple nonsulfur phototrophic organisms that can be found many types of marine environments and soils. It converts sunlight into energy and converts atmospheric carbon dioxide into biomass. R. palustris has the potential to be very useful because it can degrade and recycle several different aromatic compounds that make up lignin, the "main constituent of wood and the second most abundant polymer on earth" (DOE). Thus, this bacteria and those like it may be useful in removing these types of waste from the environment. In addition, R. palustris converts N2 into NH4 and H2, which can be used as a biofuel.

Rhodopseudomonas palustris, whose genome has been sequenced by the DOE Joint Genome Institute, has a certain genetic system that allows genes to be moved in and out of the bacterium easily. This allows researchers to target certain genes for mutagenesis and "rapidly apply information gained from genome sequencing to the developing area of functional genomics" (DOE). The genome, which is 5.46 Mb in length and is comprised of 4,836 predicted genes (its plasmid being 8,427 bp), encodes for proteins involved in a versatile and flexible metabolism as well as a cellular differentiation and a budding reproduction. It is similar to the genome of Bradyrhizobium japonicum including many homologous genes, such as terminal oxidase genes.

Rhodopseudomonas bacteria have a photosynthetic reaction center containing bacteriochlorophyll b that was first found in 1963 and classified 3 years later and have a range of metabolic processes (Lang and Oesterhelt 1989). R. viridis is an anaerobic, photosynthetic bacterium that has microaerophilic growth capacity. It is one of the most metabolically versatile bacteria known with the ability to convert carbon dioxide gas into cell mass and nitrogen gas into ammonia and hydrogen gas. R. palustris has an interesting reproduction through budding and asymmetric cell division: one daughter cell is a motile swarmer cell and the other is a stalked nonmotile cell. Another major developmental process of R. palustris is the differentiation of "an elaborate system of intracytoplasmic membrane vesicles when cells run out of oxygen and are placed in light" (DOE). These intracytoplasmic membranes, which are named thylakoids, contain the photosynthetic reaction centers and occur only in anaerobic conditions. The thylakoids are integral membrane protein-reaction center complexes that catalyze light-induced electron transport through the photosynthetic membrane. (Lang and Oesterhelt 1989) They also house photosynthetic pigments and associated proteins (DOE). Also during anaerobic conditions, R. palustris increases its biomass by absorbing carbon dioxide and "degrading organic compounds including such toxic compounds as 3-chlorobenzoateto cellular building blocks" (DOE). When oxygen is available, the bacterium degrades several types of carbon-containing compounds like sugars, lignin, monomers, and methanol through respiration (DOE). 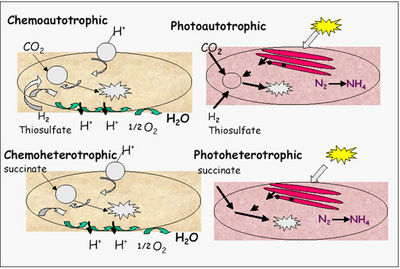 Metabolic processes of R. palustris. From Center for Bioinformatcs and Computational Genomics.

Studies have shown that Rhodopseudomonas viridis grows well at 30°C in light under at a 13 hour generation and under microaerophilic growth conditions in the dark at a 24 hour generation time. In addition, the bacterium did not grow anaerobically in the darkness or aerobically in the light. The bacterium was able to use dimethyl sulfoxide, potassium nitrate, or sodium nitrite as a terminal electron acceptor instead of oxygen. (Lang and Oesterhelt 1989) In general, this bacterium can be found in many different soils and marine environments.

Rhodopseudomonas palustris, along with Rhodospirillum rubrum and Rhodospirillum photometricum, grow phototrophically on several two- and three-carbon halocarboxylic acids in the presence of CO2 through reductive dehalogenation and assimilation of the resulting acid. This ability to utilize halocarboxylic acids suggests that they might be able to assist in the removal of these environmental pollutants from illuminated anaerobic habitats like lakes, waste lagoons, sediments of ditches and ponds, mud, and moist soil (McGrath and Harfoot 1997). This bacterium also has the ability to convert N2 into NH4 and H2, which can be used as a biofuel.