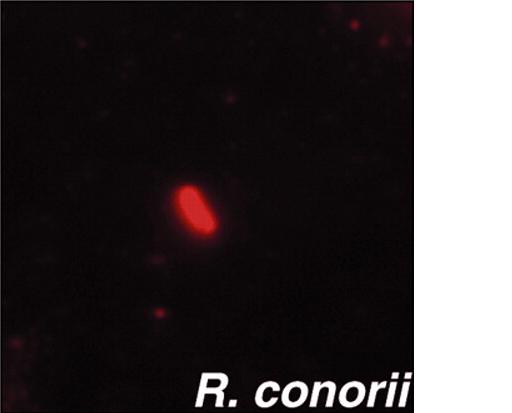 The genome of Rickettsia conorii is 1,268,755 base pairs in length and contains 1374 protein-coding genes. In anaerobic glycolysis, there are no genes in the biosynthesis and regulation of amino acids and no genes in the nucleosides of free-living bacteria. Rickettsia are intracellular small gram-negative proteobacteria in a subdivision associated with different arthropod hosts. The genomes and the mitochondria of Rickettsia are small, highly derived, "products of several types of reductive evolution" (Andersson et al. 1998). The R. conorii genome sequence relates closely with its relative Rickettsia prowazekii shows a new type of "coding" mobile element (Rickettsia-specific palindromic element, RPE)mostly found inserted in frame within open reading frames (ORFs). All bacterial palindromic repeats appeared exclusively in noncoding regions. There are 656 interspersed repeated sequences in 10 distinct families. Among the 10 families, three palindromic sequence families showed clear cases of insertions into open reading frames (ORFs). The in-frame insertion located to be compatible with three dimentional encoded protein.