A Microbial Biorealm page on the genus Rickettsia rickettsii 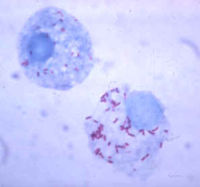 Infection with Rickettsia rickettsii also triggers an active response that alters cellular phenotypes. There is an increase in the secretion of cytokines and proteins. During Rickettsia rickettsii infection, nuclear factor-kappa B (NF-KB) is activated. This is a group of transcription factors that regulate cell adhesion, proliferation, the immune system, inflammation, stress responses, and host pathogenic interactions. [10]

Rickettsia rickettsii regulates COX-2 expression, and the inhibition of COX-2 activity during an infection causes the release of prostaglandins. COX (cyclooxygenase) is the rate limiting enzyme for the breakdown of arachidonic acid (AA) into PGH2, an intermediate. The activation of COX-1, however, has no effect on Rickettsia rickettsii. The regulation of COX-2 expression in RMSF infection involves posttranscriptional control mechanisms. This organisms uses a signaling system through a p38 mitogen-activated protein kinase. Inhibition of the p38 kinase inhibits the activation of COX-2. It's still unclear whether COX-2 is responsible for rickettsia replication and triggering the RMSF infection through vascular inflammation. [15] 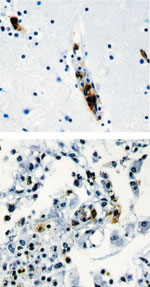 Rickettsia in endothelial cells of a blood vessel in the brain. Photo credit: Fatal Human Infection with Rickettsia rickettsii in Yucatán, Mexico from the CDC.

The Rickettsia rickettsii bacteria are intracellular organisms, and they live in the cytoplasms of host cells sometimes in the nucleus. They are adapted as intracellular organisms because they have transport systems and metabolic enzymes. These microbes take about 8 hours to undergo binary fission. [2] Rickettsia rickettsii undergo aerobic oxidation, and they live in a host-associated habitat. The optimal temperature they live in is 37 degrees Celsius, which is in the mesophilic range. [11]

Since Rickettsia rickettsii are intracellular organisms, they have a slow reproduction rate. Therefore, to replicate Rickettsia in a laboratory is inaccurate and tedious work. One method scientists use to determine the number of rickettsial particles is to make use of staining smears and observing under a microscope. Fluorescent dyes or fluorescein-labeled antibodies can be used for the staining along with bacterial suspensions. However this method can be time consuming due to the lack of reproduction in these organisms and thereby may not work well with infected live animal tissue samples. Another method is to measure 35S-labeled rickettsiae or 32P-labeled rickettsiae by using infected samples from animals and embryonic chicken eggs. However, only the live rickettsiae organisms could be measured using this procedure. [16]

Typical symptoms of RMSF can appear 2 to 14 days after exposure and include fever, headache, depression, nausea, vomiting, and gradually may develop a skin rash called purpura or petechiae. Sometimes the rash occurs 2 to 5 days after the onset of the fever. Serious cases of RMSF can include central nervous system, pulmonary, or hepatic injuries. Patients that have compromised immune systems often have an increased susceptibility to other infections. [2][9] If Rocky Mountain Spotted Fever is left untreated, there is a high mortality rate. [11] Rickettsia rickettsii can infect endothelial cells within the human body through the vascular smooth muscle cells and tissues. [5] In addition, it is an intracellular pathogen that can infect and multiply within the nucleus or cytosol of endothelial cells of the blood vessels. [9]

Rocky Mountain Spotted Fever is prevalent more commonly among children in the southeast and southcentral United States. The most incidences of RMSF occur in children 5 to 9 years old. Success in treatment of RMSF increases with initial diagnosis and treatment and reported tick bites or tick attachments prior to major symptoms. [12]

Rickettsia rickettsii strains can vary in the extent of virulence in experimental animals. In Montana scientists used guinea pigs to isolate the different virulence strains. The guinea pigs were divided into four groups: R,S,T, and U. The R type strains produced the most virulent strains, which caused severe infections, fevers, and mortality in 30% of the guinea pigs. The S and T type strains caused milder symptoms and shorter fevers. The U type strains did not produce any symptoms of Rickettsia. There were only minor differences in the structure of the Rickettsia rickettsii organism such as the lipopolysaccharide, proteins, and antigenic properties. [17]

The organism Rickettsia rickettsii has no significant contribution in forming compounds or enzymes related to biotechnology. However, it can be used as a form of a bioterrorism agent, especially using dogs to spread the infection of Rocky Mountain Spotted Fever. [14]

Currently there is a major lack in controlling the RMSF organism. In addition, an effective diagnostic test to detect early symptoms is still not available. Doctors have a hard time detecting RMSF because the patients rarely have the Rickettsia rickettsii antibodies. Although PCR (Polymerase Chain Reaction) testing is available in a few laboratories, detection of Rickettsial DNA in the blood is still lacking, especially in the early symptoms. After diagnosis with RMSF, it is usually treated with Tetracycline or Doxycycline unless the CNS has already been affected thereby using Chloramphenicol instead.[8] [9]